Chapter 4 SEWAGE AND SEWAGE TREATMENT, QUANTITY AND CHARACTERISTICS OF WASTE WATERSULLAGE:This refers to the waste water generated from bathrooms, kitchens, washing place and wash basins etc.Composition of this waste does not involve higher concentration of organic matter and it is less polluted water as compared to sewerage.

SEWAGE:It indicates the liquid waste originating from the domestic uses of water. It includes Sullage, discharge  from toilets, urinals,  waste  water  generated  from  commercial establishments, institutions, industrial establishments and also the ground water, storm water that may enter into the sewers. Its decomposition produces large quantities of malodorous gases and it contains numerous pathogenic bacteria, along with concentration of organic matter and suspended solids.

Aerobic decomposition: If air or oxygen is available freely to waste water in dissolved form ,then the biodegradable organic matter will undergo aerobic decomposition, caused by aerobic bacteria as well as by facultative bacteria. This bacteria will then utilizes the free oxygen as electron acceptor, thereby oxidizing the organic matter to stable and unobjectionable end products.The stable end products like nitrates,carbon dioxide,sulphates are formed.

Characteristics of sewage:1. Physical characteristics:a) Turbidity: Sewage is normally turbid,resembling dirty dish water.It is Measured by turbidity rod or turbidity meter.b) Colour: If the colour is yellowish,grey or light brown,it indicates fresh sewage.However,if the colour is black or dark brown,it indicates stale sewage.c) Odour: Measured as Thresold odour number (TON), which represents the extent of dilution required to just make the sample free of odour.d) Temperature: It has an effect on the biological activity of bacteria present in sewage and it also affects the solubility of gases in sewage.The normal temperature of the sewage is generally higher than the temperature of water,because of additional heat added during the utilisation of water.

b) Settleable solids: Can be determined by Imhoff cone. The capacity of the cone is 1 litre and it is graduated up to about 50ml. Sewage is allowed to stand in this cone for a period of 2 hours and the quantity of solids settled at the bottom of the cone can then directly be read out.

c) Ph  value:  It is an indicator of the alkalinity of the sewage.The lesser is the Ph value,lesser is the alkalinity.It's determination is important because of the fact that efficiency of certain treatment methods depends upon the availability of a suitable Ph value.

f) Presence  of  fats,  oils  and  greases:  It  interferes  with  treatment  process  like filtration so needs to be removed.

h) Dissolved oxygen: (DO): The DO content of sewage is determined by Winkler ’s method. While discharging into streams, DO in sewage must be more than 4ppm to protect fish.If the temperature of the sewage is more,DO content will be less.

i) Chemical oxygen demand: Oxygen required to completely oxidize the organic matter to CO2,H2O and other oxidised species.

j) Total organic carbon: Another important method of expressing organic matter is in terms of its carbon content.Known concentrations of chemical components in waste water will enable us to calculate carbon content present in sewage.

Bio chemical oxygen demand (BOD): The amount of oxygen required to decompose the organic matter present in sewage is called BOD.The BOD of water during 5 days at 20º C is generally taken as the standard demand and is about 68% of the total demand.BOD5 : BOD during 5 days at 20º CBOD5 = D.O consumed by diluted sample × 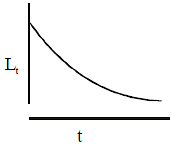 Relative stability :It is the ratio of of oxygen available in effluent to the total oxygen required to satisfy its first stage BOD demand.