The document Worksheet Question - Understanding Elementary Shapes Class 6 Notes | EduRev is a part of the Class 6 Course Mathematics (Maths) Class 6.
All you need of Class 6 at this link: Class 6

Ques 1: Match the column B with A and C:

Ques 2: A sailor is rowing a boat due north. In which direction will he be rowing if he turns it through (i) a straight angle (ii) a complete angle
Ans: (i) South(ii) North

Ques 3: You are standing in a class-room facing north. In what direction will you be facing after making a quarter turn in clockwise direction?
Ans: East

Ques 5: Identify the following triangles according to the measurement of sides and angles given. Also mention the type of triangle: 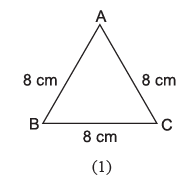 Ques 7: Complete the following table:
(One is done as example-sphere)