Gross Commanded Area: It is the total area bounded within the irrigation bounding of a project,which can be economically irrigated without considering the limitation of the quantity of available water. It includes the cultivable as well as the non-cultivable area.Culturable Commanded Area: It is the part of GCA on which cultivation is possible.Intensity of irrigation: Ratio of the actually irrigated area during a crop season to the net CCA.Annual irrigation intensity: It is the ratio of area irrigated during the entire year to the CCA.Time factor: It is the ratio of the number of days the canal has actually to run, to the base period in days.Capacity factor: It is the ratio of the mean supply discharge to the full capacity discharge.Shear stress or average unit tractive force of canal.(1/1000) = gw. R.SS → slope (bed)R → hydraulic mean depthgw→ Unit weight of waterManning's formula :

Kennedy's theory: RG Kennedy investigated canals systems for twenty years and come up with a Kennedy’s silt theory. The theory says that, the silt carried by flowing water in a channel is kept in suspension by the eddy current rising to the surface.The vertical component of the eddy current tries to move sediment up whereas sediment weight tries to bring it down. Therefore, if adequate velocity available to create eddies so as to keep the sediment just in suspension silting will be prevented.

Initial regime: When only the bed slope of a channel varies and its c/s or wetted perimeter remains unaffected even then the channel can exhibit no silting, no scouring properties is called initial regime.Final regime:If there is no resistance from the sides and all the variables such as perimeter, depth, slope etc. are equally free to vary and finally get adjusted according to discharge and silt grade then the channel is said to have achieve permanent stability called final regime.

Lacey's theory:According to lacey’s, the design procedure to build canal is as follows :-Canal discharge (Q) and mean particle size (dm) should be known.-From the mean size or diameter of the particle (dm), silt factor is first calculated using the below expression :

Using discharge and silt factor, velocity (V) can be calculated by the expression as follows: 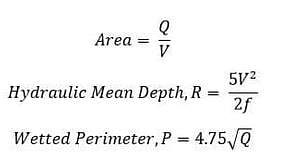 Assume the bed slope (S) value or find by substituting the values of silt factor and canal discharge in the following formula :

Drawbacks of Lacey’s Silt Theory:-Lacey did not explain the properties that govern the alluvial channel.-In general, flow is different at bed and sides of the channel which requires two different  silt factors but Lacey derived only one silt factor.-The semi-elliptical shape proposed by Lacey as the ideal shape of the channel is not convincing.-Lacey did not consider the silt concentration in his equations.-Attrition of silt particles is ignored by Lacey.-Lacey did not give proper definitions for the silt grade and silt charge.