Road maintenance is one of the important components of the entire road system. The maintenance operations involve the assessment of road condition diagnosis of the problem and adopting the most appropriate maintenance steps.

GENERAL CAUSES OF PAVEMENTFAILURESSome of the general causes of pavement failures needing maintenance measures may be classified as given below :

(a) Defects in the quality of materials used.

(c) Inadequate surface or subsurface drainage in the locality resulting in the stagnation of water in the subgrade or in any of the pavement layers.

(d) Increase in the magnitude of wheel loads and the number of load repetitions due to increase in traffic volume.

(e) Settlement of foundation of embankment of the material itself.

Failures in Sub-base or Base Courses

Following are the chief types of sub-base or base course failures : 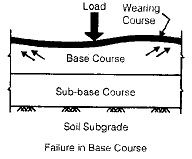 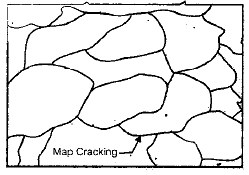 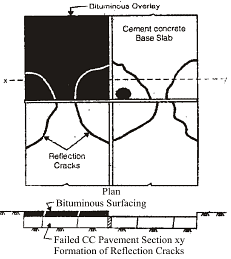 Deficiency of Pavement Materials Following are the chief causes which would give rise to the different defects or failures of cement concrete pavement :

The various defects that creep in due to the above are :

Inadequate subgrade support pavement thickness would be a major cause of developing structural cracking in pavements. Following are the cause and types of failure which develop :1. Inadequate pavement thickness2. Inadequate subgrade support and poor subgrade soil3. Incorrect spacings of joints.Above would give rise to the failures of the following types :1. Cracking of slab corners2. Cracking of pavements longitudinally.3. Settlement of slabs4. Widening of joints5. Mud pumping

Following are the factors which cause the mud pumping :1. Extent of slab deflection2. Type of subgrade soil3. Amount of free water 

The patch repair work is carried out by first cutting out a rectangular shape of the defective area to remove the stone up to the affected depth.