Aeroplanes fly in this zoneVapour, clouds, storms presentAbout ¾ of total weight of atmosphere lies in this zone

2. Stratosphere: Temperature slightly increases in this zone.– 80ºC to 0ºC The increase in temperature is due to absorption of U.V. radiation in stratosphere. Ozone concentration 5 ppm.

3. Mesosphere: temperature decreases from   0ºC to – 110º C atmosphere is windy and turbulent. Too little water vapour for clouds to form.

PRIMARY POLLUTANTS:1. CO:Produced  by  burning  of  organic  material.  Automobiles  are  biggest  source. Cigarette smoke is another major source. It is toxic because it binds to hemoglobin, reduces oxygen in blood. It is not a persistent pollutant, it combines with oxygen to from CO2.

2. SO2:Produced by burning sulfur containing fossil fuels, coal burning power plants are major  source.  Reacts  in atmosphere  to  produce  acids.  It  is  one  of  the  major components of acid rain when inhaled, can be very corrosive to lung tissue. Main culprit for Asthma.

4. Hydrocarbons: These are compounds with hydrogen and carbon. These are from incomplete burning or evaporated from fuel supplies. Major source is automobiles, but some from industry. Contribute to  mog.Improvements in engine design have helped to reduce.

SECONDARY POLLUTANTS:1. Ozone: Ozone ( O3) is highly reactive gas composed of tree oxygen atoms. It is both a natural and a manmade product that occurs in the earth’s upper atmosphere (the stratosphere) and lower atmosphere (the troposphere). Tropospheric ozone what we breathe is formed primarily from photochemical reactions between two major classes of air pollutants, volatile organic components (VOC) and nitrogen oxide (NOx)

2. PAN  (Peroxy  Acetyl nitrate): Smog  is  caused  by  the  interaction  of  some hydrocarbons  and  oxidants under  the  influence  of sunlight  giving  rise  to dangerous PAN

3. Photochemical Smog: It is a mixture of pollutants which includes particulates, nitrogen oxide, ozone, aldehydes, PAN, unreacted hydrocarbons etc. The smog often has a brown haze due to presence of nitrogen dioxide. It causes painful eyes.

2. Settling chambers: Settling chambers use the force of gravity to remove solid particles. The gas stream enters a chamber where the velocity of the gas is reduced.  Large  particles  drop  out  the  gas  and  are  collected  in happens. Because settling chambers are effective in removing only larger particles they are used in conjunction with a more efficient control device.

3. Cyclones: The general principle of inertia separation is that the particulate. Laden gas is forced to change direction.As gas changes direction, the inertia of the particles causes them continue in the original direction and be separated from the gas stream. The walls of the cyclone narrow toward the bottom of the unit, allowing the particles to be collected in a hopper. The cleaner air leaves the cyclone through the top of the chamber, flowing upward in a spiral vortex, formed within a downward moving spiral. Cyclones are efficient in removing large particles but are not as efficient with smaller particles. For this reason they are used with other particulate control devices.

4. Venturi scrubbers: Venturi scrubbers use a liquid stream to remove solid particles. The air and water are allowed to pass through a venture kind of narrow tube so the velocity increase and particulate matter mixed with water and at end they will drop because of less velocity. There are effective in removing small particles with efficiency of up to 99%.

5. Electrostatic precipitators: An ESP is a particle control device that uses electrical forces to move the particles out of the flowing gas stream and onto collector plates. The ESP places electrical charges on the particles, causing them  to  be attracted  to  oppositely  charge mental  plates  located  in  the precipitator.  The  particles  are  removed from  the  plates  by  rapping  and collected in a hopper located below the unit.

6. Fabric filters: They remove dust from a gas stream by passing the stream through a porous fabric. The fabric filter is efficient at removing fine particles and can exceed efficiencies of 99%.

1. Absorption:  It is a process in which a gaseous pollutant is dissolved in a liquid.

2. Adsorption: When a gas or vapour is brought into contact with a solid, Part of it is taken by the solid. The molecules that disappears from the gas either enter the inside of the solid, or remain on the outside attached to the surface.The former phenomenon is termed as absorption (Dissolution) and the latter adsorption.

4.   Incineration: Incineration  also  known  as  combustion  is  most  used  to control the emissions of organic compounds from process industries.

Air pollution meteorology: Lapse rate: In troposphere the temperature of ambient air normally decreases with an increase in height.The rate of change of temperature is called lapse rate. It differs from place to place and time to time. The prevailing large rate at a place at particular time is called environmental lapse rate (ELR) Adiabatic lapse rate: As the air parcel moves up, its temperature decreases as its own heat energy is expanded due to increase in the volume of the air parcel. Using the law of conservation of energy and gas laws, it has been possible to calculate the rate of decrease of temperature with height, called adiabatic lapse rate (ALR) Depending upon the relative positions of two lines ALR and ELR on the graph sheet, the stability of the environment is determined.(A) 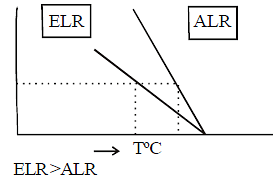 The rising parcel is always warmer then Atmosphere and it accelerate in going up.Similarly descending parcel is always cooler than surrounding air and this also  accelerate  in  coming down.  The  environment  is  unstable  and dispersion of pollutants will be rapid. The prevailing ELR is called super adiabatic lapse rate.(B) 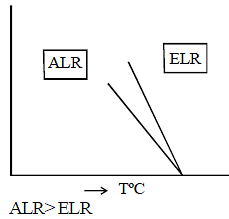 In  this  case  environment  is  said  to  be stable and prevailing ELR is called sub- adiabatic lapse rate.

There are two types of inversions: 1. Radiation inversion 2. Substance inversion

1. Radiation inversion: It happen when earth cools rapidly then the air.

Plume types: Plume types are important because they help us understand under what conditions there will be higher concentrations of contaminants at ground level.

1. Looping plume: It has a wavy character and occurs in super adiabatic environment, which produce highly unstable atmosphere, because of rapid mixing.

2. Neutral plume:  It is upward vertical rise of plume from stock. It occurs when ELR=ALR.

3. Coning  plume: The  neutral  plume  tends  to  cone  when  the  wind velocity greater than 32Km/hr and it also occurs under sub adiabatic conditions.

5. Lofting plume: They are created when atmospheric conditions are unstable above and stable below.Pollutants go up into environment. Favorable plume.

6. Fumigating  plume: Most  dangerous  plume.  Contaminants  are  all coming  down  to  ground  level.They  are  created  when  atmosphere conditions are stable above the plume and unstable below.