Q.1. Reena collected the data for the ages (in years) fo her hobby class group and she records the findings in the manner shown below :

Represent the above data using tally marks in the table below :

Q.2. The bar graph below is showing the liking of different fruits by students : 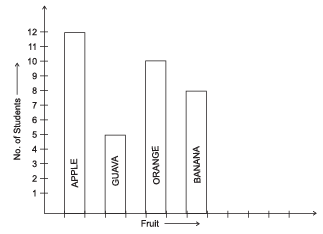 Ans.(i) The fruit is liked by most students is Apple.(ii) 10 students like the fruit orange(iii) Number of students who like banana = 8

Q.3. Following is the production of cars in six months by a company.

Take 1 unit = 200 cars and draw a bar graph to represent the information. Q.4. Following is the pictograph of class VI students. Here 1

= 10 girls. Looking at the pictograph below, answer the following questions.

Q.5. Number of students present in calss VI during a particular week are given below. It is represented by a pictograph where 1