The document Chapter Notes 1 - Chapter 6 : Physical and Chemical Changes, Class 7, Science | EduRev Notes is a part of the Class 7 Course Science Class 7.
All you need of Class 7 at this link: Class 7 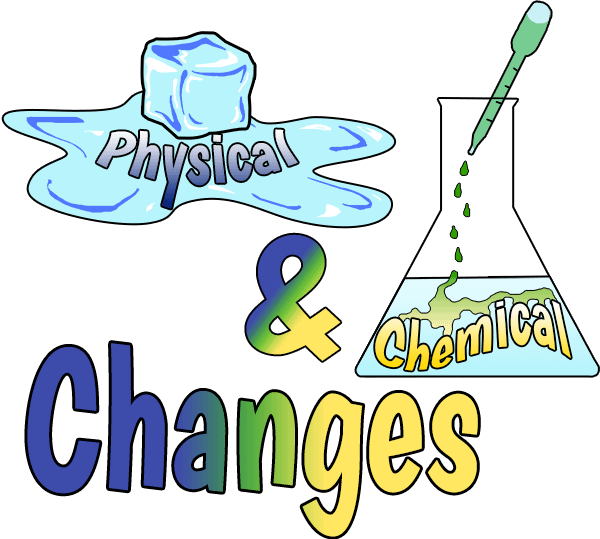 Some properties of physical changes are:

Some properties of chemical changes are:

A chemical change is permanent. A new substance is formed. Forms of energy, such as heat, light or electricity, may be emitted or absorbed during a chemical reaction.A chemical change is generally irreversible.Crystallisation is a physical change, since the process involves a change in the state of matter. No new substance is created in the process of crystallisation. Water and oxygen in the air react with iron to create a new substance called rust. The properties of rust are different than that of iron. This is a chemical change. The rusting of iron can be prevented by coating iron with something else, such as paint, or with zinc through a process called galvanisation. The process of galvanisation is also used in many other places, such as to prevent the rusting of iron pipes that carry water to our homes.

Crushing of a chalk piece

Chemical change is a permanent change in which new substances are formed with different properties along with the evolution or absorption of some kind of energy.

Some examples for chemical change are:

♦ Crush a chalk into powder. Then add some water to the chalk dust to make it into a paste, and then roll it into a chalk. Again, this is nothing but a change in the size of a substance, which is a change in a physical property.

o Take some ice in a tumbler. Place the tumbler in sunlight. Some ice melts into water. This is change in the state of a substance is a change in a physical property.

o Take some cold water in a container and then heat it so that at a particular temperature, it starts boiling. You can observe steam rising from the surface, which is nothing but a change in the physical state of a substance. The vapours can be condensed back into liquid by placing an inverted container over the vessel.o Hold a hacksaw blade with the help of a pair of tongs over the flame of a gas stove for some time.o There is a change in the colour of the blade. On cooling, the blade returns to its original colour. This is nothing but a change in the colour of a substance, which is a change in a physical property.o All these changes indicate a change in physical properties, like size, state and colour.If articles made of iron are left in open air for some time, they get coated with a brown powdery substance, called rust. This process of iron changing into rust is called rusting.

Rusting of iron occurs only if iron comes in contact with moist air.

The process of rusting can be represented as: No rusting occurs if iron comes in contact with only water or air. Moist air contains both oxygen and water, and hence, iron gets rusted easily. Rust is a chemical change that causes huge damage to iron articles like cars, ships, rails, bridges, machines, etc.If we prevent iron articles from coming in contact with air or water, or both, then rusting can be stopped.

Some methods to prevent rusting are:

Oiling and greasing: A thin layer of oil or grease on an iron object prevents it from coming in contact with moist air. Thus, rusting can be stopped.

Painting: If iron articles like gates, chairs, bodies of cars, trucks, ships, etc. are painted, then it prevents moist air from coming in contact with iron. Hence, rusting stops.

Coating with other metals: When iron sheets are dipped in molten zinc, a thin layer of zinc gets coated over the sheets.This is called galvanised iron.

This zinc layer prevents iron from coming in contact with moist air, and stops rusting.

Converting iron into stainless steel: Molten iron is mixed with a certain amount of carbon, chromium and nickel to form an alloy called stainless steel. This doesn't rust in moist air. So it is used for making household utensils and surgical instruments.