The document Chapter Notes - Depreciation, Provisions and Reserves - Accountancy, Class 11 | EduRev Notes is a part of the Commerce Course Accountancy Class 11.
All you need of Commerce at this link: Commerce

LEARNING OBJECTIVESAfter studying this lesson you will be able to:

Depreciation Concept: Fixed assets are held on a long term basis and used to generate periodic revenue. That portion of assets, which is believed to have been consumed or expired to earn the revenue, needs to be charged as cost. Such an appropriate proportion of the cost of fixed assets is called Depreciation.Business enterprises require fixed assets for their business operations such as furniture and fixtures, office equipments, plant and machinery, motor vehicles, land and building etc. In the process of converting Raw material into finished products, the fixed assets depreciate in value over a period of time, i.e. its useful life.In other words, the process of allocation of the cost of a fixed asset over its useful life is known as depreciation.According to accounting standard- 6 (Revised) issued by the ICA "Depreciation is a measure of wearing out, consumption or other loss of value of a depreciable asset arising from use, effusion of time or obsolescence through technology and market changes. Depreciation is allocated so as to charge a fair proportion of the depreciable in each accounting period during the expected useful life of the asset. Depreciation includes amortization of assets whose useful life is predetermined.

1. Obsolescence- When a fixed tangible assets become useless or unwanted due to new invention.

2. Amortization- The term amortization is used for writing off intangible assets such as goodwill, copyright, patents, etc.

3. Depletion- The term depletion is used in relation to decreasing the value of wasting assets or natural resources such as mines, oil wells, timber trees & fishing etc. due to the continue removal or extraction of things.

Need or objectives of providing Depreciation

(i) The true profit of an enterprise can be ascertained when all cost; incurred for the purpose of earning revenues have been debited to the profit and loss account.(ii) Fall in the value of assets used in business operations is a part of the cost and should be shown in the profit and loss account of concerned accounting period.(iii) Keeping this in view, depreciation must be debited to profit & loss account, since loss in value of fixed assets is also an expenses like other expenses.

(i) Income tax of an enterprise is determined after charging all the costs of production.

(ii) If depreciation is not charged, the profits will be higher and the income tax will also be higher.

(iii) If depreciation is charged, Tax liability is reduced.

5. Provision of funds and replacement of assets: Depreciation is a non-cash expense. So that amount of depreciation charged to profit and loss accounts is retained in business every year. These funds are available for replacement of the assets when its useful life is over.

(i) This method is also known as 'original cost method'

(ii) Under this method, depreciation is charged at fixed percentage on the original cost of the asset, throughout its estimated life.

(iii) Under this method, the amount of depreciation is uniform from year to year. That is why this method is also known as 'Fixed Installment Method' or 'Equal installment method'.

(iv) The annual amount of depreciation can be easily calculated by the following formula :

For example: A firm purchases a machine for Rs. 2,25,000 on April 1,2013. The expected life of this machine is 5 years. After 5 years the scrap of this machine would be realized Rs. 25.000. Under straight line method, the amount of depreciation can be calculated as under:

Hence, in Straight Line method, amount of depreciation is same but in Diminishing Balance Method amount of depreciation goes on decreasing every year. Depreciation can be recorded by crediting it to the Assets account.Illustration 1: On January 1, 2013, a firm bought a machine for Rs.90,000 and spend Rs.6,000 on its installation and Rs.4,000 on its carriage. It is decided to charge depreciation @ 10% on straight line method. Books are closed on December 31st each year. Show Machinery Account for the year 2013 to 2015.Solution: Machinery Account Illustration 2 : On the basis of information given in Illustration 1, Prepare machinery Account for the year 2013 to 2015 if depreciation is charged @ 10% on diminishing balance method. 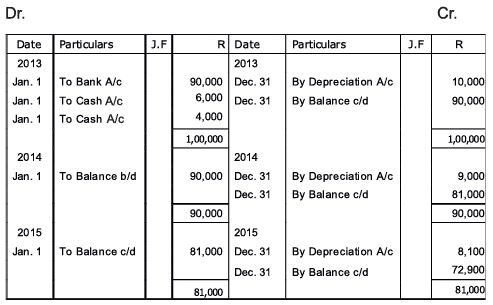 Illustration 5: Vinod limited purchased a machine for Rs.2,50,000 including installation cost on January 1, 2012. On October 1, 2014, machine was sold for Rs.1,50,000. Depreciation was provided @ 10% p.a. on Fixed Installment method and accounts are closed on December 31, each year.Show the Machinery Account and Provision for Depreciation Account for the year. 2012 to 2014.Solution: Machinery Account 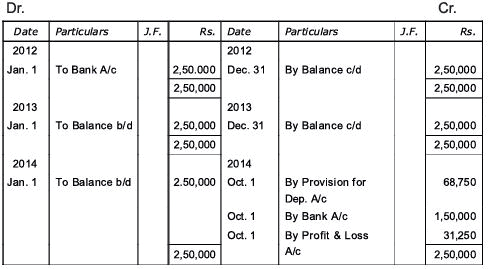 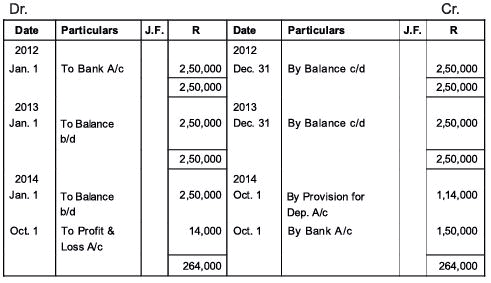 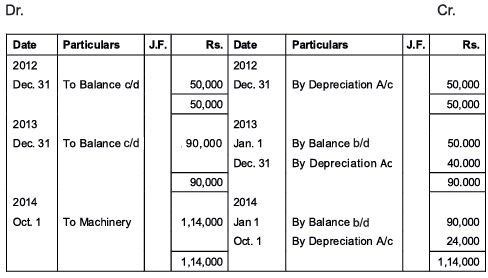 Illustration 7: A Company purchased a machine for Rs. 40,000 on April 1, 2014. On October 1, 2015 it was sold for Rs. 13,000. The company charges depreciation @ 10% p.a. on straight line method.Show Machinery Account, Provision for Depreciation Account and Machinery Disposal account if books are closed on March 31 each year.Machinery Account 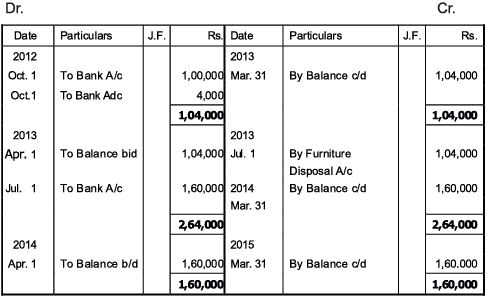 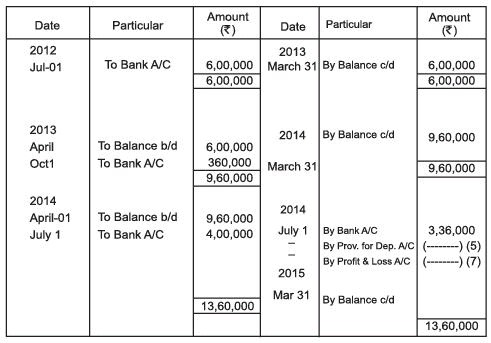 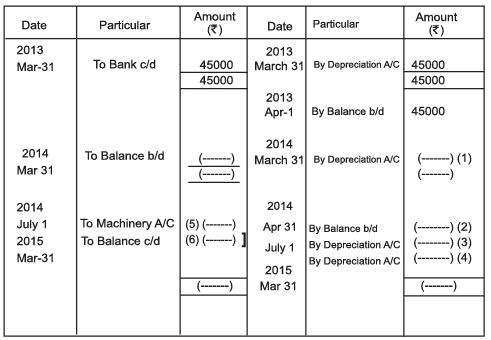 Asset Disposal A/C is opened when an asset (partially or fully) is sold or disposed off. All entries related to sold asset are recorded in the asset disposal A/C. Methods of recording the entries in Asset Disposal A/C will depend on a fact whether a provision for depreciation a/c is maintained or not.Format of Assets Disposal Account

Illustration No. 12: (Problem based on missing figures) Fill up the missing figures in the plant Account given below. You are informed that the plant purchased on 1st Oct 2012 was sold on 1 st April, 2014 for Rs.95,000 . The depreciation is provided at the rate of 10% p.a on diminishing balance by the company.

Q.No.5: Fill up the missing information in the machinery account, provision for Depreciation Account and Disposal Account. You are informed that on 30th June 2008 it sold off the first machine purchased in 2006 for Rs. 5,24000 Accumlated Depreciation Account in maintained changing depreciation @ 10% on straight line method. 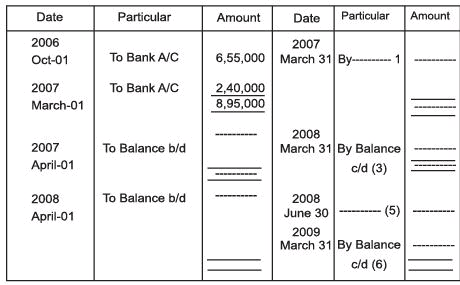 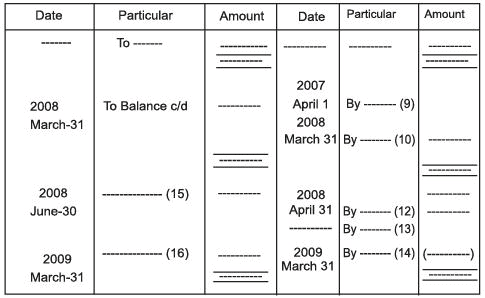 DIFFERENCE BETWEEN PROVISIONS AND RESERV 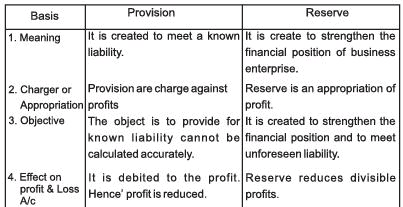 Revenue Reserves are those reserves which are created by setting aside a part of the net profit of business. Since reserves represent undistributed profit of the company so they are available for declaration of dividend and distribution among shareholders.

(1) General Reserves : Those reserves which are created out of profit to meet out the unforseen contigencies is called general reserves. They are termed as 'Free Reserves' or 'Contingency Reserves'. Creation of general reserve is optional. It is an appropriation of profit so it is made only if adequate profit is earned by the company. They are shown on liability side of the balance sheet under the head,"Reserve and surplus".

(2) Specific Reserves:- These reserves are created for specific purpose and can be utilised for that purpose only.

Examples:-Divindend Equalization Reserves, Debentures Redemption Reserve, workman Compensation fund, Investment Reserves etc.Reserve fund: If reserves are invested in outside securities, it is known as Reserve fund.Capital Reserves: The reserves created out of capital profits are known as capital Reserve. Such reserves, generally are not available for distribution as cash dividend among the share holders of a company.

Capital profits can be used to write off capital losses and to issue fully paid up bonus shares among the equity share holders. However, company can declare dividend out of capital profits on the fulfilment of the following conditions.

i) Articles of Associations of a company permits the declaration of dividend out of such profile.ii) Capital profits realised in cash.iii) Profile remains after revaluation of assets and liabilities.