The document Chapter Notes: Chapter 1 - Environment, SST, Class 7 | EduRev Notes is a part of the Class 7 Course Social Studies (SST) Class 7.
All you need of Class 7 at this link: Class 7

The word ‘Environment’ is derived from the french word “Environer/ Environner” meaning “neighbourhood”.The natural factors, places, people, things, etc. that surround a living organism is called the environment. It is a combination of both natural as well as man-made phenomena. The natural environment comprises of biotic and abiotic conditions, whereas the man-made phenomena comprise the activities and interactions among human beings.

Everything around us that is natural and not made by humans is a part of the natural environment.

(ii) Lithosphere, atmosphere, hydrosphere and biosphere are the four domains of the natural environment. 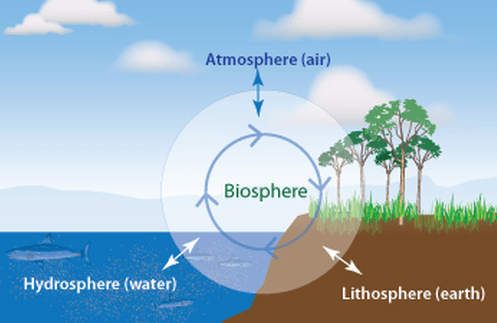 Domains of the Environment:

What is an Ecosystem?