The document Chapter Notes - Federalism Class 10 Notes | EduRev is a part of the Class 10 Course Social Studies (SST) Class 10.
All you need of Class 10 at this link: Class 10

What is federalism?1. Federalism is a system of government in which the power is divided between a central authority and various constituent units of the country.2. Federalism has two levels of government:a. One is the government for the entire country that is usually responsible for a new subject of common national interest.b. The others are governments at the level of provinces or states that look after much of the day-to-day administering of their state. 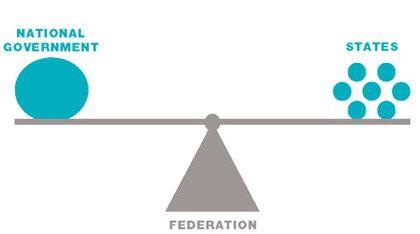 3. Federations are contrasted with unitary governments.4. Under the unitary system, either there is only one level of government or the sub-units are subordinate to the central.5. In a federal system, the central government cannot order the state government to do something.Let us look at some of the key features of federalism:(i) There are two or more levels (or tiers) of government.(ii) Different tiers of government govern the same citizens, but each tier has its own JURISDICTION in a specific matter of legislation, taxation and administration.(iii) The jurisdictions of the respective levels or tiers of government are specified in the Constitution.(iv) The fundamental provisions of the Constitution cannot be unilaterally changed by one level of government.(v) Courts have the power to interpret the Constitution and the powers of different levels of government.(vi) Sources of revenue for each level of government are clearly specified to ensure its financial autonomy.(vii) The federal system thus has dual objectives: to safeguard and promote the unity of the country, while at the same time accommodate regional diversities.(viii) There are two kinds of routes through which federations have been formed.(a) The first route involves independent States coming together on their own to form a bigger unit so that by pooling sovereignty and retaining identity they can increase their security. This is ‘coming together’ federations.(b) The second route is where a large country decides to divide its power between the constituent States and the national government. This is ‘holding together’ federations.What makes India a federal country?1. The constitution declared India as the Union of States.2. The Constitution originally provided for a two-tier system of government, the Union Government or what we call the Central Government, representing the Union of India and the State government.3. Later the third tier of federalism was added in the form of Panchayats and municipalities.

4. The Constitution contains three lists:(I) Union Lists includes subjects of national importance such as defence of the country, foreign affairs, banking, communications and currency.(II) State Lists contains subjects of States and local importance such as police, trade, commerce, agriculture and irrigation.(III) Concurrent List includes subjects of common interest to both the Union Governments, such as education, forest, trade unions, marriage, adoption and succession.How is federalism practiced?1. Constitutional provisions are necessary for the success of federalism but these are not sufficient.2. The real success of federalism in India can be attributed to the nature of democracy politics in our country.Linguistic States:1. The creation of linguistic states was the first and a major test for democratic politics in our country.2. Many old States have vanished and many new States been created.3. In 1947, the boundaries of several old states of India were changed in order to create new States.4. This was done to ensure that people who spoke the same language lived in the same States.5. When the demand for the formation of States on the basis of language was raised, some national leaders feared that it would lead to the disintegration of the country.Language Policy:1. The second test for Indian Federation is the language policy.2. Our Constitution did not give the status of national language to any one language.3. Hindi was identified as the official language.4. According to the Constitution, the use of English for official purposes was to stop in 1965.5. The central government responded by agreeing to continue the use of English along with Hindi for official purposes.6. Promotion does not mean that the Central Government can impose Hindi on states where people speak a different language.Centre-state relation:1. Restructuring the centre-state relations is one more way in which federalism has been strengthened in practice.2. In 1990 there was the rise of regional political parties in many States of the country.3. This was also the beginning of the era of COALITION GOVERNMENT at the Centre.4. Since no single party got a clear majority in the Lok Sabha, the major national parties had led to enter into an alliance with many parties.5. This led to a new culture of power sharing and respect for the autonomy of State Government.6. Thus, federal power sharing is more effective today than it was in the early years after the Constitution came into force.Decentralization in India:1. We noted above that federal government has two or more tiers of government.2. But a vast country like India cannot be run only through these two-tiers.3. Federal power sharing in India needs another tier of government4. This resulted in a third-tier if the government called local government.5. When power is taken away from Central and State government, it is called decentralisation.6. As the local level, it is possible for the people to directly participate in decision making.7. A major step towards decentralisation was taken in 1992.8. The rural local government is popularly known by the name panchayati raj.9. This is a council consisting of several ward members, often called panch, and a president or sarpanch.10. They are directly elected by all the adult population living in that ward or village.11. It is the decision-making body for the entire village.12. All the panchayat Samiti or mandals in a district together constitute the Zilla Parishad.13. Local government bodies exist for urban areas as well.14. Big cities are constituted into municipal corporations.15. This new system of local government is the largest experiment in democracy conducted anywhere in the world.