A fraction shows part of a whole. The whole can be a region or a collection.

1. Fraction as a Part of WholeAnkita ordered a pizza for herself. 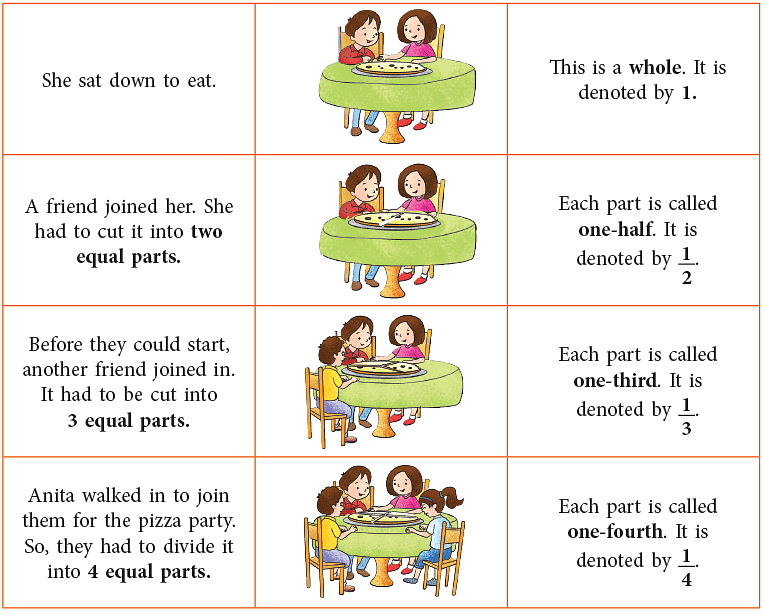 Similarly, we can have more equal parts as under:

Riya had a loaf of bread which she divided into 3 equal pieces, one for herself and one each for Ritu and Aditi. But Aditi insisted on taking two pieces. Aditi, therefore, got 2 out of 3 equal parts, which is expressed as two-thirds or 2 / 3 in the language of fractions.Similarly, we may define some more fractions as under by colouring the parts.

What fraction represents a whole?

Now, Try Yourself: Write any four fractions equal to 1.

The line between the numerator and denominator also has a special name, It is called fraction bar.Each fraction is written as:

Fractions on the Number Line

Similarly, we can divide the unit segment into as many equal parts as we like.

Draw a line. Mark the points A and B for the whole numbers 0 and 1 respectively. Since, the denominator is 7, the total number of equal parts are 7. So, divide the unit segment into 7 equal parts. The numerator 4 shows that 4 parts are to be taken.

Each division = 1 / 7.Starting from point A, the fourth point of division P represents the required fraction.

Example 2: Write the fraction represented by point O, on the given number line.

AB has been divided into 11 equal parts. Point O shows that 2 parts are taken. Hence, the fraction that represents the point O = 2 / 11.

Fractions that have the same denominator are called like fractions.

Fractions that have different denominators are called unlike fractions.

Such fractions which represent the same part of an object, though differing in numerals, are called equivalent fractions.

The term equivalent is derived from the words ‘equal’ and ‘value’.

Edurev Tips: The numerator and denominator of a fraction are called terms.

How to Find Equivalent Fractions?

The equivalent fractions given above are all equal to 1 / 2.They can also be written as:

Hence, the next four fractions equivalent to

Example 4: Write the numeral that should replace the question mark to make each sentence true.

The numerator 6 has been multiplied by 2 to get 12. So, multiply the denominator also by 2.

The denominator 9 has been multiplied by 3 to get 27. So, multiply the numerator also by 3.

You can also use division to find equivalent fractions.

Example 5: Write the numeral that should replace the question mark in the following to make the given sentences true.

The numerator 10 has been divided by 2 to get the numerator 5. So, we divide the denominator also by 2.

Checking whether given Fractions are Equivalent or Not

What do you observe about the products?Ans: They are equal.This shows that two fractions are equivalent if their cross products are equal.

Aman and Aditi were painting a wall.

It is clear from the given figures that:

From the above discussion, we arrive at the following rule.

To Compare Fractions with the Same Numerator

The following figures represent fractions with the same numerator.

It is clear from the above figures that, 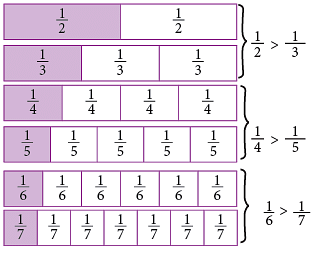 From the above discussion, we arrive at the following rule:

Example 6: Fill in the

Edurev Tips: Like fractions with greater numerator are greater.

Here, the fractions in ascending order are

(b) The fraction with the greater denominator names the smaller fraction.

Here, the fractions in ascending order are

(a) The given fractions have the same denominator. So, they are like fractions.The fraction with the greater numerator names the greater fraction.

Thus, the fractions in descending order are:

(b) The given fractions have the same numerator.The fraction with the smaller denominator names the greater fraction.

Thus, the fractions in descending order are:

Reducing a Fraction to its Lowest Form

Edurev Tips: We start by trying to divide both the numerator and the denominator by common factors, from the lowest to the highest, till the only common factor is 1.

The fractions which have 1 as the numerator are called unit fractions.

A fraction in which the numerator is less than the denominator is called a proper fraction.

A mixed number is a mixture of a whole number and a proper fraction.

is an expanded numeral.

is a compact numeral.

is called a mixed numeralor a mixed number, since part of the numeral is a whole number, 3 and part is a fractional numeral, 1 / 4.Observe the following:

(a) Converting an Improper Fraction into Mixed NumberSuppose Vibha’s mother wants to distribute 17 mangoes among 5 children. 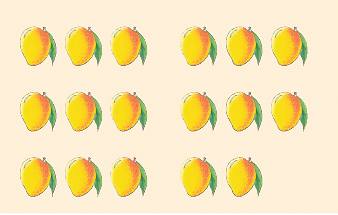 into an improper fraction.

(c) Using Division to Find Fractional Part of a Whole NumberPriya had 8 oranges. She gave half of them to her sister Teena. How many did each of them get? 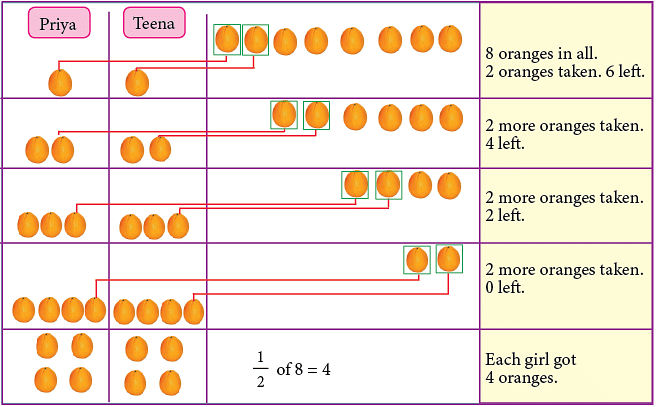 Mamta’s mother has a bar of chocolate. She divided it into 8 pieces and gave one piece to Mamta and two pieces to her brother Mayank.What fraction of the whole chocolate did she distribute between them?

Look at the other examples:

You can also use a number line to show the addition of fractions. The following number line shows the sum of 2 / 7 and 3 / 7.

The above example shows that:

Madhavi had four-fifth of a cake. She gave one-fifth of it to Ashu. How much cake is left with her?Clearly, this is a problem of subtraction. So, cake left with her

which can also be written as:

Subtraction can also be shown on a number line as under: