The document Chapter Notes: Chapter 4 - In The Earliest Cities, Class 6, SST (History) | EduRev Notes is a part of the Class 6 Course Social Studies (SST) Class 6.
All you need of Class 6 at this link: Class 6

The Story of Harappa:

i) British discovered a mound while building Railways.

iii) Harappa was the first to be discovered, it became Harappa Civilisation.

(i)  Harappan cities were well-planned.

(ii)  All houses were built of burnt bricks and were of good quality.

(iii) The most imposing construction of Indus valley was the Great Bath at Mohenjodaro. 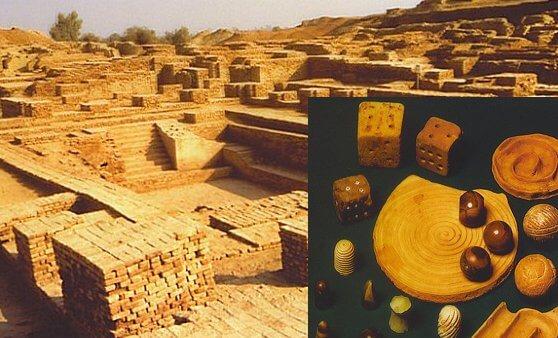 (iv) The Harappan settlements had small citadels. It was in citadels that structures were built for special public purposes.

(v) The largest building excavated at Harappa was the Great Granary.

(vi) The most striking feature of Harappa was the well-planned drainage system.

Life of the Harappa People:

(ii)  Pots of fine clay were made. (iii) Many kilns for baking bricks have been discovered.

(iv) Of the various articles, seals were the most puzzling.

(v) Necklaces, armlets, finger rings and bangles were worn both by men and women. Both men and women seemed to be fond of ornaments.

(i) Trading thrived in Harappa.

(iii) Goods coming from outside, including copper from Rajasthan, gold from Karnataka and precious stones from Iran and Afghanistan.

(iv) Seals of Mesopotamia have been found in Indus.

(v) Seals of Indus Valley have been found in Mesopotamia.

i) Two famous Harappan cities of Gujarat were Dholavira and Lothal.

ii) Dholavira was full of traces of freshwater and fertile soil.

iii) Lothal was an important center for making objects out of stone, shell and metal.

Decline of the Indus Valley Civilisation:

(ii) Perhaps Indus Valley Civilisation was destroyed by earthquakes, floods or change in the course of the Indus.

(iii) Some historians say that the invasion of Aryans led to the decline of Harappan civilization.