The document Chapter Notes: Chapter 1 - On Equality, SST, Class 7 | EduRev Notes is a part of the Class 7 Course Social Studies (SST) Class 7.
All you need of Class 7 at this link: Class 7

Equality is a condition in which adequate opportunities are given to all. In a democratic country like India, adults, irrespective of their religion, caste education, status or place of birth, are given the right to vote under Universal Adult Franchise. Try yourself:According to Universal Adult Franchise every adult has:
Explanation

Universal Adult Franchise means that the right to vote should be given to all adult citizens without the discrimination of caste, class, colour, religion or gender. Every adult has one vote. It is based on equality, which is a basic principle of democracy.

View Solution
Other Kinds of Equality

Apart from being poor, people in India experience inequality, which is based on the caste system. 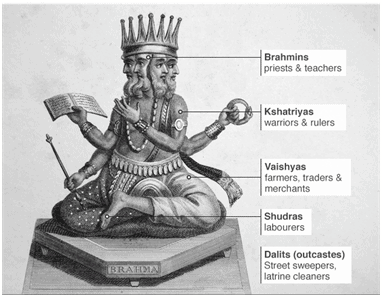 When people are treated unequally, their dignity is violated. Dignity is the right of a person to be valued and respected for their own sake and to be treated ethically. Whether Rich or Poor dignity of every person is important.

Against this what does the Constitution of India Say?

Excerpt from Article 15 of the Indian Constitution:

Example:Omprakash Valmiki is a famous Dalit writer who has written an autobiography, Joothan Problems faced by AnsariMr. and Mrs. Ansari were looking to rent an apartment in the city. They had the money and so paying the rent was no problem.

Omprakash Valmiki (30 June 1950 – 17 November 2013)
He was born in the village of Barla in Muzzafarnagar district of Uttar Pradesh.
He was an Indian Dalit writer and poet, well known for his autobiography, Joothan.
Joothan was considered a milestone in Dalit literature.

Parliament is the Cornerstone of Our Democracy

Mid-day meal (MDM) is a wholesome freshly-cooked lunch served to children in government and government-aided schools in India.

On 28 November 2001, the Supreme Court of India passed a mandate stating, "We direct the State Governments/Union Territories to implement the Mid Day Meal Scheme by providing every child in every Government and Government-assisted Primary School with a prepared midday meal."

Benefits of the Midday Meal Programme:

B.R. Ambedkar: A Great Leader of the Dalits

“Man is mortal. Everyone has to die someday or the other. But one must resolve to lay down one's life in enriching the noble ideals of self-respect and in bettering one's human life... Nothing is more disgraceful for a brave man than to live a life devoid of self-respect.” – B.R. Ambedkar Issues of Equality in other Democracies

In many democratic countries around the world, the issue of equality continues to be the key issue around which communities struggle.

Inequality in the United States of America

Try yourself:Civil Rights movement of USA was about:
Explanation

Contribution of Rosa Parks in changing the Course of American History

Q.1. What are the key elements of democracy?

Q.2. Who is allowed to vote in India?

In a democratic country, like India, all adults aged 18 years or above irrespective of their religion, education, caste, rich or poor are allowed to vote.

Q.3. What is universal adult franchise? What is the basis of it?

Q.4. What is the position of equality in India, a democratic country?