The document Chapter Notes: Chapter 2 - On the Trail of the Earliest People, Class 6, SST (History) | EduRev Notes is a part of the Class 6 Course Social Studies (SST) Class 6.
All you need of Class 6 at this link: Class 6

Chapter Notes - History On the Trail of the Earliest People Depiction of Hunter-gatherers in ancient times

Why did the Earliest people lead a Nomadic life:

(i)If they stayed at one place, resources like plants and animals would finish.

(ii)Plants bear different fruits in different seasons. So, man too had to move in search of these, as per seasons.

(iii) People had to move wherever water was available.

How do we know about Early People:

(i)Archaeologists have found out several tools used by hunter gatherers.

(ii)Tools were made of stone, wood, etc.

(iv)Wood was used to make huts and firewood.

Where did Early Man Live?

(ii)They lived in places where stones were found and people made tools. 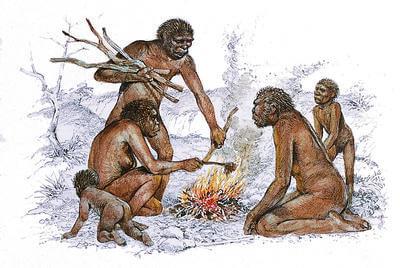 (iv)The factory sites were found near discarded blocks of stone.

(i)The period when mostly stone tools were made is known as stone age.

(ii)It is divided into three parts:

Stone tools were made using two techniques: stone on stone and pressure flaking.

(i)Accidentally one of the biggest discoveries made by man was fire.

(iii)It was used in winters to keep warm and use it in the art of cooking food.

i)Man early caves had paintings on the walls.

ii)These were found in M.P. and Southern U.P.

iii)Early man’s painted and what they felt in these paintings. (i)Paleolithic sites have been found in the Deccan.

Kurnool in Andhra Pradesh and Hungsi in Karnataka:

(i)Rivers like Godavari, Krishna and Tapti drained the region.

(ii)Large number of Paleolithic tools made from stone have been found along the river.

(iii)Archaeologists are studying these tools carefully to understand the life of early man.

(iv)Bones, horns and tusks of animals like elephant and wild ox have been found.