The document Chapter Notes - Chapter 3: Our Changing Earth, SST, Class 7 | EduRev Notes is a part of the Class 7 Course Social Studies (SST) Class 7.
All you need of Class 7 at this link: Class 7

(i)The landscapes are continuously worn away by two forces, weathering and erosion.

(ii)Weathering is the breaking down of the rocks on the earht’s surface.

(iii)Erosion is the wearing away of the landscape by different agents like water, wind and ice. Fig: Work of a River

i)When the river tumbles at a steep angle over hard rocks or down a steep valley side, it forms a waterfall.

ii) As the river enters the plain, it twists and turns, forming large bends known as meanders.

iii) At this point of time, the meander loop cuts off from the river and forms a cut-off called an ox-bow lake.

iv) During flooding, the river deposits layer of fine soil and other materials called sediments along its banks. This leads to the formation of a flat fertile plain called floodplain.

(v) The raised banks along the river are called levees.

(vi) The collection of sediments from all the mouths forms a delta. ii)Due to sea waves, hollow-like caves and formed on the rocks. They are called sea caves.

(iii )As cavities become bigger in size, only the roof of the caves remain, thus forming sea arches.

iv) The erosion further breaks the roof and only walls are left. It is called stacks. 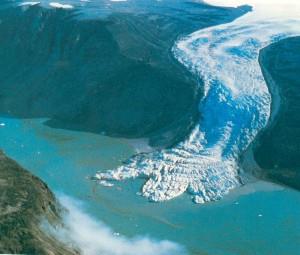 i) Glaciers are rivers of ice which erode the landscape by buildozing soil and stones to expose the solid rocks below.

ii) The material carried by the glaciers, such as big and small rocks, sand and silt gets deposited. These deposits form glacial moraines. i) An active agent of erosion and deposition in the deserts is wind. It makes rocks in shape of a mushroom, called mushroom rocks.

ii) When the wind stops blowing, the sand falls and get deposited in low hill like structures. These are called sand dunes.

iii) When the grains of sand are very fine and light, the wind can carry it over long distances. When such sand is deposited in large areas, it is called loess.