The document Chapter Notes - Sound, Science, Class 8 | EduRev Notes is a part of the Class 8 Course Science Class 8.
All you need of Class 8 at this link: Class 8

Sound is very important for our life. It is the sound that helps us to communicate with each other. Production of sound:Sound is produced because of vibration of an object. In other words, a vibrating object produces sound.Example: Sound needs a medium to propagate:The traveling of sound is called propagation of sound. Sound cannot propagate in the absence of a medium. The place where there is no air or air is removed, is called vacuum. Sound does not propagate (travels) through vacuum. Sound travels through solid, liquid and gas.We usually hear sound which comes to us through air. 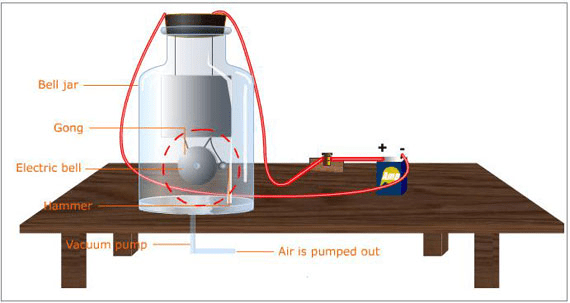 Amplitude, Time Period and Frequency of a Sound:Sound travels in the form of wave. When a pebble is dropped in pond water, it produces ripples in water. The ripple is called wave. Sound travels producing similar waves.Amplitude and frequency are two important characters of sound. Sounds produced by different object are differentiated by amplitude and frequency of sound.

Fig: Every wave can have a different amplitude or frequency

Amplitude: The distance from normal to peak is called amplitude. Since, sound travels in the form of wave, so sound has amplitude.

Frequency: The number of vibrations or oscillations per second is called frequency.

Frequency is expressed in hertz.If an object oscillates or vibrates 40 times in 1 second, then its frequency will be equal to 40 hertz.Time period: Time required to produce one complete oscillation is called time period. Examples:Children and women produce sound of high frequency and their sound is shriller and of higher pitch. On the other hand, an adult male produces sound of lower frequency and his sound is less shrill and has lower pitch.

A lion produces a sound of lower frequency which is less shrill and has lower pitch, while a bird produces sound of high frequency which is shriller and has higher pitch. However, sound of lion is louder than the sound of a bird.Audible and Inaudible Sound:Sounds with frequency between 20 Hz to 20,000 Hz are called audible sound. The hearing range of human beings is between 20 hertz to 20,000 hertz.Sound with frequency below 20 hertz and above 20,000 hertz is called sound of inaudible range. Humans cannot hear the sound of inaudible range.

Many animals, such as dogs, cats, etc. can hear the sound with frequency above 20,000 hertz.

Noise and Music:Sound that appears unpleasant to us is called noise, such as sound of horn, sound near the site of construction work, sound of aeroplane, etc.

Sound that appears pleasant to our ear is called musical sound, such as sound of musical instrument, song of a good singer, etc. Fig: Difference Between Noise and Music Problems due to Noise Pollution:Noise pollution can create many types of health related problems, such as lack of sleep (insomnia), hypertension, loss of hearing, anxiety, etc. Sound above 80 dB is very painful to hear.

A person who is exposed to loud sound continuously may get permanent or temporary loss of hearing (impairment of hearing).