The First World War began in 1914 and lasted until 1918. In this war, there was mass destruction of life and property, which led to a worldwide desire of peace. This desire led to the creation of the League of Nations. The league was established in 1919. The President of the United States of America, Woodrow Wilson, played a key role in the formation of the League of Nations. It had 63 member countries. Its main aim was to protect the world from entering into another war. However, the league failed as the Second World War which broke out in 1939 and lasted until 1945.

Almost all the countries of the world were affected by these wars. The Second World War was more destructive than the first one. It brought untold misery and destruction. Many cities and towns were destroyed and millions of people were killed and injured. People of the world were shocked. They realised that future wars could destroy humanity, the atom bombs had already been used. Permanent peace would bring prosperity for the entire human race. It was this thought which gave birth to the United Nations Organization.

FORMATION OF THE UNITED NATIONS ORGANISATION

The United Nations has its own flag. It is light blue in colour with a white UN emblem on it.

OBJECTIVES OF THE UNITED NATIONS

The main objective of the United Nations is to promote and maintain international peace and security of every country. Other aims include:

ACHIEVEMENTS OF THE UNITED NATIONS

At present 193 countries are members of the United Nations. The United Nations has been largely successful in maintaining peace in the world. It has solved several international disputes. It has prevented conflicts from growing into major wars. The United Nations also undertook peace-keeping operations in Congo (Zaire) and west Asia. The UN favours disarmament. It makes effort to prevent the misuse of destructive weapons like chemical weapons, atomic weapons, etc. The world is now a better place to live in largely due to the efforts of the UN.

MAJOR BODIES/ORGANS OF THE UNO

The General Assembly is the main body of the UNO where the representatives of all member countries sit and discuss matters. It is like the parliament of the UNO. The Assembly has the power to admit new members to the UNO. The General Assembly has the right to discuss and make recommendations on any issue covered in the UN’s charter. It elects members of other UN bodies and has the power to admit new members to the UN. The General Assembly makes the budget of the UNO. It also reviews the reports of other organs of the UN and appoints nonpermanent members of the Security Council. It also discusses issues affecting world peace.

The Security Council is the most powerful organ of the UNO. It has total 15 members, out of which, five are permanent members. The United States of America, Russia, France, United Kingdom and China are the five permanent members and they have the Veto power. The rest of the ten non-permanent members are elected for a two year term by the General Assembly from among its members. The Security Council held its first session in 1946. It is responsible for the maintenance and restoration of international peace and security. Wherever there is conflict in the world, the Security Council tries to resolve it and whenever needed, it sends its peace-keeping forces to restore peace.

The Economic and Social Council coordinates economic and social work of the UN. ECOSOC studies and recommends actions on issues, such as human rights, equality of women, education and medical facilities.

There are 54 member countries in ECOSOC. They are elected by the General Assembly for a three-year term. It functions through its various committees and commissions.

The Trusteeship Council was established in 1945. It was established to look after the transition of colonies of independent countries. At that time, there were eleven such regions/areas which have now become independent. This organ is no longer in function.

The International Court of Justice (ICJ)

The International Court of Justice, also known as the World Court, is the legal court of the UNO. It has 15 judges. The Security Council and the General Assembly elect all judges for a period of 9 years. Its headquarters is at Hague, the Netherlands. The ICJ advises the member countries on matters of international law. This court hears disputes among member nations of the UNO. 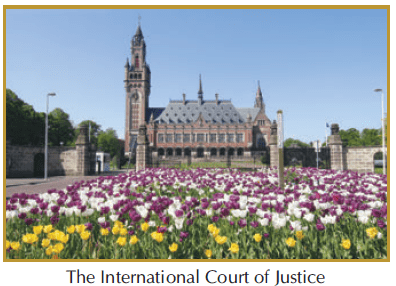 Dr. Nagendra Singh of India was the president of the International Court of Justice from 1985 to 1988.

SPECIAL AGENCIES OF THE UN

UN has set up various agencies to promote its work, such as:

Its headquarters is in New York. It works for the welfare of children. 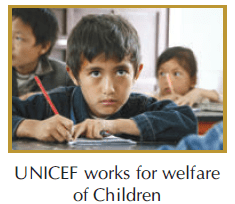 WHO was established in 1948. Its headquarters is in Geneva, Switzerland. It works towards improving the health of people and finding ways to combat diseases. 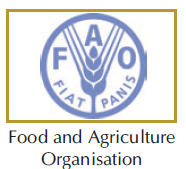 Its headquarters is in Rome, Italy. This organisation helps in eradicating extreme poverty and hunger. Its main aim is ‘Freedom from Hunger’. The motto of FAO is, ‘Let there be bread’.

It helps the nations in improving working conditions of the people. It tries to sort out problems between governments, employers and workers of a nation.

UNESCO was established in 1946. Its headquarters is 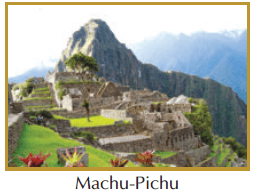 in Paris, France. Its aim is to help people in the field of

education. It also helps in preserving old monuments, art, culture and architecture. It encourages nations to work together in the fields of education, science and culture.

The World Bank is an international financial institution 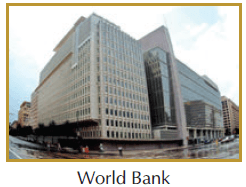 that provides loans to developing countries for capital buildings. The World Bank’s main goal is the reduction of poverty in the world. The World Bank was created at the Bretton Woods Conference in 1944. Its headquarters is situated in Washington DC

The International Atomic Energy Agency is an international organisation which works to promote the peaceful use of nuclear energy. The IAEA was established as an autonomous organisation on July 29, 1957. Its headquarters is situated in Vienna, Austria.

It was set up in 1945. Its headquarters is situated at Washington DC. It provides loans and financial assistance to the nations to overcome their economic problems.

Representatives: a person chosen or appointed to act or speak for another.

Budget: an estimate of income and expenditure for a set period of time.

Restore: the state of being restored in its former good condition.