The document Chapter Notes - Tissues Class 9 Notes | EduRev is a part of the Class 9 Course Science Class 9.
All you need of Class 9 at this link: Class 9

Meristematic tissues can be classified on the basis of their position into:(i) Apical Meristem (root and shoot apex) occurs at the growing tips of stems and roots and increases the length of the stem and the root. 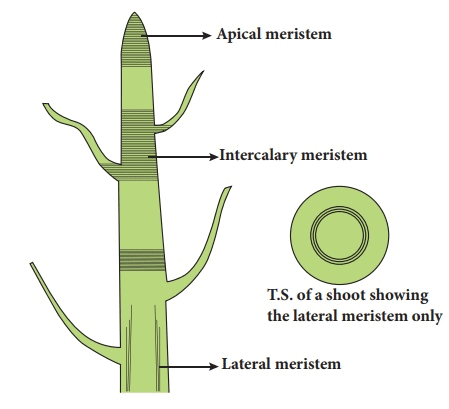 Longitudinal section of shoot apex showing location of meristem and young leaves(ii) Lateral Meristem (cambium, cork cambium) occurs on the sides both in stem and root. It is exclusively present in dicot plants where it increases the girth of stem and root.It is of two main types - Vascular and Cork cambium.(iii) Intercalary Meristem (internodes) is present at the base of leaves and internodes. It increases the length between the two nodes. It is usually found in monocot plants.

Try yourself:Cardiac muscleis one of the three major types of muscles, the others being skeletal and smooth muscles. It is found in the walls and histological foundation of the heart. Which one of the following statements is not related to the cardiac muscles?
View Solution

1. Simple Permanent TissuesA simple tissue is a group of one type of cells which perform the same function.Simple tissue is classified into three main types:

Transpiration is the process of loss of excess water in the form of vapours through stomata.

Try yourself:While doing work and running, you move your organs like hands, legs, etc. Which among the following is correct?
View Solution

2. Complex Permanent TissuesComplex permanent tissues are made up of more than one type of cells. All these cells coordinate to perform a common function.Complex tissue is classified into two main types:(a) Xylem

Animal tissues are of four different types depending upon their structure and function.