μ= measure of allowable deviation in the pass band. 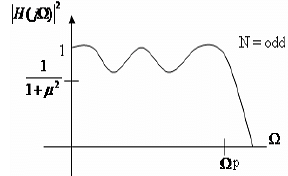 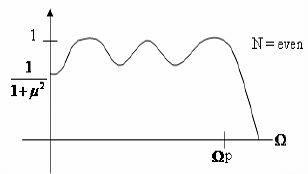 Two features of Chebyshev poly are important for the filter design

Transfer function lies in the range

for  0 ≤ Ω ≤Ωp Whereas the frequency value important for the design of the Butterworth filter was the Ωc the relevant frequency for the Chebyshev filter is the edge of pass band Ωp.

2. |X| >>1|CN,l Increases as the Nth power of x. this indicates that for Ω>>Ωp, the magnitude response decreases as Ω-N, or -6N dB Octane. This is identical to Butterworth filter.

Now the ellipse is defined by major & minor axis. 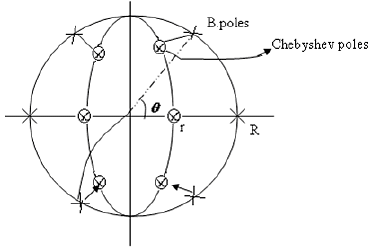 Value of μ is determined from the pass band

Value of N is determined from stop band inequality

Since this last inequality is easily satisfied with N=4 the value of μ can be reduced to as small as 0.11, to decrease pass band ripple while satisfying the stop band. The value  μ =0.4 provides a margin in both the pass band and stop band. We proceed with the design with μ =0.508 to show the 1dB ripple in the pass band.