The document Chemistry: CBSE Sample Question Paper (2020-21) - 2 Notes | EduRev is a part of the Class 12 Course Sample Papers for Class 12 Medical and Non-Medical.
All you need of Class 12 at this link: Class 12

Objective Type1. Read the passage given below and answer the following questions:Q.1. The two monosaccharides are joined together by an oxide linkage formed by the loss of a water molecule. Such a linkage between two monosaccharide units through oxygen atom is called glycosidic linkage. In disaccharides, if the reducing groups of monosaccharides i.e., aldehydic or ketonic groups are bonded, these are non-reducing sugars, e.g., sucrose. On the other hand, sugars in which these functional groups are free, are called reducing sugars, for example, maltose and lactose.A non reducing disaccharide ‘A’ on hydrolysis with dilute acid gives an equimolar mixture of D–(+)– glucose and D-(-)-Fructose.

ORProteins are found to have two different types of secondary structures, viz. a-helix and b-pleated sheet structure. a-helix structure of protein is stabilised by(a) Peptide bonds(b) van der Waals forces(c) H ydrogen bonds(d) Dipole-dipole interactionsAns. cSolution. a-helix structure of protein is stabilised by hydrogen bonds. A polypeptide chain forms all possible hydrogen bonds by twisting into right-handed helix with the –NH group of each amino acid residue hydrogen bonded to >C=O of an adjacent turn of helix.Q.2. Read the passage  given bellow and answer the following questions (1 x 4 = 4)Scuba apparatus includes a tank of compressed air toted by the diver on his or her back, a hose for carrying air to a mouthpiece, a facemask that covers the eyes and nose, regulators that control air flow, and gauges that indicate depth and how much air remains in the tank. A diver who stays down too long, swims too deep, or comes up too fast can end up with a condition called “the bends.” In this case, bubbles of gas in the blood can cause intense pain, even death. In these following questions (Q. No. 12 - 16), a statement of assertion followed by a statement of reason is given. Choose the correct answer out of the following choices.(a) Assertion and reason both are correct statements and reason is correct explanation for assertion.(b) Assertion and reason both are correct statements but reason is not correct explanation for assertion.(c) Assertion is correct statement but reason is wrong statement.(d) Assertion is wrong statement but reason is correct statement.(i) Assertion : Scuba divers may face a medical condition called ‘bends’.Reason : ‘Bends’ can be explained with the help of Henry’s law as it links the partial pressure of gas to that of its mole fraction.Ans. aSolution. Henry’s law explains some biological phenomena like the ‘bends’ experienced by the scuba divers. Since mole fraction of a gas in the solution is a measure of its solubility.

(ii) Assertion : Bends is caused due to formation of nitrogen bubbles in the blood of scuba divers which blocks the capillaries.Reason : Underwater high pressure increases solubility of gases in blood, while as pressure gradually decreases moving towards the surface, gases are released and nitrogen bubbles are formed in blood.Ans. aSolution. Scuba divers must cope with high concentrations of dissolved gases while breathing air at high pressure underwater. Increased pressure increases the solubility of atmospheric gases in blood. When the divers come towards surface, the pressure gradually decreases. This releases the dissolved gases and leads to the formation of bubbles of nitrogen in the blood. This blocks capillaries and creates a medical condition known as bends. 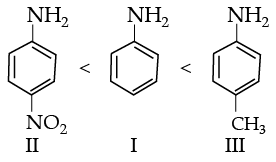 Q.6.The IUPAC name of the compound shown below is: 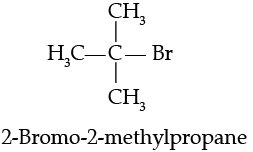 Q.10. Which of the following pairs represents anomers?(a) 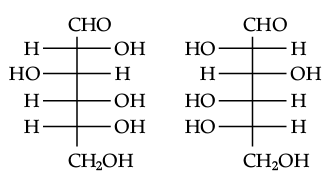 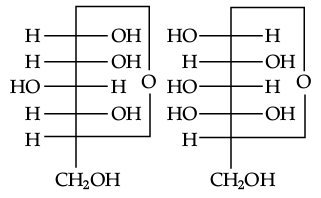 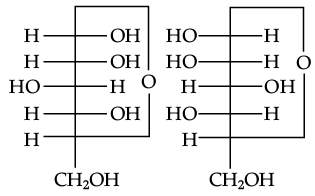 Ans. cSolution. The isomers, which differ only in the configuration of the hydroxyl group at C-1, are called anomers and are referred to as a and β-forms.Q.11. Which of the following is not tetrahedral in shape?(a)

Ans. cIn the following questions (Q. No. 12 - 16) a statement of assertion followed by a statement of reason is given. Choose the correct answer out of the following choices.(A) Assertion and reason both are correct statements and reason is correct explanation for assertion.(B) Assertion and reason both are correct statements but reason is not correct explanation for assertion.(C) Assertion is correct statement but reason is wrong statement.(D) Assertion is wrong statement but reason is correct statement.Q.12. Assertion (A) : When NaCl is added to water a depression in freezing point is observed.Reason (R) : The lowering of vapour pressure of a solution causes depression in the freezing point.Ans. aSolution. When a non-volatile solute is added to water, freezing point lowers due to lowering of vapour pressure.Q.13. Assertion (A) : Cu2+ iodide is not known.Reason (R) : Cu2+ oxidises I– to iodine.Ans. aSolution. Cu2+ oxidises iodide to iodine hence cupric iodide is converted to cuprous iodide.Q.14. Assertion (A) : Nickel can be purified by Mond's process.Reason (R) : Ni(CO)4 is a volatile compound which decomposes at 460 K to give pure Ni.Ans. aSolution. When nickel (Ni) is treated with carbon monoxide it forms nickel tetracarbonyl Ni(CO)4, while impurities are left behind. When the vapour of Ni(CO)4 is heated at 460 K, it is decomposed to give pure nickel while carbon monoxide is removed as gas.Q.15. Assertion (A) : Colloidal solutions do not show Brownian motion.Reason (R) : Brownian motion is responsible for stability of sols.Ans. dSolution. Colloidal particles show Brownian movement and it is responsible for the stability of colloidal solution.Q.16. Assertion (A) : Colloids are stable.Reason (R) : Brownian movement has a stirring effect, which does not allow the particles to settle.Ans. aSolution. Colloids are stable due to Brownian movement which is the movement of colloidal particles striking against the dispersion medium. It prevents them from settling down.

Ans. Intermolecular forces of attraction between carbon disulphide and acetone are weaker than the pure components.Minimum boiling azeotrope at a specific composition.Q.19. Account for the following:(i) The two oxygen-oxygen bond lengths in ozone molecule are identical.(ii) Most of the reactions of fluorine are exothermic.Ans. (i) Due to resonance the two O-O bond lengths are identical.(ii) Due to strong bond formed by it with other elements.

‘a’ carbon of glucose and ‘b’ carbon of fructose are the anomeric carbon atoms in the monosaccharide units. The isomers which differ only in the configuration of the hydroxyl group at C-1 are called anomers and are referred to as α- and β-forms.

Define the following terms:(i) Glycosidic linkage(ii) Invert sugarAns.(i) Glycosidic linkage: The two monosaccharides units are joined together through an oxide linkage formed by loss of a molecule of H2O.(ii) Invert sugar: Hydrolysis of sucrose brings about a change in sign of rotation from dextro (+) to laevo (–) and the product is known as invert sugar.Q.22. (i) Why phenol is more acidic than ethanol?(ii)Write the mechanism of acid dehydration of ethanol to yield ether:

Ans. (i) Due to resonance, phenoxide ion is more stable than phenol whereas there is no resonance is alkoxide ion / explained with the help of resonating structures.(ii) Mechanism of acid dehydration of ethanol:

Step 2: Formation of carbocation: It is the slowest step and hence, the rate determining step of the reaction.

Step 3: Formation of ethene by elimination of a proton.

Ans. (i) C6H5COCH3<CH3COCH3<CH3CHO.(ii) CH3COOH<Cl – CH2 – COOH<F – CH2 – COOHQ.24. Give reasons: (i) C – Cl bond length in chlorobenzene is shorter than C – Cl bond length in CH3 – Cl.(ii) The dipole moment of chlorobenzene is lower than that of cyclohexyl chloride.Ans. (i) Hoffmann-bromamide degradation reaction: When an amide is treated with bromine in aqueous or ethanolic solution of sodium hydroxide, a primary amine with one carbon atom less than the original amide is produced. This degradation is known as Hoffmann bromamide degradation reaction.

(ii) Carbylamine reaction: It is used as a test for detection of primary amines. When aliphatic or aromatic primary amines are heated with chloroform and alcoholic potassium hydroxide, carbylamine or isocyanides having foul smell are formed. Secondary and tertiary amines do not respond to this test. 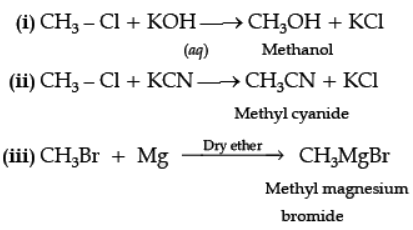 Q.No 26 -30 are Short Answer Type-II carrying 3 marks each.Q.26. Give reasons for the following:(i) (CH3)3 P = O exists but (CH3)3 N = O does not.(ii) Oxygen has less electron gain enthalpy with negative sign than sulphur.(iii) H3PO2 is a stronger reducing agent than H3PO3.Ans. (i) Because as N can't form 5 covalent bonds as its maximum covalency is three. The octet cannot be extended as it doesn't have d orbital, while P can extend its octet as it has empty d orbital.(ii) This is due to very small size of oxygen atom, repulsion between electrons is large in relatively small 2p sub-shell.(iii) In H3PO2 there are 2P – H bonds, whereas in H3PO3 there is 1 P-H bond.

OR(i) What happens when:(a) Chlorine gas reacts with cold and dilute solution of NaOH?(b) XeF2 undergoes hydrolysis?(ii) Assign suitable reason for the following:Out of noble gases only Xenon is known to form established chemical compounds.Ans. (i) F2 has lower bond dissociation energy than Cl2 because the size of F2 is much smaller than Cl2 as a result interelectronic repulsion works and make F2 weak.(ii) Helium is used in filling balloons for meteorological observations.(iii) XeF2 + PF5 ® [XeF]+ [PF6]–Q.27. What happens when:(i) CH3–Cl is treated with aqueous KOH ?(ii) CH3–Cl is treated with KCN ?(iii) CH3–Br is treated with Mg in the presence of dry ether?Ans. 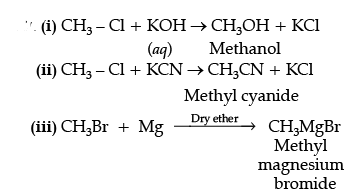 Q.No 31 to 33 are Long Answer Type carrying 5 marks each.Q.31. Write the hybridization and magnetic character of the following complexes:(i) [Fe(H2O)6]2+(ii) [Fe(CO)5]Ans. (i) sp3d2, Paramagnetic(ii) sp3d2, ParamagneticDetailed Answer:(i) In [Fe(H2O)6]2+the oxidation state of Fe is +2. The outermost electronic configuration of Fe is 3d64s24p0. H2O is weak field ligand and do not cause pairing up of electrons.

In this complex, there are 4 unpaired electrons. Therefore, it involves sp3d2  hybridisation and is paramagnetic.

(ii) In [Fe(CO)5] the oxidation state of Fe is zero. The outermost electronic configuration of Fe is 3d64s24p0. CO is strong field ligand, causes pairing up of 4s electrons into the 3d orbitals.

In this complex, there is no unpaired electron. Therefore, it involves dsp3 hybridisation and is diamagnetic.

ORWrite down the IUPAC name for each of the following complexes and indicate the oxidation state, electronic configuration and coordination number. Also give stereochemistry and magnetic moment of the complex:(a) K[Cr(H2O)2(C2O4)2].3H2O(b) [Co(NH3)5Cl]Cl2(c) [CrCl3(py)3](d) Cs[FeCl4](e) K4[Mn(CN)6]Ans. (a) 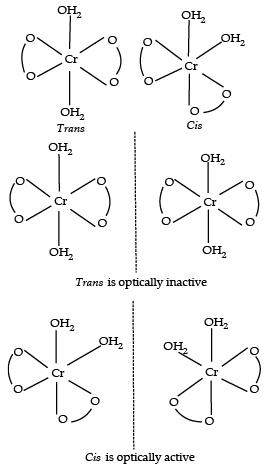 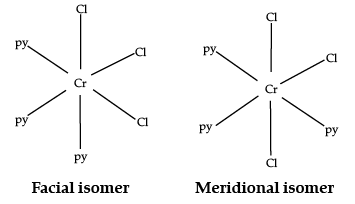 Both isomers are optically active. Therefore, a total of four isomers exist.

Ans. (i) The –OH group is an electron-donating group. Thus, it increases the electron density in the benzene ring as shown in the given resonance structure of phenol. 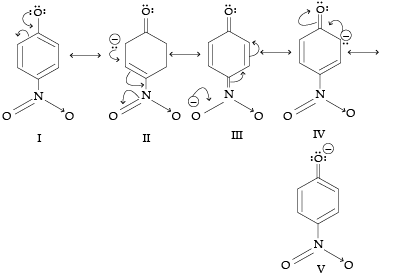 It can be observed that the presence of nitro groups increases the stability of ortho- and para-nitrophenoxide ions in comparison to phenoxide ions. Hence, ortho and para nitrophenols are more acidic than phenol.

(ii) Increasing order of acidity : o-cresol < phenol < o-nitrophenol.In cresol, the electron releasing group (–CH3) gives electrons and intensify the charge on phenoxide ion and therefore makes it unstable. Therefore, o-cresol is less acidic than phenol. In o-nitrophenol, the electron withdrawing (–NO2) group withdraws electrons and disperses the negative charge and stabilizes the phenoxide ion. Therefore, o-nitrophenol is more acidic than phenol.Q.33. Write the structure of A, B, C, D and E in the following reactions : 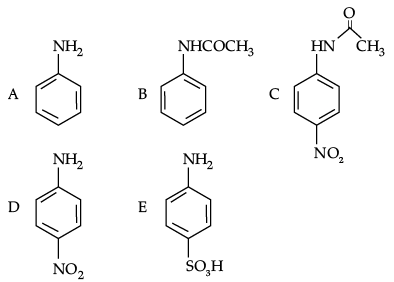 ORPredict the reagent or the product in the following reaction sequence: 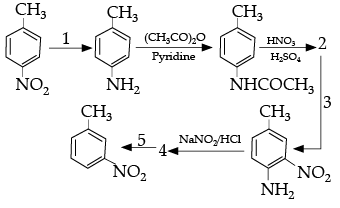 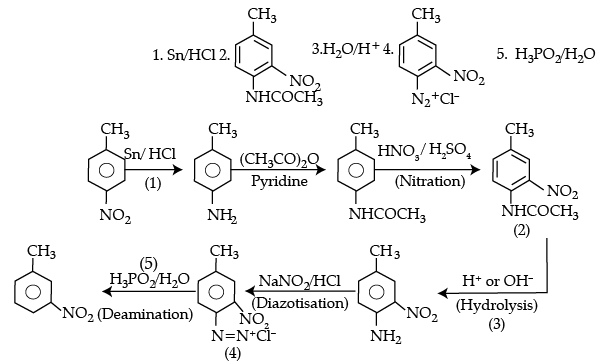