1. Read the passage given below and answer the following questions:Q1. All real structures are three dimensional structures. They can be obtained by stacking two dimensional layers one above the other. While placing the second square close-packed layer above the first we follow the same rule that was followed when one row was placed adjacent to the other. The second layer is placed over the first layer such that the spheres of the upper layer are exactly above those of the first layer. In this arrangement spheres of both the layers are perfectly aligned horizontally as well as vertically.

A metallic element crystallises into a lattice having a ABC ABC ... pattern and packing of spheres leaves out voids in the lattice.

The following questions are multiple choice questions. Choose the most appropriate answer:

Q.2. Read the passage given below and answer the following questions:In transition elements, generally, ions of the same charge in a given series show progressive decrease in radius with increasing atomic number. This is because the new electron enters a d orbital each time the nuclear charge increases by unity. But the radii of the third (5d) series are virtually the same as those of the corresponding members of the second series. This phenomenon is associated with the intervention of the 4f orbitals which must be filled before the 5d series of elements begin. The filling of 4f before 5d orbital results in a regular decrease in atomic radii called Lanthanoid contraction.

(ii) Assertion : Among the given ions, Mn3+ is the most strong oxidizing agent.Reason : Mn3+ has an unstable configuration.Ans. cSolution. Mn3+, due to stable d5 configuration in Mn2+

Whereas, carboxylic acid is more acidic than acetic acid due to formation of more stable conjugate base after removal of H+ as compared to phenol.

Chloroacetic acid is more acidic than acetic acid due to the presence of electron withdrawing chlorine group attached to a- carbon of carboxylic acid. 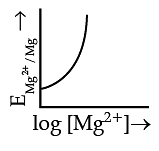 ORAccording to Arrhenius equation, rate constant k is equal to Ae–Ea/RT. Which of the following options represent the graph of ln k versus 1/T ?(a)

Ans. aSolution.These linkages are present between 5' and 3' of pentose sugars of nucleotides. 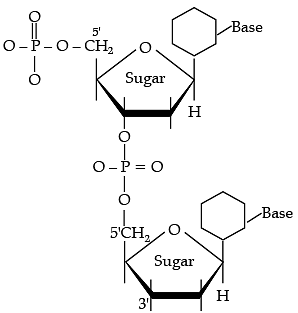 Q.5. A first order reaction is 50% completed in 1.26 × 1014 s. How much time would it take for 100% completion?(a) 1.26 × 1015 s(b) 2.52 × 1014 s(c) 2.52 × 1028 s(d) InfiniteAns. dSolution. The reaction will be 100% complete only after infinite time.Q.6. Generally, transition elements form coloured salts due to the presence of unpaired electrons. Which of the following compounds will be coloured in solid state ?(a) Ag2SO4(b) CuF2(c) ZnF2(d) Cu2Cl2Ans. bSolution. Cu2+ has 1 unpaired electron in CuF2 which is responsible for imparting colour in solid state.Q.7. Consider a first order gas phase decomposition reaction given below:A(g) → B(g) + C(g)The initial pressure of the system before decomposition of A was ‘pi’. After lapse of time ‘t’, total pressure of the system increased by x units and became ‘pt’. The rate constant k for the reaction is given as:(a)

Hence, the pressure of A decreased by x atom.

ORAssertion (A) : Λm for weak electrolytes shows a sharp increase when the electrolytic solution is diluted.Reason (R) : For weak electrolytes degree of dissociation increases with dilution of solution.Ans. aSolution. Weak electrolytes dissociate partially in concentrated solution. On dilution, their degree of dissociation increases hence, their Λm increases sharply.Q.13. Assertion (A) : D(+)– Glucose is dextrorotatory in nature.Reason (R) : ‘D’ represents its dextrorotatory nature.Ans. cSolution. 'D' corresponds to the position of –OH group on the right side on the farthest asymmetric C-atom.Q.14. Assertion (A) : Cu cannot liberate hydrogen from acids.Reason (R) : Because it has positive electrode potential.Ans. aSolution. Copper (Cu) does not liberate hydrogen from acids due to the presence of positive electrode potential.Q.15. Assertion (A) : N-Ethylbenzene sulphonamide is soluble in alkali.Reason (R) : Hydrogen attached to nitrogen in sulphonamide is strongly acidic.Ans. cSolution. In alkylation, an amine can react with alkyl halide to form next higher class of amine caused by the presence of electron pair on nitrogen which makes amine to behave as nucleophile and alkyl halide thus undergo nucleophilic substitution reaction. When primary and secondary amines react with acid chlorides, anhydrides and esters to give monosubstituted amides as products. Acylation is carried out in the presence of a base stronger than the amine like pyridine which causes the shift of the equilibrium to the right side.Q.16. Assertion (A) : Cu is less reactive than hydrogen.Reason (R) : EºCu2+/Cu is negative.Ans. cSolution. Cu is less reactive than hydrogen because EΘCu2+/cu  is positive.

The following questions, Q.No 17 – 25 are Short Answer Type-I and carry 2 marks each.Q.17. Account for the following:(i)  O2N – CH2 – COOH has lower pKa value than CH3COOH.(ii) (CH3)2CH – CHO undergoes aldol condensation whereas (CH3)3C – CHO does not.Ans. (i) Due to electron withdrawing nature of –NO2 group which increases the acidic strength and decreases the pKa value.(ii) (CH3)2CH-CHO has one a-H atom whereas α -H atom is absent in (CH3)3C-CHO. 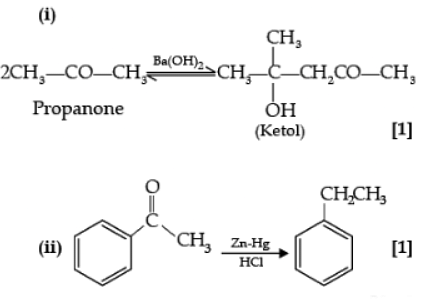 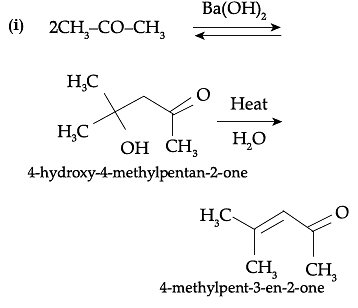 Q.19. (i) Glucose on reaction with acetic acid gives glucose penta acetate. What does it suggest about the structure of glucose ?(ii) Write difference between fibrous protein and globular protein. Give two points.Ans. (i) 5 OH groups are present.(ii) Fibrous proteins : parallel polypeptide chain, insoluble in water, Globular proteins : spherical shape, soluble in water, (or any 1 suitable difference)

Nucleotide : When nucleoside bonds with phosphate group(ii) a-helix has intramolecular hydrogen bonding while β-pleated has intermolecular hydrogen bonding / a-helix results due to regular coiling of polypeptide chains while in β-pleated all polypeptide chains are stretched and arranged side by side.Q.20. Give reasons for the following :(i) (CH3)3 P = O exists but (CH3)3 N = O does not.(ii) Oxygen has less electron gain enthalpy with negative sign than sulphur.Ans. (i) Because as N can't form 5 covalent bonds as its maximum covalency is three. The octet cannot be extended as it doesn't have d orbital, while P can extend its octet as it has empty d orbital.(ii) This is due to very small size of oxygen atom, repulsion between electrons is large in relatively small 2p sub-shell.Q.21. Calculate the emf of the following cell at 298 KCr(s)/Cr3+(0.1M)//Fe2+ (0.01M)/Fe(s)[Given : E°cell = + 0.30 V]Ans. 2Cr(s) + 3 Fe2+(aq.) → 3Fe(s) + 2Cr3+ (aq.)n = 6 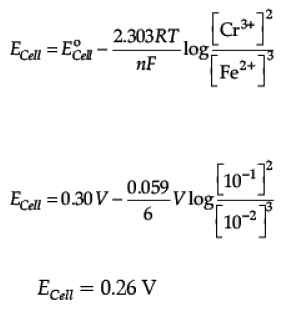 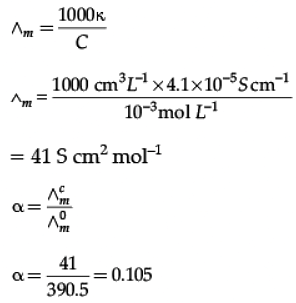 Q.22. Complete the following equations :(i) Ag + PCl5 ®(ii) CaF2 + H2SO4 ®Ans. (i) 2Ag + PCl5 ® 2AgCl + PCl3(ii) CaF2 + H2SO4 ® CaSO4(s) + 2HF (or H2F2)Q.23. A black compound of manganese reacts with a halogen acid to give greenish yellow gas. When excess of this gas reacts with NH3 an unstable tri-halide is formed. How does the oxidation state of nitrogen changes in this process ? Identify the greenish yellow gas.Ans. The oxidation state of the nitrogen changes from –3 to +3 in the given reaction. Greenish yellow gas is chlorine.

Detailed Answer:MnO2 is the black color compound of manganese which reacts with halogen acid like HCl, to form greenish yellow chlorine gas. Cl2 in turn reacts with NH3 to form NCl3 where the oxidation state of N in NH3 is changed from –3 to +3 in NCl3.MnO2 + 4HCl → MnCl2 + 2H2O + Cl2.

Detailed Answer:(i) The rate law for the reaction is :

ORUsing Raoult’s law explain how the total vapour pressure over the solution is related to mole fraction of components in the following solutions:(i) CHCl3(l) and CH2Cl2(l)(ii) NaCl(s) and H2O(l)Ans. (i)

Δp = (p0 - p) xB = mole fraction of solute.Q.27. (i) Solutions of two electrolytes ‘A’ and ‘B’ are diluted. The limiting molar conductivity of ‘B’ increases 1.5 times while that of ‘A’ increases 25 times. Which of the two is a strong electrolyte ? Justify your answer.(ii) The products of electrolysis of aqueous NaCl at the respective electrodes are :Cathode : H2Anode : Cl2 and not O2. Explain.Ans. (i) ‘B’ is a strong electrolyte.A strong electrolyte is already dissociated into ions, but on dilution interionic forces overcome, ions are free to move. So there is slight increase in molar conductivity on dilution.(ii) On anode, water should get oxidised in preference to Cl-, but due to overvoltage/ overpotential Cl- is oxidised in preference to water.Q.28. How will you convert the following :(i) Nitrobenzene into aniline,(ii) Ethanoic acid into methanamine,(iii) Aniline to N-phenylethanamide. (Write the chemical equations involved.)Ans. (i)

ORGive the structure of A, B and C in the following reactions : 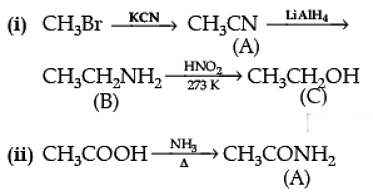 Q.29. The rate of a reaction depends upon the temperature and is quantitatively expressed as:(i) If a graph is plotted between log k and 1/T, write the expression for the slope of the reaction ?(ii) If at under different conditions, Ea1 and Ea2 are the activation energy of two reactions. If Ea1 = 40J/ mol and Ea2 = 80 J/mol. Which of the two has a larger value of the rate constant ?(iii) Write units of rate constants for zero order and second order reactions if the concentration is expressed in mol L-1 and time in seconds.Ans. (i) Slope = Ea/2.303R(ii) k1 > k2(iii) Zero order : mol L–1 s–1Second order : L mol–1 s–1

So, as the activation energy (Ea) increases, the value of rate constant (k) decreases.

Q.No 31 to 33 are Long Answer Type carrying 5 marks each.Q.31. Discuss briefly giving an example in each case the role of coordination compounds in :(a) Biological system.(b) Medicinal chemistry.(c) Analytical chemistry.(d) Extraction/metallurgy of metals.

OR(a) When a co-ordination compound CoCl3.6NH3 is mixed with AgNO3, 3 moles of AgCl are precipitated per mole of the compound. Write(i) Structural formula of the complex,(ii) IUPAC name of the complex. 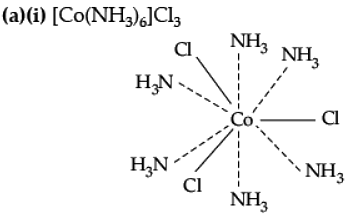 (iv) Write the IUPAC name of the following compound:

(v) Write the IUPAC name of the following compound :C6H5–CH2–CH2–OH

Q.33. (A), (B) and (C) are three non-cyclic functional isomers of a carbonyl compound with molecular formula C4H8O. Isomers (A) and (C) give positive Tollens’ test whereas isomer (B) does not give Tollens’ test but gives positive Iodoform test. Isomers (A) and (B) on reduction with Zn(Hg)/conc. HCl give the same product (D).(a) Write the structures of (A), (B), (C) and (D).(b) Out of (A), (B) and (C) isomers, which one is least reactive towards addition of HCN ?Ans. Isomer (B) 2-butanone is least reactive towards addition of HCN. Towards addition reaction, aldehydes are more reactive than ketones due to steric and electronic reasons.A nucleophile can approach more easily to aldehyde carbonyl carbon than that of ketone as in aldehydes, only one alkyl group is present and in ketones two bulky alkyl groups are present. Due to +I effect of alkyl groups, the carbonyl carbon in aldehydes is more electrophilic than that in ketones. In ketones +I effect of two alkyl groups reduces the electrophilicity of carbonyl carbon. In aldehyde, +I effect of only alkyl group reduces the electrophilicity of carbonyl carbon. 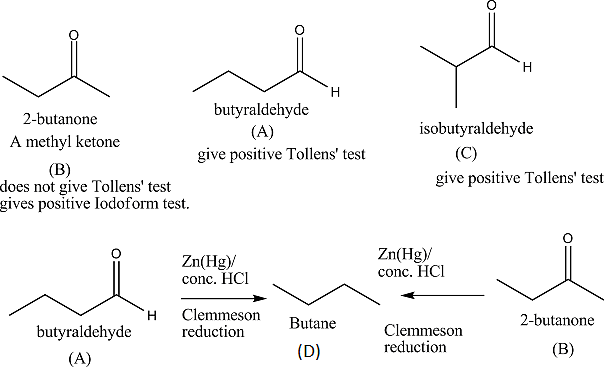 OR(i) Give reasons for the following :(a) Protonation of Phenols is difficult whereas ethanol easily undergoes protonation.(b) Boiling point of ethanol is higher than that of dimethyl ether.(c) Anisole on reaction with HI gives phenol and CH3– I as main products and not iodobenzene and CH3OH.

(ii) Write the mechanism of the following reaction :

Ans. (i) (a) In phenol, the lone pair of electrons on oxygen involves in delocalization which results in their non-availability for the protonation. Whereas in ethanol, the electrons on oxygen atom are not delocalised which results in their availability for protonation.(b) The variation can be established by intermolecular hydrogen bonding, where alcoholic hydrogen is bounded to a strongly electronegative oxygen atom to give rise to

dipole of the form, Et–Oδ- – Hδ+ which arises the boiling point.

Whereas, C-O bonds in dimethyl ether are polar. Carbon bonded with hydrogen is moderately electronegative compared to oxygen. In the absence of intermolecular hydrogen bonding, ether becomes more volatile.(c) Attack of I–ion on anisole is through SN2 mechanism, which attacks the lesser hindered CH3 group forming CH3I. Also, C-O bond in ether is difficult to break due to resonance.