The document Circle, JEE Main Notes JEE Notes | EduRev is a part of the JEE Course JEE Revision Notes.
All you need of JEE at this link: JEE

Equal chords of a circle subtend equal angles at the center 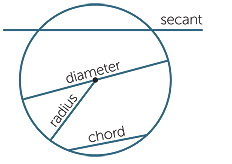 The below table describes the equations of circle according to changes in radii and centers:

How to calculate direct common tangents:

The equations of family of circles in various cases: