In this article, We are providing the 2nd part of the study notes on Circuits Analysis and Applications of Diodes, BJT, and MOSFET for GATE and other Electrical Engineering exams. The study notes cover the topic such as Analysis of the operating mode of BJT, Operating Point, DC and AC load line, Instability in collector current and BJT Biasing.

➤ ANALYSIS OF OPERATING MODE OF BJTMethod-1To determine the mode of operation of a BJT, the following steps are followed.

Method-2The mode of operation of the Transistor is found by follwing the given steps.

Method-3 To determine the mode of operation of a BJT, the following steps are followed. 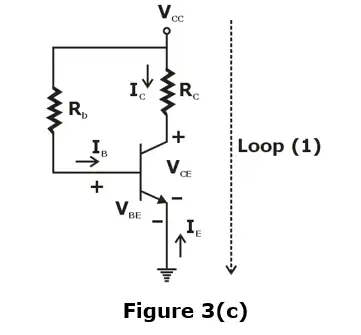 ➤ INSTABILITY IN COLLECTOR CURRENTFrom the above discussion, it is found that to obtain faithful reproduction of the input signal it should necessary to maintain a stable Q-point.The collection current can be calculated by the following equation.Ic = β IB + (1+β) Ico …………(ii)From equation (ii), It can be concluded that Ic is unstable due to the following reasons:

Procedure to find stability factorStep 1: Find expression for IB by applying KVL in a proper loop in the given circuit.Step 2: Find ∂IB/∂IC by differentiating of IB with respect to IC.Step 3: Substitute ∂IB/∂IC in S =