Q.1. Is the acceleration of a particle in uniform circular motion constant or variable?Ans. Variable

In uniform circular motion the magnitude of acceleration

does not changewhile its direction (being always towards the centre of the circular path) changes.

Q.2. Is it necessary to express all angles in radian while using the equation ω = ω0 + αt?Ans. No

Q.5. A particle is moving with a constant speed in a circular path. Find the ratio of average velocity to its instantaneous velocity when the particle describes an angle 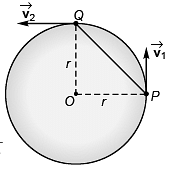 Q.6. A particle is moving with a constant angular acceleration of 4 rad/s2 in a circular path. At time t =0, particle was at rest. Find the time at which the magnitudes of centripetal acceleration and tangential acceleration are equal.Ans: 1/2 s

Q.1. Is a body in uniform circular motion in equilibrium?

Q.2. Find the maximum speed at which a truck can safely travel without toppling over, on a curve of radius 250 m. The height of the centre of gravity of the truck above the ground is 1.5 m and the distance between the wheels is 1.5 m, the truck being horizontal. 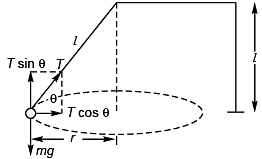 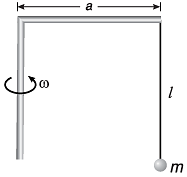 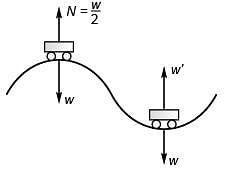 = 24 kN(b) At crest on increasing the speed (v), the value of N will decrease and for maximum value of v the of N will be just zero.Thus,

Q.5. A car driver going at speed v suddenly finds a wide wall at a distance r. Should he apply brakes or turn the car in a circle of radius r to avoid hitting the wall.Ans. Case I. If the driver turns the vehicle

[where v1 = maximum speed of vehicle]⇒

Case II. If the driver tries to stop the vehicle by applying breaks.Maximum retardation = μg

As v2 > v1, driver should apply breaks to stop the vehicle rather than taking turn.

Q.6. Show that the angle made by the string with the vertical in a conical pendulum is given by cos θ =

where L is the length of the string and ω is the angular speed.Ans. In the answer to question 3(a) if we replace θ  by Φ 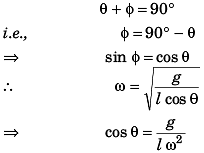