Q.1.  Which one of the following combination of colours was there in the ‘Swaraj flag’ designed by Gandhiji in 1921?    (1 Mark)(a) Red, Green and White(b) Red, Green and Yellow(c) Orange, White and Green(d) Yellow, White and Green Ans: (a)Q.2. Why were manuscripts not widely used in India before the age of print?ORWhen did printing press come to India and where?    (1 Mark)Ans: Manuscripts were highly expensive and fragile. They had to be handled carefully.ORThe printing press first came to Goa with Portuguese missionaries in the midsixteenth century.Q.3. Which of the following event was related to this image of "Gandhiji'?    (1 Mark) 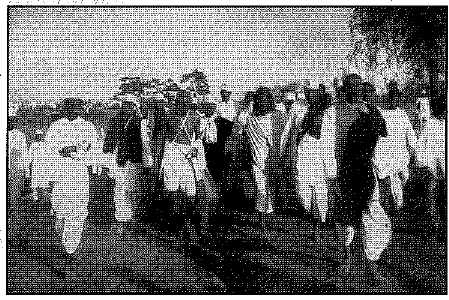 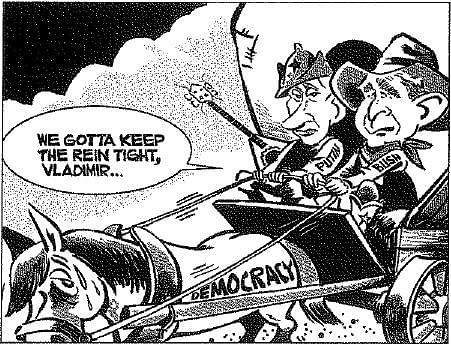 (a) Concentration of power in few hands.(b) Democracy is like a horse-cart.(c) Putin and Bush are good friends.(d) None of the aboveAns:  (a) Concentration of power in a few hands.Q.12. For comparison between countries, total income is not such a useful measure. Since, countries have different populations, comparing total income will not tell us what an average person is likely to earn. Are people in one country better off than others in a different country? Hence, we compare the average income which is the total income of the country divided by its total population.Analyse the above information and tell what is the other name of the 'Average Income' of a country?    (1 Mark)(a) Net Income(b) Total Income(c) Per Capita Income(d) Gross IncomeAns: (c) Per Capita IncomeQ.13.  State any two limitations of democracy.    (1 Mark)Ans: (a) It always worries about majorities and public opinions.(b) It delays its decisions.Q.14. Which of the following is not a right of a consumer?    (1 Mark)(a) Right to seek redressal(b) Right to be informed(c) Right to choose(d) Right to return the goodsAns: (d) Right to return the goods.Q.15. Which of the following neighbouring countries has better performance in terms of human development than India?    (1 Mark)(a) Bangladesh(b) Sri Lanka(c) Nepal(d) PakistanAns: (b) Sri LankaQ.16. Find the incorrect option.    (1 Mark)(a) Sri Lanka has been a centre of Buddhist religion and culture from ancient times.(b) Sri Lanka is not a multi-religious and multi-ethnic nation.(c) The major social groups in Sri Lanka are Sinhala speakers and Tamil speakers.(d) Among Tamils, there are two sub-groups i.e. Sri Lankan Tamils and Indian Tamils.Ans: (b) Sri Lanka is not a multi-religious and multi-ethnic option.Q.17. All the basic services like transport, banks insurance belong to which of the following sectors?    (1 Mark)(а) Primary Sector (b) Secondary Sector (c) Tertiary Sector (d) IT SectorAns: (c)Q.18. Banks charge a higher interest rate on loans than what they offer on______.    (1 Mark)Ans: depositsQ.19. In the question given below, there are two statements marked as Assertion (A) and Reason (R). Read the statements and choose the correct option :Assertion (A): Banks give loans not only to profit - making businesses but also to small cultivators.Reason (R): The RBI supervises the functioning of formal sources of loans.Options:    (1 Mark)(a) Both (A) and R) are true and (R) is the correct explanation of (A).(b) Both (A) and (R) are true but (R) is not the correct explanation of (A).(c) (A) is correct but (R) is wrong.(d) (A) is wrong but (R) is correct.Ans: (a) Both (A) and (R) are true and (R) is explanation of (A).Q.20. The other name of slash and burn agriculture is _______.    (1 Mark)Ans: Jhumming.

Q.35. Three features (a), (b) and (c) are marked on the given political outline map of India. Identify these features with the help of the following information and write their correct names on the lines marked near them:(a) The place where the Indian National Congress session was held.    (2 Mark)(b) The place from where the movement of Indigo planters was started.    (2 Mark)(c) Place where Jallianwala Bagh incident occurred.    (2 Mark) 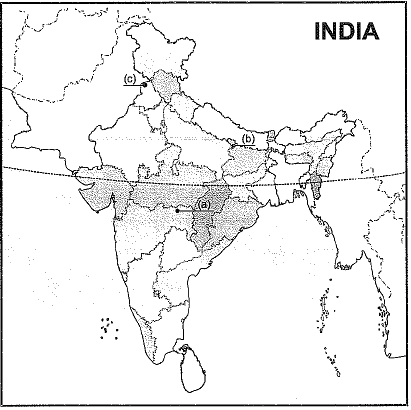