Ques 1: Write any two features of rectangular rural settlement pattern in the world.Ans: The features of rectangular rural settlements pattern are:(i) Roads cut each other at right angles.(ii) They are found in plains and valleys.Ques 2: Which state of India has the highest percentage of population below poverty line?Ans: Odisha (Orissa) is the state of India which has highest percentage of population below poverty line.Ques 3: Which type of roads provides maximum links in India?Ans: Rural roads and districts roads provide maximum links in India.Ques 4: Explain any three points of distinction between 'Hamleted rural settlements' and 'Dispersed rural settlements of India'.Ans:

Ques 5: Describe any five features of planation agriculture practised in different regions of the world.Ans: Main features of plantation agriculture practiced in different regions in the world:(i) Plantation agriculture was introduced in the tropical lands by Europeans and North Americans primarily in the colonies ruled by them.(ii) Plantation crops are coffee, tea, banana, sugarcane, pine apples etc.(iii) Estate for plantation are of very large size, sometimes running into the thousands of hectares.(iv) It requires large capital investments, managerial and technical support and scientific method of cultivation.(v) The labour are supplied by local peole at cheaper rates while technical and skilled assistance comes from tem-perate lands.(vi) Cheap transport is required to link the estates with factories and markets for export of products.Ques 6: Explain any five factors responsible for the development of 'Gujarat Industrial Region'.Ans: Gujarat Industrial Region: The nucleus of this region lies between Ahmedabad-Vadodara as a result is also known as Ahmedabad-Vadodara Industrial region. The main features of growth of this region are:(i) This region extends up to Valsad and Surat in the South and Jamnagar in the West.(ii) This region is associated with cotton growing tracts with location of textile industries.(iii) With discovery of oil and gas in Gulf of Khambat area led to the establishment of various oil refineries and petrochemicals around Ankleshwar, Vadodara and Jam Nagar.(iv) Kandla port provides the basic infrastructure for import and exports.(v) Developent of other heavy and basic chemicals, dyes, pesticides, engineering machinery, textile machinery, pharmaceuticals and dairy products have developed in this region.(vi) Surat has best diamond cutting and processing units in the world.(vii) Due to better roads and highways, transport facilities are available aplenty.Ques 7: What is age structure? Interpret with example the triangular shaped age-sex pyramid.Ans: Age structure is the number of people of different age group.(i) Generally the population is categorised into three broad age groups:(a) children,(b) adults and(c) aged. 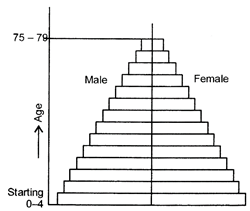 (ii) Most countries of Africa, Asia and Latin America have high birth rate and they have large size population in the lower age group. Countries having low birth rate and high life expectancy have more people in old age groups.(iii) If we draw a triangular shaped pyramid having wide base and taper top this is a typical diagram to show age and sex structure of populations. The base and apex-represent younger and oldest age groups respectively.(iv) This triangular pyramid is typical of less developed countries like Nigeria m Africa., Bangladesh, in Asia and Mexico in South -America.(v) Wide base means high birth rates.(vi) Tapered top indicates high death rates.