COLLIGATIVE PROPERTIESThese are the properties of solutions which depend upon the relative number of solute particles (molecules or ions) but not upon their nature.These are

These arise due to the presence of a non - volatile solute.

Key concept: In dilute solutions these properties depend only on the number of solute particles present and not on their identity. For this reason they are called colligative properties (denoting depending on the collection).We shall assume throughout the following that.(i) The solute is non - volatile.(ii) The solute does not dissolve in the solid solvent (the pure solid separates when the solution is frozen).FIRST COLLIGATIVE PROPERTYRelative Lowering of Vapour PressureWhen a non volatile solute is present in the solution, the vapour pressure of the solution will be less than vapour pressure of pure solvent. 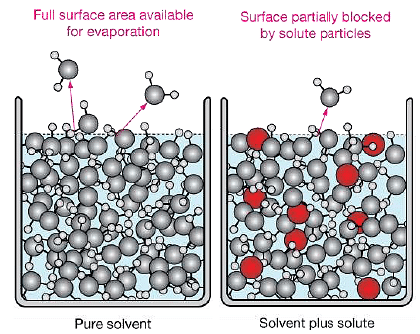 Vapour pressure in terms of molality of the solution:

where m is the molality

Key concept: The mole fraction of any substance does not change with temperature. So the mole fraction of the solute (Xsolute) does not change with temperature. Then, according to above expression the relative lowering of the vapour pressure should be independent of temperature. This is found to be so only for dilute solutions. Therefore, the Raoult's law, in this form, is applicable to the dilute solutions of non-volatile and non-electrolytic solutes only.OSTWALD - WALKER EXPERIMENTWhen air is passed through any gas, the gas diffuses into the air due to the principle of diffusion till the pressure of the gas in the air is equal to that of the gas outside. Therefore as air is passed through the solution, it absorbs the vapours of the solvent till the pressure of the solvent vapours in the air is P (vapour pressure of solvent in the solution).Mass of vapour absorbed or loss in weight of solution = PVm/RTWhere, P = pressure of the solvent vapours,V = volume available for vapours in the solution bulb,T = temperature of the bulb andm = molecular weight of the solvent.As the air passes through the solvent, the pressure difference of the vapours in the air and outside is P0 - P. So the air absorbs this amount of vapours and gets saturated.Loss in weight of solvent bulb = (P° - P)Vm/RTAs the sum of the losses of weight in the two containers is equal to the gain in weight of CaCl2,Gain in weight of CaCl2 filled tubes =  P°Vm/RT

MethodIn this method a stream of dry air is passed successively through (i) a solution (ii) the pure solvent (water) and (iii) a reagent (anhydrous CaCl2) which can absorb the vapours of the solvent. The complete assembly is shown in figure, given below: