COLOURA characteristic feature of many d-block metal complexes is their colours, which arise because they absorb light in the visible region. For example, [Cr(H2O6]2+ is sky blue, [Mn(H2O)6]2+ very pale pink, [Co(H2O)6]2+ pink, [MnO4]- intense purple and [CoCl4]2- dark blue. In contrast, salts of Sc(III) (d0) or Zn(II) (d10) are colourless.Colour in d-block complexes arise from transitions between electronic energy levels:

Charge transfer (CT) gives rise to intense absorptions, whereas ‘d–d’ bands are much weaker.Using the following colour wheel we can determine the observed colour of a compound from the colour of absorbed light.

In the following colour wheel, the complementary colours are given in opposite sectors to each others. For example, if any complex is absorbing red colour light, it will transmit green colour and hence will look green. If it will absorb violet colour, it will be yellow in colour and so on.

Selection Rules: The variation in relative intensities of absorption bands are explained by selection rules:

Where l is the azimuthal quantum number of the orbitals between which transition takes place.If ∆l = 0, the transitions are Laporte forbidden and therefore, absorbance is low. This rule can also be formulated in another way as following.The transition that occur between states of opposite parity i.e. g

u are allowed. For example, s

f transitions are allowed.The transitions that occur between states of same parity i.e. between g

If ∆S = 0, spin allowed.In other words, during electronic transitions if the spin of the electron is not changed, then the transition is spin allowed.  Transitions between states of different multiplicities are spin forbidden i.e.

A Laporte forbidden d-d transition is more intense than a spin forbidden transition. The intensities of various spectroscopic bands of 3d metal complexes are given below: 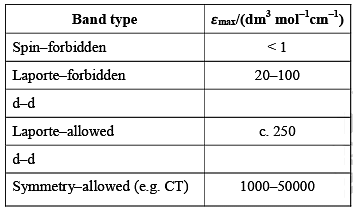 From the above table we see that charge transfer bands are most intense and spin forbidden transitions are least intense.

Relaxation in Selection Rules: The d–d transitions are forbidden, even some complexes gives colours. This is due to the relaxation in above selection rules. For example,

The above statements is summarised in the table given below:

The CT character is most often identified (and distinguished from π to π* transitions on ligands) by demonstrating solvatochromism, the variation of the transition frequency with changes in solvent permittivit y. Solvatochromism indicates that there is a large shift in electron densit y as a result of the transition, which is more consistent with a metal-ligand transition t han a ligand-ligand or metal-metal transition.The following figure summarizes the transitions we classify as charge transfer: 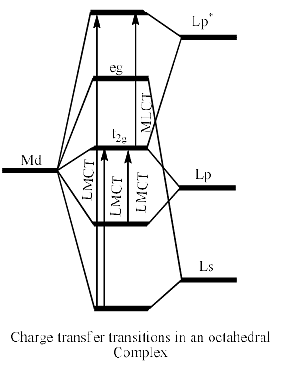 For example, tetraoxidoanions of metals with high oxidation numbers such as MnO4– are most familiar examples of LMCT. In these, an O lone-pair electron is promoted into a low-lying empty metal e orbital. High metal oxidation numbers correspond to a low d-orbital population (many are formally d0), so the acceptor level is available and low in energy.Energy required to transfer an electron from ligand to metal depends upon the LUMO of the metal ion and the HOMO of the ligand. For example, the trend in LMCT energies is:

This is due to that on moving from 3d to 4d to 5d series of transition metals in a group, size of metal ion increases and energy of LUMO increases. Therefore, the transfer of electron from HOMO to LUMO is feasible.

On moving from VO43– to CrO42– to MnO4– size of metal cation decreases. Therefore, energy of transfer decreases.

2. Metal to Ligand Charge Transfer (MLCT): In MLCT, an electron migrates from metal to ligand. MLCT are favoured in complexes in which:

In an octahedral complex when t2g and eg orbitals are occupied, two MLCT bands t2g to π* and eg to π* are observed.

Examples of compounds which show MLCT are given below:

3. Metal to Metal Charge Transfer (Intervalance Charge Transfer): In these transitions electron transfer takes place from metal of lower oxidation state to metal of higher oxidation state in a complex. For example,(a) Prussian blue KFe[Fe(CN)6] shows intense blue colour because of transfer of an electron from Fe2+ to Fe3+. In Prussian blue, Fe2+ is octahedrally coordinated with C of CN– ligands and Fe3+ is octahedrally coordinated with N of CN–. The electron transfer takes place through bridging cyanide ligand.

In this complex ion electron transfer occurs from Ru(II) to Ru (III) through pyrazine bridging ligand and give intense colour.

(c) Red lead (Pb3O4) contains Pb(II) and Pb(IV). Due to the electron transfer from Pb2+ to Pb4+ this complex gives intense red colour.

4. Intra Ligand Charge Transfer: Some ligands itself behave as chromospheres. There are four transitions  σ → σ*, π→ π*, n→ π*, n→σ* occur in a chromophore. When such ligand is coordinated with metal ion/atom, complex show colour.