For the common-collector configuration, the output characteristics are a plot of IE vs VCE for a range of values of IB. Many BJT transistors are used as an amplifier. Thus it is important to notice the limits of operations. At least 3 maximum values are mentioned in the data sheet.

a) Maximum power dissipation at collector: PCmax or PD.

There are few rules which need to be followed for BJT transistor to be used as an amplifier. The rules are: The transistor must be operated in active region! 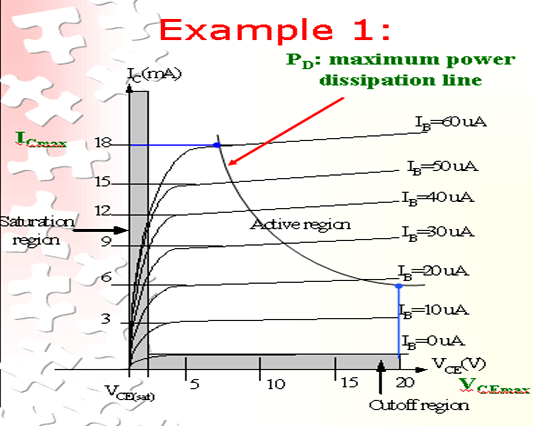 Refer to the fig. Example; A derating factor of 2mW/°C indicates the power dissipation is reduced 2mW each degree centigrade increase of temperature.

At any point on the characteristics the product of and must be equal to 360 mW.

PDMAX is usually specified at 25°C.

The higher temperature goes, the less is PDMAX