A disease is an abnormal condition affecting a healthy living organism. It is broadly divided into infectious and non-infectious.

Some Common Diseases In Humans

Immunity is defined as the ability of the body to protect, defend and fight against invading pathogens like bacteria, virus, and other foreign bodies and toxic substances. There are two types of immunity.

Active immunity is where the host produces antibodies in the form of dead or living microbes when it is exposed to antigens. It is a slow process, taking time to provide its full effective response. Passive immunity, on the other hand, is the immunity where ready-made antibodies are given directly to protect the body against any foreign agents. 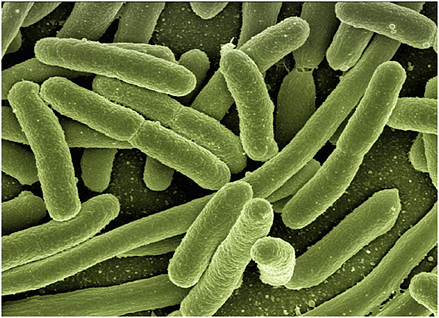 A large variety of entities exist. Some can thrive and grow inside the host. If the organism can inflict infectious diseases, it is an infectious agent. Manual infectious agents that can cause illness and infection are referred to as pathogens.

Pathogens are classified into four main categories concerned with the classes of pathogenicity relying on general risk analysis and assessment available under the purview of the present practical and theoretical frameworks. These include:

One of the below criteria has to be covered by the microbial species like:

This would imply that out of categories 2, 3 and 4 species, the certain chain would be downgraded to a class.

Malaria is a mosquito-borne infectious disease caused by various species of the parasitic protozoan microorganisms called Plasmodium. Malaria is a disease that man has battled with for a long time. The first evidence of this protozoan came from mosquitoes preserved in amber nearly 30 million years ago.It is even thought to have brought the Roman Empire to its knees. Malaria was so prevalent during the Roman times that the disease is also called ‘Roman Fever’. Today, the credit for actually discovering the parasite is given to Charles Louis Alphonse Laveran, a French physician. He even won the Nobel Prize in 1907 for his findings. 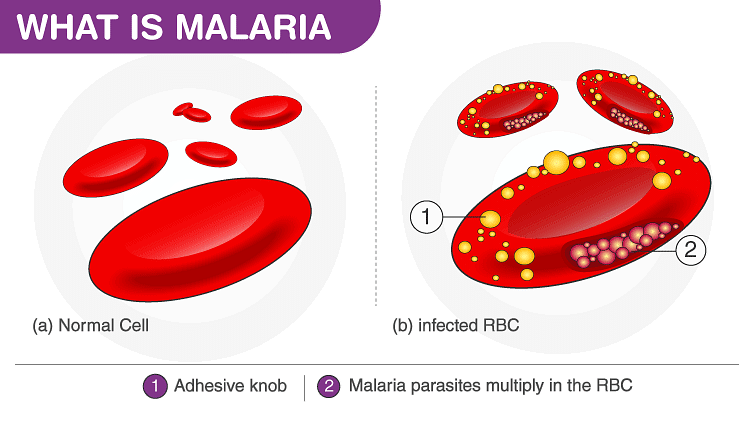 There are many factors that can cause malaria, such as –

Symptoms of malaria are exhibited within 7 to 18 days of being infected. Common symptoms include:

Sir Ronald Ross and his study on the transmission of the disease helped carve the way for future scientists to effectively combat the disease. His deep research showed that specifically, the female Anopheles stephensi mosquito is the vector of the disease, and addressing this problem will prevent malaria and in turn, save countless lives. 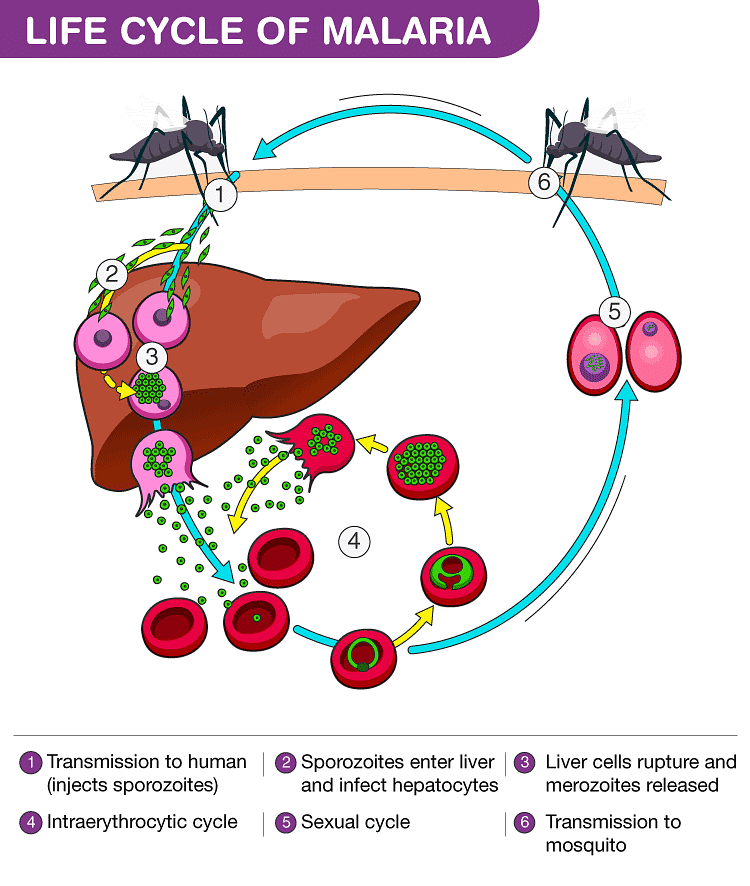 Malaria parasite exists in the form of a motile sporozoite. The vector of malaria i.e. the female Anopheles mosquito transmits the malarial sporozoites into the hosts. When an infected mosquito bites a human, the sporozoites are injected into the blood through the mosquito’s saliva. The sporozoites travel into our body and accumulate in the liver. These parasites initially multiply within the liver, by damaging the liver and rupturing the blood cells in the body. Malaria kills by causing the destruction of the red blood cells in the host. The parasites reproduce asexually in the RBCs, bursting the cells and releasing more parasites to infect more cells. The rupture of red blood cells by the malaria parasite releases a toxin called hemozoin which causes the patient to experience a condition known as the chills.When the female Anopheles mosquito bites an infected human, the parasites enter the mosquito’s body along the human blood it is drinking. It is inside the mosquito’s body that the actual development and maturing of the parasite happens. The parasites produced in the human body reach the intestine of the mosquito where the male and females cells fertilize each other to lead to the formation of a sporozoite. On maturing, the sporozoite breaks out the mosquito’s intestine and migrate to the salivary glands. Once they reach salivary glands, they wait till the mosquito bites another human and the process of infection and disease begins all over again. It is prudent however to observe that the complete development of the malaria parasite takes place in two different hosts; humans and mosquitoes.

Malaria is one of the major causes of preventable death in the world today. It affects more than 500 million people worldwide and causes 1 to 2 million deaths every year. It is a tropical infectious disease and almost 90 per cent of the cases are from Sub-Saharan Africa.There are two ways to deal with malaria – prevent the mosquito bite from happening (i.e preventative steps) or attack the parasites once they have infected the body.The first method advocates the use of mosquito nets and mosquito repellent such as permethrin to prevent mosquitoes from biting. The second form of treatment uses a chemical called Quinine present in the bark of a cinchona tree. A form of drug chloroquine has proven very effective against malaria even though it is not a vaccine.

Dengue is a mosquito-borne viral disease caused by the Dengue virus. In this case, the dengue virus is transmitted by female mosquitoes – Aedes aegypti. These dengue mosquitos generally bite during the daytime and are found everywhere (Both inside and outside the house). These mosquitos are found to be at the peak of their activeness at dawn and dusk. The symptoms can develop only after 6 to 10 days after bitten by an infected mosquito.Dengue fever is transmitted by mosquitos which carry the dengue virus, which has four varied serotypes to infect human beings. The serotypes mentioned above denotes a set of microorganisms that are exceptionally closely associated. These microorganisms can only be distinguished due to them having somewhat dissimilar antigens (the alien unit that affects the body and making us produce antibodies) which prompt the body to create some dissimilar antibodies. Dengue cases are more common in subtropical and the tropical regions of our planet, including our country.

Signs and Symptoms of Dengue Fever 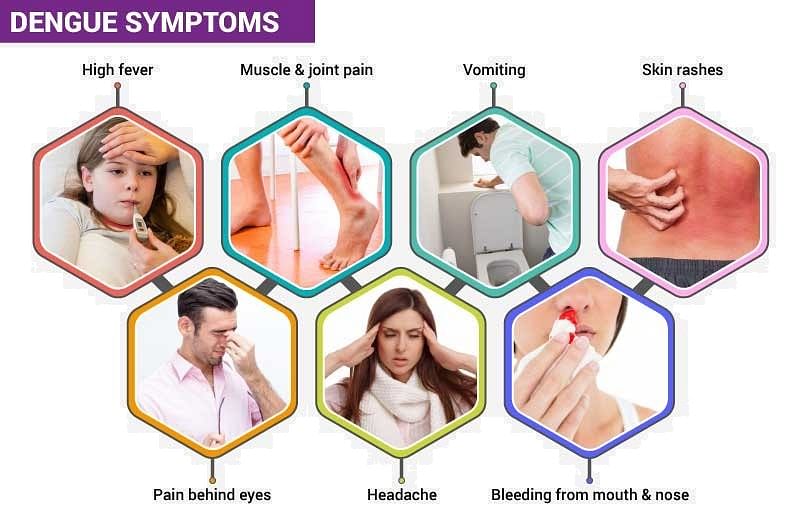 Dengue has an unexpected attack, viz. a sudden start and these symptoms could be an indicator of its onset.

The presence of the Dengue virus in the blood cells can be diagnosed by isolation of the virus, testing serum samples, and by other molecular methods. A patient with this syndrome is allowed to have a few blood tests to check the total count of red blood cells, blood platelets, and other physical examinations are conducted by the physician to evaluate that the symptoms are caused by a dengue infection.

Till today, there is no definite treatments or specific medicine to treat dengue infection. In general, the doctor may generally recommend regulating the pain and fever by using paracetamol instead of aspirin(as it might stimulate bleeding) and increasing fluid ingestion. Children below the age of 12 should not be given aspirin until and unless specially prescribed by the doctor. In severe cases, blood transfusions, intravenous (IV) fluid supplementation and 24 hours hospitalization are required.

The patient should take proper bed rest especially during the days when the fever is at its peak and take exclusion from work, school preschool or childcare. People suffering from dengue must stay away from places where they could get bitten by mosquitoes and should stay at home until they are no longer infectious (around 3-5 days).For avoiding this illness, make sure your surroundings are free of any water logging issues as the Aedes mosquito prefers to breed in stagnant clean water that could be found easily nearby our habitats. Until now, no vaccine has been developed to prevent Dengue virus. The only prevention is to avoid mosquito bites. 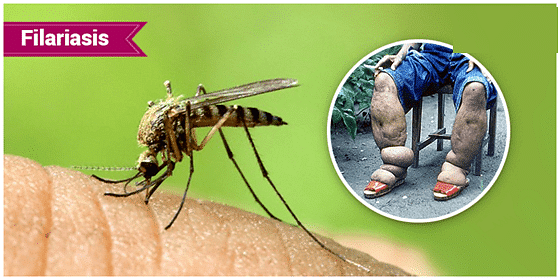 Filariasis a parasitic disease transmitted by black flies and mosquitoes. These parasites are thin, round, worm-like organisms. They appear white or translucent when observed under a microscope. The life span of filariae would be around 5 to 7 years. During their lifespan, they produce millions of larvae. The size of the female is between 250 and 300 μm long and the size of the males is roughly half as long as the females.

How is Filariasis Transmitted?

The causative organisms for Filariasis is a roundworm of the Filarioidea type. However, this is a vector-borne disease, with the primary vectors being mosquitoes and black flies. The infection spreads when a mosquito bites an already infected individual and then, goes on to bite a healthy person. This causes the larva of this parasite to enter the bloodstream of a healthy host and multiply. The complete stage of the larva to adult filarial worms is carried out within the lymphatic system. Once matured, the adult filarial worm starts to release larval forms called microfilariae. The newly generated microfilariae again enter into the mosquito along with the host’s blood and the cycle repeats itself. This parasitic disease is categorized on the basis of which body part is infected:

There are more than a hundred species of filarial worms currently discovered. Among them, only 8 to 9 are categorized as filarial parasites, which causes infections in human beings. 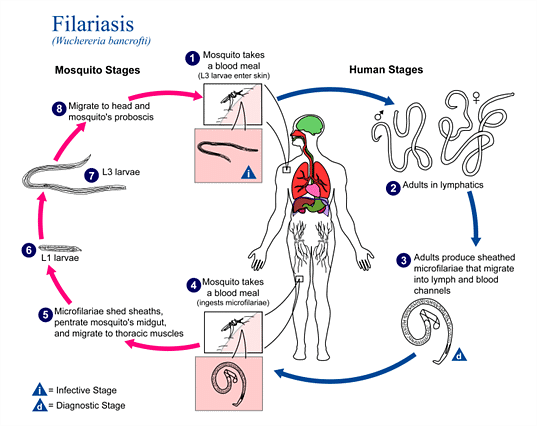 The general filariasis symptoms during its early stages include:

The filariasis symptoms seen in the later stage include:

The formation of pus in a cell due to the dying worms or a secondary bacterial infection results in:

It is quite difficult to diagnose this disease as the symptoms vary from one type to another type and the symptoms diagnosed in the early stage are similar to normal viral and bacterial infections. However, there are a few diagnostic processes carried out through body analysis, physical examination, body fluid test, including a blood test and urine test. Apart from these tests, few blood tests are carried out during the nighttime as the larvae are found most active at night.A popular diagnostic procedure involves blood being drawn from a larger vein and smeared on a glass slide. This slide is then examined under an electron microscope to check for the presence of parasitic larval roundworms. The presence of Filariasis is examined with the help of the Giemsa stain. The other diagnosis for subcutaneous filariasis is performed with a skin snip test.

In spite of all these measures, if filariasis is contracted, the best treatment would be a course of anthelmintic drugs or antibiotics. Anthelmintic would be the best option as it directly kills the worms. But if this isn’t feasible, antibiotics are a great alternative because they target the symbiotic bacteria that are present inside the worms. When the antibiotics kill these bacteria, the worms cannot survive and thrive inside their hosts, eventually hampering reproduction.

The parasitic roundworms belong to the family of Filarioidea and Phylum Nematoda. This particular species is known by the name filarial worms or filariae and the infection caused by them is called filariasis. General symptoms of filariasis include fever, chills, headache and skin lesions. Further progression of the disease will disfigure the patient with excessive swelling of the limbs.