So, in a dc machine let us say, dc generator this is the field poles, North Pole and South Pole. This is the brush position, nominal brush position the interpolar region and let us say the machine is rotating in this direction as a generator.These are the armature conductors, the polarity of the currents in such a direction which will oppose the rotation. If we take a develop diagram of this, which is cut it open, looks somewhat like this, for simplicity we have assumed two pole machine. This is the North Pole, this is the South Pole. So, these are the armature one brush is here, the other brush is here, the flux density wave form due to the armature due to the field is trapezoidal. While the armature reaction flux is such that, it produces a flux density of the whole left behind, which means moving in this direction. So, produces a residual flux density at the brush position, which induces a voltage in the coil undergoing commutation and creates problem with the commutation.(Refer Slide Time: 07:50) 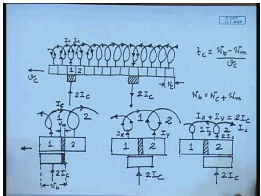 We will see what kind of problem may arise. For that just look at the developed diagram of a armature in the commutator segments. If this is these are the commutators each commutator connects to two windings, two coils. So, let us say, at any time a brush is in contact with commutator number 1, carrying the current into it and the other brush let us say it is here one pole each apart carrying out the same current. So, the brush current enters into the coil divides into two parts and flows in this manner. Let us say this individual coil currents are I c. This is I c this is also I c, therefore the total brush current entering is 2 I c.Similarly, 2 I c will be flowing out here. It is to be same that at the position of the brush the direction of circulation of the current in the coil reverses and between two brushes the coil circulating, the current circulating the same direction. Now, let us say this commutator segment is moving with a velocity of v c in this direction. So, let us look at what happens, when the commutation takes place from commutator number 1 to commutator number 2.So, let us magnify this position this is commutator number 1 and 2 these are separated by an insulation. Current is entering into the commutator through the brush just this was coil number 1, this is coil number 2. So, at the beginning of the commutation process begins, when the leading edge of this brush coincides with the end of the insulation between the two successive commutators. Let us also define if you other quantities for example, let us say the width of the one commutator segment is W c.This is W c, width of commutator segment is W c, width of the mica insulation here is W m and width of the brush is W b. In this particular case we will assume W b equal to W c plus W m although it is not necessary, in many cases brush widths are more. After some time the position of the commutator in the brasses will be as follows. This is the mica insulation; the brush should have moved connecting both the commutators. This current is still I c, we see that, this current is still 2 I c, we see that during this position these two commutator segments are shorted by the brush.These coil one is now shorted by the brush, in the beginning coil current one was I c in this direction. This 2 I c divides into this two by let us say I y and I x. So, we have I x plus I y equal to 2 I c. In the process of commutation this current will change, the current through this coil which was I c previously it will change to minus I c. Let us see how and at the end of commutation, the commutation process will end, when the brush has completely left commutator segment 1, the current flowing still in this direction. This was coil 1, this is coil 2.So, once it has left, this current will now be 2 I c, this current will be I c and this current will be I c so, we see if we look at coil current 1, coil 1 current see in the beginning of the commutation. It was I c flowing from left to right at the end of commutation still becomes I c, but from right to left. So, in the mean time during the shorting period the current in coil 1 changes from plus I c to minus I c. And the time taken can be easily calculated by the commutation time t c equal to during commutation the brush has moved by an amount W b minus W m by v c. During this period the current in coil one must change from if we assume this direction to be positive from plus I c to minus I c.(Refer Slide Time: 21:19) 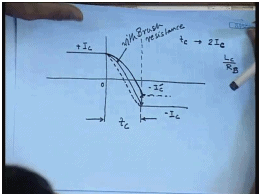 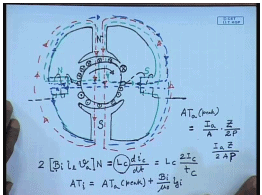 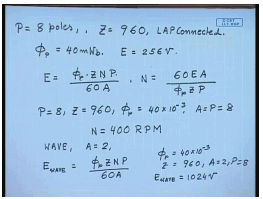 Let us say that, we have a d c machine with 8 poles, there are 960 that is, P equal to 8 there are 960 conductors that is z equal to 960, which are lap connected. The flux per pole of the machine is 40 milliwabor, if we want a no load induce voltage E of 256 volts, what should be the speed of rotation? This is the straight forward application of the formula of the induced voltage which is given by E equal to phi p into z N P by 60 A, where phi p is the flux per pole, z is total number of conductor, N is the speed of the rotation in R P M, P is the number of poles and A is the number of parallel paths.In other words N can be written as 60 E A divided by phi p z P, in the given problem P equal to 8, z equal to 960, phi p equal to 40 into10 to the power minus 3. And since the machine, armature is lap connected, A is equal to P equal to 8 therefore, the answer will be N equal to substituting all these values we get, N equal to 400 R P M. It will be interesting to find out, if I run the machine at the same 400 R P M, but change the armature conductor connection to wave, what will be the induced voltage.We know for wave connection A equal to always 2. So, for wave, E wave will be equal to phi p z N P by 60 A. Substituting the values phi p equal to 40 into 10 to the power minus 3, z equal to 960, A equal to 2, P equal to 8, we will get E wave equal to 1024volts. So, the induced voltage in a wave connected machine at the same speed will be much higher.(Refer Slide Time: 50:17) 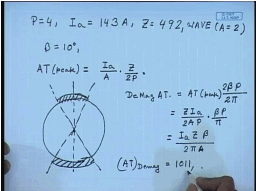 Now, let us look at the problem of the commutation.Let us say that, we have a machine with 4 pole, which carries a full load armature current I a of 143 amperes, there are total 492 wave connected conductors. In order to mitigate the condition problem a phase set beta of N degrees is applied to the brushes, what will be the demagnetising ampere turns? We have seen in our previous class that, armature reaction flux A T peak is given by I a by A, which is the coil current mu 2, z by 2 p.If we look at the picture, let us say this is the nominal magnetic neutralisation. If I give a phase lead, the brushes of beta, we have seen earlier that all the conductors inside the angle 2 beta produce demagnetising ampere turns. So, the demagnetising ampere turns De Mag A T is equal to A T peak beta. And is the 2 beta is the angle over which, the conductors will demagnetise and between two poles the separation is 2 pi by p.