Compaction is the application of mechanical energy to a soil so as to rearrange its particles and reduce the void ratio. It is applied to improve the properties of an existing soil or in the process of placing fill such as in the construction of embankments, road bases, runways, earth dams, and reinforced earth walls. Compaction is also used to prepare a level surface during construction of buildings. There is usually no change in the water content and in the size of the individual soil particles.

The objectives of compaction are:

Laboratory CompactionThe variation in compaction with water content and compactive effort is first determined in the laboratory. There are several tests with standard procedures such as:

Indian Standard Light Compaction Test Soil is compacted into a 1000 cm3 mould in 3 equal layers, each layer receiving 25 blows of a 2.6 kg rammer dropped from a height of 310 mm above the soil. The compaction is repeated at various moisture contents.Indian Standard Heavy Compaction TestIt was found that the Light Compaction Test (Standard Test) could not reproduce the densities measured in the field under heavier loading conditions, and this led to the development of the Heavy Compaction Test (Modified Test). The equipment and procedure are essentially the same as that used for the Standard Test except that the soil is compacted in 5 layers, each layer also receiving 25 blows. The same mould is also used. To provide the increased compactive effort, a heavier rammer of 4.9 kg and a greater drop height of 450 mm are used.

To assess the degree of compaction, it is necessary to use the dry unit weight, which is an indicator of compactness of solid soil particles in a given volume. The laboratory testing is meant to establish the maximum dry density that can be attained for a given soil with a standard amount of compactive effort. In the test, the dry density cannot be determined directly, and as such the bulk density and the moisture content are obtained first to calculate the dry density as

A series of samples of the soil are compacted at different water contents, and a curve is drawn with axes of dry density and water content. The resulting plot usually has a distinct peak as shown. Such inverted “V” curves are obtained for cohesive soils (or soils with fines), and are known as compaction curves. 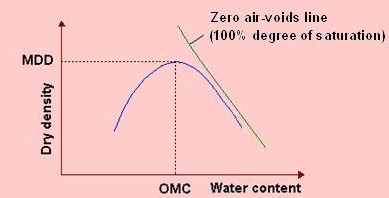 Thus, it can be visualized that an increase of dry density means a decrease of voids ratio and a more compact soil. Similarly, dry density can be related to percentage air voids (na) as

The relation between moisture content and dry unit weight for a saturated soil is the zero air-voids line. It is not feasible to expel air completely by compaction, no matter how much compactive effort is used and in whatever manner.

Effect of Increasing Water ContentAs water is added to a soil at low moisture contents, it becomes easier for the particles to move past one another during the application of compacting force. The particles come closer, the voids are reduced and this causes the dry density to increase. As the water content increases, the soil particles develop larger water films around them.

This increase in dry density continues till a stage is reached where water starts occupying the space that could have been occupied by the soil grains. Thus the water at this stage hinders the closer packing of grains and reduces the dry unit weight. The maximum dry density (MDD) occurs at an optimum water content (OMC), and their values can be obtained from the plot. 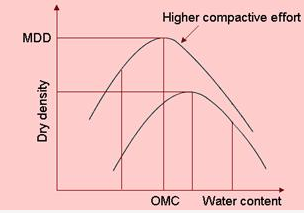 Factors Affecting CompactionThe factors that influence the achieved degree of compaction in the laboratory are:

For cohesionless soils (or soils without any fines), the standard compaction tests are difficult to perform. For compaction, application of vibrations is the most effective method. Watering is another method. The seepage force of water percolating through a cohesionless soil makes the soil grains occupy a more stable position. However a large quantity of water is required in this method. To achieve maximum dry density, they can be compacted either in a dry state or in a saturated state.

where emax and emin are the maximum and minimum void ratios that can be determined from standard tests in the laboratory, and gdmin and gdmax are the respective minimum and maximum dry densities

On the basis of relative density, sands and gravels can be grouped into different categories:

It is not possible to determine the dry density from the value of the relative density. The reason is that the values of the maximum and minimum dry densities (or void ratios) depend on the gradation and angularity of the soil grains.