. Working with index notation, the Cartesian components of the linearized strain is,

since the order of differentiation is immaterial. Equation (3.130) is called Saint Venant compatibility equations. It can be also seen that equation (3.130) has 81 individual equations as each of the index - i, j, k, l - takes values 1, 2 and 3. It has been shown that of these 81 equations most are either simple identities or repetitions and only 6 are meaningful. These six equations involving the 6 independent Cartesian components of the linearized strain are: 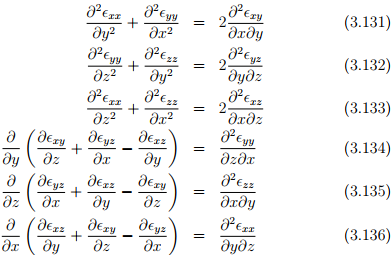 Next, we show that these 6 equations are necessary conditions. For this assume ∈xy = xy and all other component of the strains are 0. For this strain it can be shown that equation (3.131) alone is violated and that no smooth displacement field would result in this state of strain. Similarly, on assuming

we find that for each of these state of strain only one of the compatibility equations is violated; equation (3.132) for the first strain and (3.133) for the other strain. In the same fashion, on assuming