1. Read the extract given below and answer the questions that follow :

"Driving from my parent's home to Cochin last Friday morning,

I saw my mother, beside me,

of a corpse and realized with pain that she thought away" (a) Where was the poet coming from? Where was she going?The poet had gone to her parent's home to visit them. She was now going to Cochin from where she had to board an aeroplane for her journey back home.  (b) Where was the poet's mother? Ans. The poet's mother was sitting beside her in the car. She was travelling with the poet to Cochin to see her off at the airport.(c) How does the poet describes her mother? The poet describes her mother as old and pale. As she dozed off beside her, the mother looked almost like a corpse, for her face was colourless and seemed to have lost the fervour of life.  (d) Who does 'she' refer to in the last line ? What thoughts had she driven away? 'She' here refers to the poet's mother. Like all elderly people, she also suffered from the pain of loneliness and wanted her children to be with them. However, she seemed to have accepted her seclusion with quiet resignation, reconciling herself with the circumstances and compulsions of life.

2. Read the extract given below and answer the questions that follow: "but after the airport's security check,standing a few yards away,

I looked again at her, wan,

pale as a late winter's moon."

(a) Where was the poet standing?The poet was at Cochin airport waiting to board the plane after the security check.(b) Who does 'her' refer to here? How did she look like? 'Her' here refers to the poet's mother. She was an aged lady and hence looked pale and colourless.  (c) Why does the narrator 'look at her again'?The narrator looked at her mother once again for the last time before she left to reassure herself about the well-being of her mother. She had tried to drive away the pain she had felt on seeing her weak and aged mother. One last time she looked at her to wish her goodbye.(d) Explain: " wan, pale as a late winter's moon."  In this simile, the poet compares the mother's pale and withered face with the winter's moon. The moon seems to lose its brightness in the winter season as it is veiled behind fog and mist. The mother's face also seemed to have lost its radiance which was now misted by age. Winter symbolizes death and the waning moon symbolizes decay. 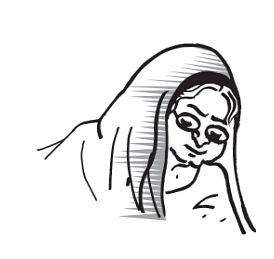 3. Read the extract given below and answer the questions that follow: “but soon put that thought away,

and looked out at young trees sprinting,the merry children spilling out of their homes”

(a) Who looked at the young trees?The poetess Kamala Das looked at the young trees.  (b) Which thought did she put away?The thought that she put away from her mind was that of her ageing mother's decaying condition and the thought that this could probably be their last meeting.  (c) What do young people sprinting trees signify?The young sprinting trees signify the energy of the youth and continuity of life in contrast to her thoughts related to her old-aged mother.  (d) Identify the figure of speech used in line no. 4.Personification

as a late winter’s moon and felt that old

but all I said was, see you soon, Amma,

The poet’s mother looked wan and pale due to her old age.

Q2. What is the comparison in the stanza?

The mother’s wan and pale face has been compared to the late winter’s moon.

Q3. What is her childhood’s fear?

It is the fear of aging and the approaching death of her mother.

Q4. Which figure of speech is used in the second line?

Simile – as a late winter’s moon.

Q5. How does she comfort/ console her mother?

She smiled and promised to see her mother soon.

Q6. What is the significance of the parting words?

These words signify hope and expectation to see her again.

Q7. What kind of pain/ ache does the poetess feel?

She feels pain on seeing the wan and pale face of her mother. It appears she will not live long.

Short question answers:Q1. Where was the poet driving to? Who was sitting beside her?

The poet was driving to Cochin. The poet’s mother was sitting beside her.

Q2.  What did the poet notice about the mother?

She noticed that her mother was weak, pale, and unconscious like a dead body.

Q3. How does the poet describe her mother in the poem?

The poet describes her mother as an old lady who has become pale, weak and worn out. She often dozes and remains unconscious about herself like a dead body.

The poet feels very sad thinking that her mother is nearing death. This painful thought makes her worried and anxious. So in order to divert her attention from her mother, she looks outside. The poet sees young trees running past them. She also sees little children coming out of their homes in a merry mood. She sees life and vitality in the outside world.

Q5. Why are the young trees described as ‘sprinting’?

The young trees are described as sprinting’ as the movement of the racing car makes the trees appear as if they are running along.

Q6. Why is the mother compared to the late winter’s moon?

The mother is compared to the late winter’s moon because, like the moon of the winter season, the poet’s mother also looks pale, dull, and grayish.

Q7. What childhood fears do you think the poet is referring to in the poem?

The poet feels uneasy and unprotected by the thought of losing her mother. She does not expect to see her mother again on her return. So she shows a childish unwillingness to leave her mother.

Q8. Why has the poet brought in the image of the merry children ‘spilling out of their homes’?

The poet, Kamala Das, has used the image of merry children spilling out of their homes to bring a contrast between old age and childhood. Her mother’s pale, colorless face stands for old and fading age. Merry children symbolize the spring of life, vigor, and happiness. They also symbolize the spontaneity of life in contrast to the passive and inactive life of her aged mother.

Q9. What does Kamala Das do after the security check-up? What does she notice?

After the security check-up, the poet stands a few yards away from her mother and gazes at her mother. She notices her declining age and finds her pale and worn out more than ever before.

Q10. The poet compares her mother to many things. Pick out two similes that reinforce this comparison.

The two similes are: “Her face ashen like that of a corpse.”

“I looked again at her wan, pale as a late winter’s moon”

Q11. What image does the poet use to describe death in the poem?

The poet uses the image “corpse” to describe death in the poem.

Q12. Cite an example of one device of contrast that the poet uses in the poem.

The device of contrast that the poet uses in the poem is the old age of her mother and the young trees and children playing merrily. The poet compares the youth, energy, vitality, and jubilance of childhood.

Q13. What do the parting words of the poet and her smile signify?

The poet's parting words, ‘see you soon, Amma,’ are expressive of the dilemma and confusion in her mind. They not only hide her anxiety and fear about her mother’s rather frail health but also reflect a faint hope that the old woman would survive long enough for the two to meet again.

The poet said, “See you soon, Amma,” in order to give her mother moral support and encouragement. She said so to give her mother hope that she would see her again. By “smile and smile and smile…” she means to make herself and her mother hope to see each other again. It is actually a painful smile. The poet tries to conceal the swelling emotions by smiling. By using this poetic device of repetition, the poet has made the poetic language rich by depicting many hidden emotions through “smile.”

Q15. Discuss the mother-daughter relationship as described in the poem.

Mother- daughter relationship, as described in the poem, is very sensitive and full of love, care, and emotions. Mother has a deep emotional link to her children and does not want them to be away. In particular, when the mother reaches her old age, she becomes more concerned and worried about her children. The daughter also tends to bear a specific kind of emotional link to her mother. She tries to remain close to her mother and feels very bad and worried when separated from her. In this poem, the mother does not want her daughter to leave her; similarly, the daughter gives a mysterious and indefinable smile which is to show unwillingness and anxiety about leaving her mother.

Q16. “My Mother at sixty-six” is an emotional account of the poet about her old mother. Discuss.

“My Mother at sixty-six” is an emotional account of the poet about her old mother. She feels very sad and depressed after seeing her pale, weak, and worn out. She tries her best to divert her thought but remains unsuccessful, and this thought haunts her mind now and then. Till the end of the poem, she feels very sad and disappointed about the declining age of her mother. She is unable to express her fears and emotions to her mother with the thought of disheartening her. She bids goodbye to her mother by just smiling in order to hide her hurt feelings and encourage her mother.

The document Comprehension Questions: Poem - My Mother at Sixty Six - Notes | Study English Class 12 - Class 12 is a part of the Class 12 Course English Class 12.
All you need of Class 12 at this link: Class 12
Attempt Now
Join Course