Compression and Consolidation of Soils

When a soil layer is subjected to vertical stress, volume change can take place through rearrangement of soil grains, and some amount of grain fracture may also take place. The volume of soil grains remains constant, so change in total volume is due to change in volume of water. In saturated soils, this can happen only if water is pushed out of the voids. The movement of water takes time and is controlled by the permeability of the soil and the locations of free draining boundary surfaces.

Primary consolidation is the major component and it can be reasonably estimated. A general theory for consolidation, incorporating three-dimensional flow is complicated and only applicable to a very limited range of problems in geotechnical engineering. For the vast majority of practical settlement problems, it is sufficient to consider that both seepage and strain take place in one direction only, as one-dimensional consolidation in the vertical direction.

Soils are often subjected to uniform loading over large areas, such as from wide foundations, fills or embankments. Under such conditions, the soil which is remote from the edges of the loaded area undergoes vertical strain, but no horizontal strain. Thus, the settlement occurs only in one-dimension.

The compressibility of soils under one-dimensional compression can be described from the decrease in the volume of voids with the increase of effective stress. This relation of void ratio and effective stress can be depicted either as an arithmetic plot or a semi-log plot. 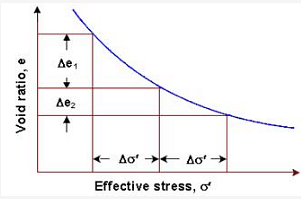 In the arithmetic plot as shown, as the soil compresses, for the same increase of effective stress Ds', the void ratio reduces by a smaller magnitude, from De1 to De2. This is on account of an increasingly denser packing of the soil particles as the pore water is forced out. In fine soils, a much longer time is required for the pore water to escape, as compared to coarse soils.

For a small range of effective stress,

The -ve sign is introduced to make av a positive parameter.

If e0 is the initial void ratio of the consolidating layer, another useful parameter is the coefficient of volume compressibility, mv, which is expressed as

It represents the compression of the soil, per unit original thickness, due to a unit increase of pressure.

The figure shows the relation of void ratio and effective stress of a clay soil as a semi-log plot. 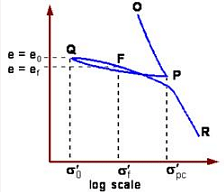 The distance from the normal consolidation line has an important influence on soil behaviour. This is described numerically by the overconsolidation ratio (OCR), which is defined as the ratio of the preconsolidation stress to the current effective stress.

Note that when the soil is normally consolidated, OCR = 1

Settlements will generally be much smaller for structures built on overconsolidated soils. Most soils are overconsolidated to some degree. This can be due to shrinking and swelling of the soil on drying and rewetting, changes in ground water levels, and unloading due to erosion of overlying strata.

For NC clays, the plot of void ratio versus log of effective stress can be approximated to a straight line, and the slope of this line is indicated by a parameter termed as compression index, Cc.