Definition: A conjunction is a word that connects sentences or parts of a sentence together. Transitions help fluency in writing and speaking.

Coordinating ConjunctionsCoordinating conjunctions are short and simple transitions that are composed of two or three letters. They are used to avoid short, choppy, run-on etc. sentences. They show the way ideas/entities are related to each other.The word FANBOYS is used as a reminder for these conjunctions:

FANBOYS - For, And, Nor, But, Or, Yet, So:Avoid run-on sentences and other grammatical errors by using connectives. The list of those seven coordinating conjunctions are given here.

Here are the relationships that the seven coordinators show:

Notice the use of singular and plural verb form

Not only...but alsoLinks two clauses    She is not only beautiful but also very intelligent.    He disappointed not only his father but also everybody else around him.

Subordinating conjunctions connect the dependent clause of a sentence with the independent clause and show the relationship between the two. We use a comma in between if the subordinator (when, before, because, although...) is at the beginning of the sentence.Although it was raining, she went out for a walk.She went out for a walk although it was raining.Because she was tired, she went straight to the bed.She went straight to the bed because she was tired.After she (had) made a phone call, she left home.She left home after she (had) made a phone call.

Table of Subordinating Conjunctions with their meanings and example sentences online for English learners and teachers. 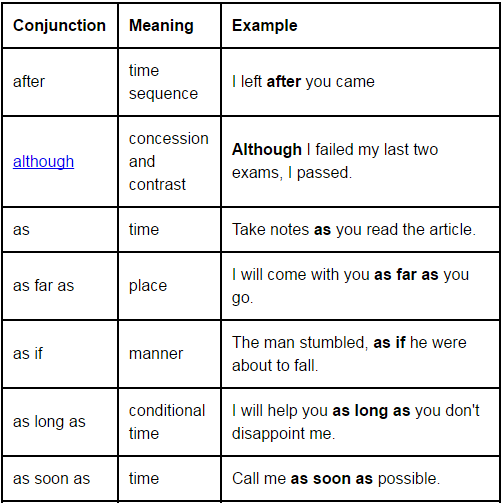 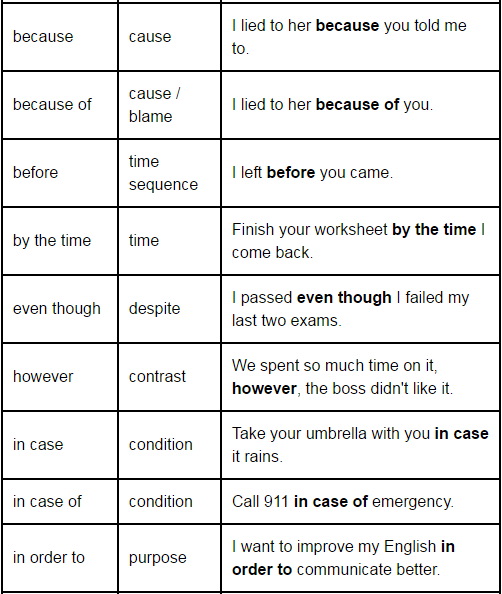 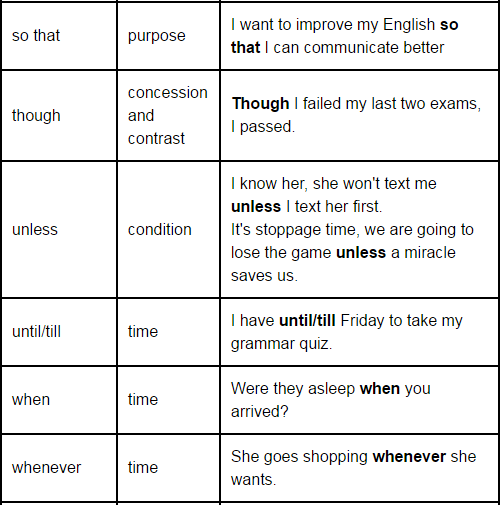 In the following examples, the conjunctions are in bold for easy recognition:

The following exercises will help you gain greater understanding about how conjunctions work. Choose the best answer to complete each sentence.

Answer: 4. My brother loves animals. He just brought a puppy and a kitten home with him.

Answer: 2.  I’d like to thank you for the lovely gift.

Answer: 3. They do not smoke, nor do they play cards.

Answer: 4. I’m getting good grades because I study every day.