The document Constant Electric Field In Vacuum (Part - 1) - Electrodynamics, Irodov JEE Notes | EduRev is a part of the JEE Course Physics For JEE.
All you need of JEE at this link: JEE

Q. 1. Calculate the ratio of the electrostatic to gravitational interaction forces between two electrons, between two protons. At what value of the specific charge q/m of a particle would these forces become equal (in their absolute values) in the case of interaction of identical particles?

Q. 2. What would be the interaction force between two copper spheres, each of mass 1m, separated by the distance 1 m, if the total electronic charge in them differed from the total charge of the nuclei by one per cent?

Solution. 2. Total number of atoms in the sphere of mass 1 gm

So the total nuclear charge

Hence force of interaction between these two spheres,

Q. 3. Two small equally charged spheres, each of mass m, are suspended from the same point by silk threads of length 1. The distance between the spheres x << 1. Find the rate dqldt with which the charge leaks off each sphere if their approach velocity varies as

where a is a constant.

Solution. 3. Let the balls be deviated by an angle θ, from the vertical w hen separtion betw een them equals x. 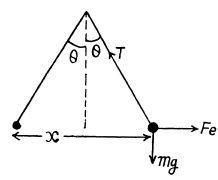 Applying Newton’s second law of motion for any one of the sphere, we get,

Differentiating Eqn. (5) with respect to time

Q. 4. Two positive charges q1 and q2 are located at the points with radius vectors r1 and r2. Find a negative charge q3 and a radius vector r3 of the point at which it has to be placed for the force acting on each of the three charges to be equal to zero.

Solution. 4. Let us choose coordinate axes as shown in the figure and fix three charges, q1 , q2 and q3 having position vectors 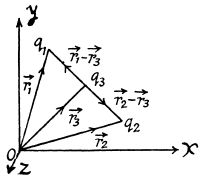 Now, for the equilibrium of q3

Also for the equilibrium of q1?

Substituting the value of

Q. 5. A thin wire ring of radius r has an electric charge q. What will be the increment of the force stretching the wire if a point charge q0 is placed at the ring's centre? 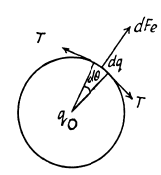 Q.7. Point charges q and —q are located at the vertices of a square with diagonals 2l as shown in Fig. 3.1. Find the magnitude of the electric field strength at a point located symmetrically with respect to the vertices of the square at a distance x from its centre.

Solution. 7. Let us fix the coordinate system by taking the point of intersection of the diagonals as the origin and let

directed normally, emerging from the plane of figure. 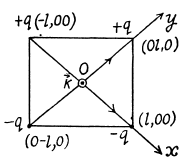 Q.8. A thin half-ring of radius R = 20 cm is uniformly charged with a total charge q = 0.70 nC. Find the magnitude of the electric field strength at the curvature centre of this half-ring.

Solution. 8. From the symmetry of the problem the sought field. 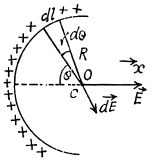 Q.9. A thin wire ring of radius r carries a charge q. Find the magnitude of the electric field strength on the axis of the ring as a function of distance l from its centre. Investigate the obtained function at 1 ≫ r. Find the maximum strength magnitude and the corresponding distance l. Draw the approximate plot of the function E(l).

Solution. 9. From the symmetry of the condition, it is clear that, the field along the normal will be zero 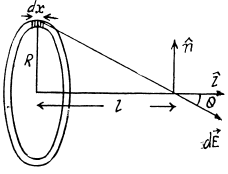 and for l ≫ R, the ring behaves like a point charge, reducing the field to the value,

Q.10. A point charge q is located at the centre of a thin ring of radius R with uniformly distributed charge —q. Find the magnitude of the electric field strength vector at the point lying on the axis of the ring at a distance x from its centre, if x ≫ R.

Solution. 10. The electric potential at a distance a: from the given ring is given by,

Neglecting the higher power of

Solution. 11. From the solution of 3.9, the electric field strength due to ring at a point on its axis (say x-axis) at distance x from the centre of the ring is given by :

every point on the axis is directed along the x-axis (Fig.).

Let us consider an element (dx) on thread which carries the charge (λdx). The electric force experienced by the element in the field of ring.

Q.12. A thin nonconducting ring of radius R has a linear charge density λ = λ0 cos φ, where λ0  is a constant, φ is the azimuthal angle. Find the magnitude of the electric field strength (a) at the centre of the ring; (b) on the axis of the ring as a function of the distance x from its centre. Investigate the obtained function at x ≫ R.

the point O is directed to the right, and its magnitude is equal to  the sum of the projection onto the direction of

from elementary charges dq. The projection of vector

Integrating (1) over φ between 0 and 2 π  we find the magnitude of the vector E: 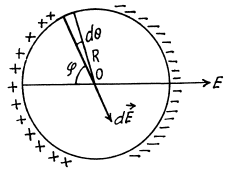 (b) Take an element S at an azimuthal angle φ from the x-axis, the element subtending an angle dφ at the centre.

The elementary field at P due to the element is

The component along OP vanishes on integration as

On integration, the part along OY vanishes. Finally

Q.13. A thin straight rod of length 2a carrying a uniformly distributed charge q is located in vacuum. Find the magnitude of the electric field strength as a function of the distance r from the rod's centre along the straight line (a) perpendicular to the rod and passing through its centre; (b) coinciding with the rod's direction (at the points lying outside the rod). Investigate the obtained expressions at r ≫ a.

Solution. 13. (a) It is clear from symmetry considerations that vector

be directed as shown in the figure. This shows the way of solving this problem : we must find the component dEr of the field created by the element dl of the rod, having the charge dq and then integrate the result over all the elements of the rod. In this cas

is the linear charge density. Let us reduce this equation of the form convenient for integration. Figure show s that dl cos 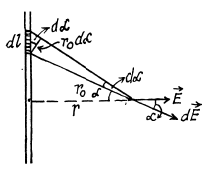 Note that in this case also

of the field of apoint charge.(b) Let, us consider the element of length dl at a distance l from the centre of the rod, as shown in the figure.

Then field at P, due to this element.

if the element lies on the side, shown in the diagram, and

if it lies on other side.

On integrating and putting

Q.14. A very long straight uniformly charged thread carries a charge λ. per unit length. Find the magnitude and direction of the electric field strength at a point which is at a distance y from the thread and lies on the perpendicular passing through one of the thread's ends.

Solution. 14. The problem is reduced to finding Ex and Ey viz . the projections of

Let us start with Ex. The contribution to Ex. from the charge element of the segment dx is

Let us reduce this expression to the form convenient for integration. In our case, dx = r Ja/cos α, r = y/cosα. Then

Integrating this expression over α between 0 and π/2, we find 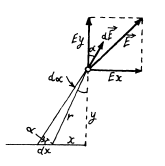 In order to find the projection Ey it is sufficient to recall that differs from dEx in that sin α in (1) is simply replacedby cos α.This gives

We have obtained an in teresting result :

Ex = Ey in dependently of y,

oriented at the angle of 45° to the rod. The modulus of

Q.15. A thread carrying a uniform charge λ per unit length has the configurations shown in Fig. 3.2 a and b. Assuming a curvature radius R to be considerably less than the length of the thread, find the magnitude of the electric field strength at the point O.

which is also the sought result.

(b) Using the solution of 3.14 (a) , net field strength at O due to stright parts equals

and is directed vertically down. Now using the solution of Q.15

(a), field strength due to the given curved part (semi-circle) at the point O becomes

Q.16. A sphere of radius r carries a surface charge of density σ =  ar, where a is a constant vector, and r is the radius vector of a point of the sphere relative to its centre. Find the electric field strength vector at the centre of the sphere.

Solution. 16. Given charge distribution on the surface

is shown in the figure. Symmetry of this distribution implies that the sought

the centre O of the sphere is opposite to

Again frgm symmetry, field strength due to any ring element

is also opposite to

Q.17. Suppose the surface charge density over a sphere of radius R depends on a polar angle θ as σ = σ0  cos θ, where σ0  is a positive constant. Show that such a charge distribution can be represented as a result of a small relative shift of two uniformly charged balls of radius R whose charges are equal in magnitude and opposite in sign. Resorting to this representation, find the electric field strength vector inside the given sphere.

Solution. 17. We start from two charged spherical balls each of radius R with equal and opposite charge densities + p and - p. The centre of the balls are at

respectively so the equation of their surfaces are

considering a to be small. The distance between the two surfaces in the radial direction at angle θ is

and does not depend on the azimuthal angle. It is seen from the diagram that the surface of the sphere has in effect a surface density

Inside any uniformly charged spherical ball, the field is radial and has the magnitude given by Gauss’s theorm 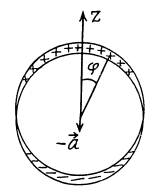 In vector notation, using the fact the V must be measured from the centre of the ball, we get, for the present case

is the unit vector along the polar axis from which θ is measured.