In actual practice, the three coils form three windings distributed over several slots. These windings may be connected in star or delta and three terminations are brought out. These are conventional three phase windings which are discussed in greater detail in the chapters on alternators. Such windings are present n the stator as well as rotor. A photograph of 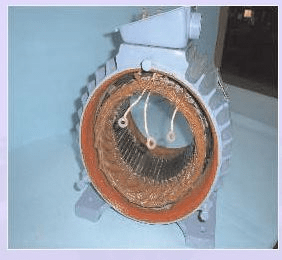 Induction machines, which have these kinds of windings and terminals that are brought out, are called slip ring machines. The reader may note that in order that torque is produced current must ﬂow in the rotor. To achieve that, the stationary brush terminals must either be shorted, or connected to a circuit allowing current ﬂow. Sometimes a star connected resistor bank is connected so that the developed starting torque is higher. There are also other forms of power electronic circuitry that may be connected to the rotor terminals to achieve various functions.

The popularity of the induction machine however, stems from another variety of rotor Figure 10: Coils in the stator Figure 13: Slip rings and brushes in induction machines — a schematic that is used. This rotor has slots into which copper or aluminium bars are inserted. These bars are then shorted by rings that are brazed on to each of the rotor ends. Figure 14 shows a simple schematic. Such a rotor is called squirrel cage rotor. This rotor behaves like a short-circuited winding and hence the machine is able to perform electromechanical energy conversion. This type of rotor is easy to manufacture, has no sliding contacts and is very robust. It is this feature that makes induction machine suitable for use even in hazardous environments and reliable operation is achieved. The disadvantage of this type of rotor is that the motor behavior cannot be altered by connecting anything to the rotor — there are no rotor terminals.

Fig. 15 shows a photograph of a squirrel cage rotor. The rotor also has a fan attached to it. This is for cooling purposes. The bars ( white lines on the surface) are embedded in the rotor iron which forms the magnetic circuit. The white lines correspond to the visible portion of the rotor bar.

Sometimes two rotor bars are used per slot to achieve some degree of variability in the starting and running performances. It is to make use of the fact that while high rotor 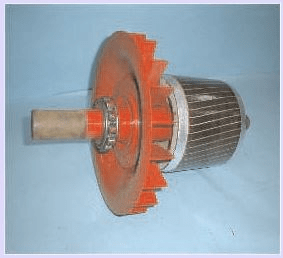 To summarize the salient features discussed so far,

1. The stator of the 3 - phase induction machine consists of normal distributed AC windings.

3. These stator currents cause a rotating ﬂux pattern (the pattern is a ﬂux distribution which is sinusoidal with respect to the space angle) in the air gap.

4. The rotating ﬂux pattern causes three phase induced e.m.f.s in rotor windings (again normal ac windings). These windings, if shorted, carry three phase-balanced currents.Torque is produced as a result of interaction of the currents and the air gap ﬂux.

5. The rotor may also take the form of a squirrel cage arrangement, which behaves in a manner similar to the short-circuited three phase windings.