Construction of a Statistical Table

A statistical table has at least four major parts and some other minor parts.

The general sketch of table indicating its necessary parts is shown below: 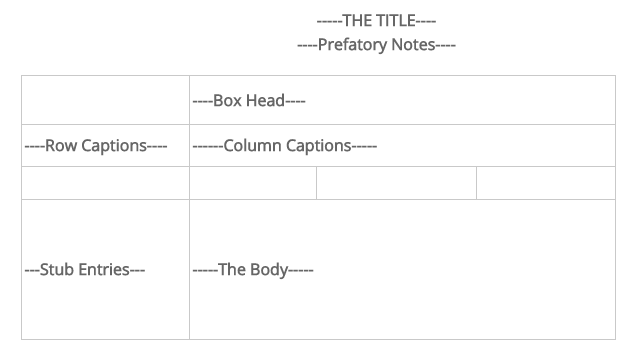 The title is the main heading written in capitals shown at the top of the table. It must explain the contents of the table and throw light on the table, as whole different parts of the heading can be separated by commas. There are no full stops in the little.

The vertical heading and subheading of the column are called columns captions. The spaces where these column headings are written is called the box head. Only the first letter of the box head is in capital letters and the remaining words must be written in lowercase.

The horizontal headings and sub heading of the row are called row captions and the space where these rows headings are written is called the stub.

This is the main part of the table which contains the numerical information classified with respect to row and column captions.

A statement given below the title and enclosed in brackets usually describes the units of measurement and is called the prefatory notes.

These appear immediately below the body of the table providing additional explanation.