The document Consumption Function - Macroeconomics B Com Notes | EduRev is a part of the B Com Course Macro Economics.
All you need of B Com at this link: B Com

Keynes in his General Theory postulated that aggregate consumption is a function of aggregate current disposal income. The relation between consumption and income is based on his fundamental psychological law of consumption which states that when income increases consumption expenditure also increases but by a smaller amount.

The Keynesian consumption function is written as

Where a is the intercept, a constant which measures consumption at a zero level of disposal income, c is the marginal propensity to consume MPC and Y is the disposal income.

The above relation that consumption is a function of current disposable income whether linear or non-linear is called the absolute income hypothesis. This consumption function has the following properties: 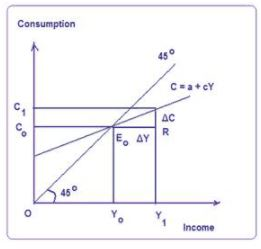