The document Coupling Constants - Spectroscopy Chemistry Notes | EduRev is a part of the Chemistry Course Organic Chemistry.
All you need of Chemistry at this link: Chemistry

Coupling constant is a quantitative measure of spin-spin splitting. It denotes how strongly a nucleus is affected by the spin-state of its neighbour.

1. Based on the coupling partner:

2. Based on the number of intervening bonds:

3. Others: Specific couplings of higher order can be extremely usefulin NMR analysis.

Adjacent nuclei prefer to be in opposite spin states in the ground state. For a typical C—H bond, two peaks are observed in the 13C spectrum, due to the two shown transitions. 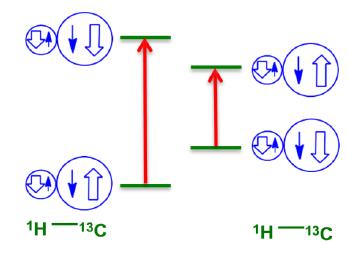 Some common one-bond coupling constants have been displayed below: Commonly called as geminal coupling, these are usually smaller in magnitude than 1 bond coupling. Geminal coupling increases in magnitude as the decreases, due to higher electron spin correlation. 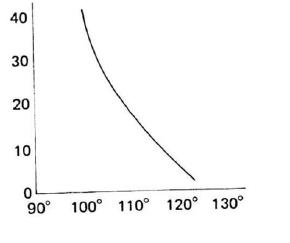 Commonly called vicinal coupling, these usually follow the (n+1) rule in simple aliphatic hydrocarbon chains. Nuclear and electronic spin interactions carry the spin information from one hydrogen to its neighbor.

As a result, the best overlap occurs when the C—H bonds are at a dihedral angle of 0°.

The magnitude of vicinal coupling is directly related to the dihedral angle between the C—H bonds in question. The Karplus equation relates dihedral angle to the coupling constant between two vicinal hydrogen nuclei. 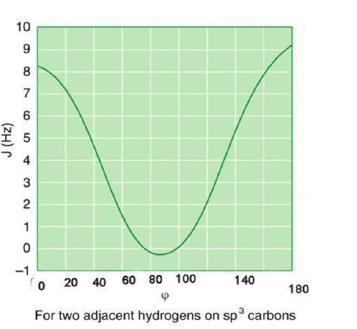 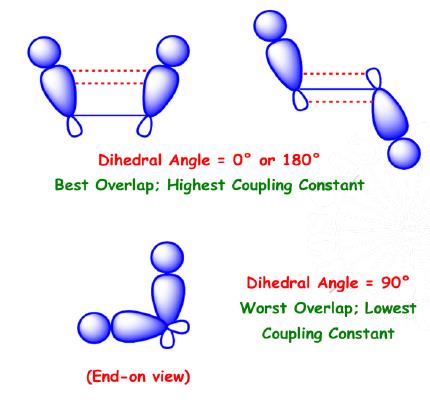 Very rarely, but often significantly, coupling takes place between two atoms separated by four bonds or more (nJ; n≥4). The common systems where this is exhibited are allylic systems, rigid bicyclic systems, and aromatic rings. Since these couplings are observed through a large number of bonds, a highly specific stereochemical arrangement is essential.