Refining of crude oils or petroleum essentially consists of primary separation processes and secondary conversion processes. The petroleum refining process is the separation of the different hydrocarbons present in the crude oil into useful fractions and the conversion of some of the hydrocarbons into products having higher quality performance. Atmospheric and vacuum distillation of crude oils is the main primary separation processes producing various straight run products, e.g., gasoline to lube oils/vacuum gas oils (VGO). These products, particularly the light and middle distillates, i.e., gasoline, kerosene and diesel are more in demand than their direct availability from crude oils, all over the world.

Crude oil comes from the ground, which contains variety of substances like gases, water, dirt (minerals) etc. Pretreatment of the crude oil is important if the crude oil is to be transported effectively and to be processed without causing fouling and corrosion in the subsequent operation starting from distillation, catalytic reforming and secondary conversion processes.

Impurities in the crude oil are either oleophobic or oleophilic.

Field separation is the first step to remove the gases, water and dirt that accompany crude oil coming from the ground and is located in the field near the site of the oil wells.

The field separator is often no more than a large vessel, which gives a quieting zone to permit gravity separation of three phases: gases, crude oil and water (with entrained dirt).

It is a water washing operation performed at the refinery site to get additional crude oil clean up.

Desalting process is used for removal of the salts, like chlorides of calcium, magnesium and sodium and other impurities as these are corrosive in nature. The crude oil coming from field separator will continue to have some water/brine and dirt entrained with it. Water washing removes much of the water-soluble minerals and entrained solids (impurities). There are two types of desalting: single & multistage desalting. Commercial crudes, salt contents 10-200 ppb, earlier 10-20 ppb were considered satisfactorily low. However, many refiners now aim at 5 ppb or less (1-2 ppb) which is not possible through single stage desalting, hence two stage desalting is required.

Desalting process is two stage process: forming emulsion of crude and water and demulsification in which emulsion is broken by means of electric field and demulsifying chemicals.Desalting is carried out by emulsifying the crude oil and then separating the salt dissolved in water. Two phases water/oil is separated either by using chemicals to break down the emulsion or by passing high potential electric current. By injecting water the salts dissolved in the water and solution are separated from the crude by means of electrostatic separating in a large vessel. 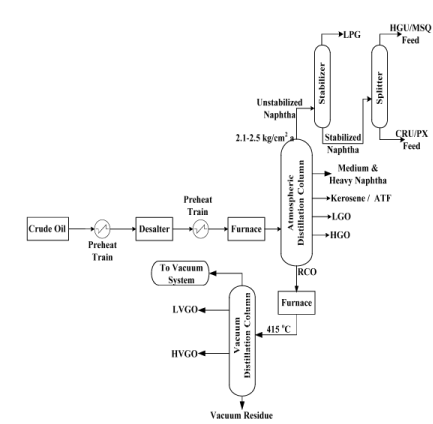 The desalted crude oil from the second stage desalting process is heated in two parallel heat exchanger. The preheated crude having temperature of about 180oC is goes to pre flash drum where about 3-4percent of light ends are removed. The preheated crude from the preheater section is further heated and partially vaporized in the furnace containing tubular heater. The furnace has two zones: radiant section and convection section. The radiant zone forms the combustion zone and contains the burners. In convection zone the crude is further heated (inside the tube) by the hot flue gases from the radiant section.

Naphtha stabilizer, caustic wash and naphtha splitting section: The unstablished naphtha from the atmospheric distillation column is pumped to the naphtha stabilizer section for separation of stabilized overhead vapours which is condensed to recover LPG which is treated in caustic and amine treating unit. The stabilized naphtha is further separated into light, medium and heavy naphtha.

Operating Variables in ADU unit are

Chemical injection system consist of caustic injection and ammonia injection and use of corrosion inhibitor, use of demulsifier, addition of trisodium phosphate in boiler feed water.. Corrosion in the atmospheric tower overhead system is a common phenomenon and the problem is increasing with increasing use of the heavier crude oil. Corrosion is primarily due to hydrogen chloride, which is produced by hydrolysis of the chloride salts remaining after desalting. Other sours of corrosion are naphthenic acid and hydrogen sulphide. High caustic injection is to avoided as high caustic injection system may lead to fouling in vacuum and visbreaker furnaces. ammonia injection is done to maintain the pH. Corrosion inhibitor in kerosene and naphtha is required to combat the corrosion. De-emulsifier is used to demulsify the water and crude emulsion. Trisodium phosphate is used to maintain pH and prevent corrosion in the boiler drums