Ques 1: A thin circular ring of mass M and radius R is rotating about its axis with an angular speed ω0. Two particles each of mass m are now attached at diametrically opposite points. Find the new angular speed of the ring.Ans:

Ques 2: If the ice at the poles melts and flows towards the equator, how will it affect the duration of day-night ?Ans: As ice melts at pole and flows to equator, it gets distributed away from centre (as equitorial radius is greater than polar radius) such that moment of inertia about axis increases which results in decrease in angular speed (as Iω= constant), this leads in increase in time period

or duration of day and night.

Ques 1: In sample example 9.16, find the equation y(x)if at the initial moment the axis c of the disc was located at the point O after which it moved with a constant linear acceleration a0 (and the zero initial velocity) while the disc rotates counter clockwise with a constant angular velocity w.Ans:

Ques 2. A uniform bar of length l stands vertically touching a wall OA. When slightly displaced, its lower end begins to slide along the floor. Obtain an expression for the angular velocity w of the bar as a function of q. Neglect friction everywhere.

Ques 2: A ring of radius R rolls on a horizontal ground with linear speed v and angular speed ω. For what value of 8 the velocity of point P is in vertical direction, (v < R ω)

Ques 3: The topmost and bottommost velocities of a disc are v1 and v2 (< v1) in the same direction. The radius is R. Find the value of angular velocity ω.Ans: 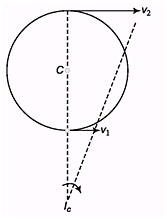 As the torque due to applied force is anti-clockwise, so the point of contact tries to slip rightwards and friction tries to prevent it and so acts leftwards.Ques 4. A cylinder is rolling down a rough inclined plane. Its angular momentum about the point of contact remains constant. Is this statement true or false?Ans: As during rolling down, friction acts upward which exerts a torque, thus the angular momentum of the system is not conserved. Even if we take axis of rotation at point of contact, then component of weight exerts torque, so, statement is false.Ques 5. Two forces F1 and F2 are applied on a spool of mass M and moment of inertia I about an axis passing through its centre of mass. Find the ratio F1/F2 , so that the force of friction is zero. Given that I < 2Mr2.

Ans: Force of friction will be zero, only when there is uniform pure rolling, i.e., there is no external unbalanced torque.Thus, a = Rα

Ques 6. A disc is placed on the ground. Friction coefficient is m. What is the minimum force required to move the disc if it is applied at the topmost point?Ans: 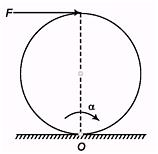 Ques 1: A cube is resting on an inclined plane. If the angle of inclination is gradually increased, what must be the coefficient of friction between the cube and plane so that,(a) cube slides before toppling?(b) cube topples before sliding?Ans: