The document DMSO Based oxidizing reagents (Part - 2) - Reagents Chemistry Notes | EduRev is a part of the Chemistry Course Organic Chemistry.
All you need of Chemistry at this link: Chemistry

Whereas nucleophilic reducing agents react fast with electron-deficient carbonyl groups, the reactivity of electrophilic reducing agents such as R2AIH and BH3, characterized by their coordination with the carbonyl oxygen prior to hydride transfer, favor reductions of electron-rich carbonyl groups.Diisobutylaluminum Hydride (DIBAL-H)Diisobutylaluminum hydride (DIBAL-H) can be obtained commercially neat or in hydrocarbon solvents.Reductions with DIBAL-H must be carried out in the absence of air and moisture. DIBAL-H is a very versatile reagent for the selective reduction of appropriately substituted esters or nitriles to the corresponding aldehydes and for the reduction of lactones to lactols.

Reduction of Esters to Aldehydes In contrast to LAH reductions of esters, nitriles and lactones, where two hydrides are utilized, reductions of these compounds by DIBAL-H at low temperature can be stopped after the transfer of one hydride to the carbonyl carbon. Hydrolytic workup of the tetrahedral intermediates furnishes the corresponding aldehydes

Reduction of Vinyl Esters to Allylic

Alcohols DIBAL-H is the reducing agent of choice for regioselective reduction of a,p-unsaturated esters to allylic alcohols.86 Horner-Wadsworth-Emmons olefination followed by DIBAL-H reduction provides a tandem synthesis of (E)-allylic alcohols.

Diborane, B2H6, is a gas and is difficult to handle. However, borane complexed with donors such as THF or dimethylsulfide are commercially available and have become valuable reagents for the reduction of various functional groups. BH3. SMe2 is soluble in and unreactive toward a wide variety of aprotic solvents such as THF, Et2O, CH2Cl2, and hydrocarbons.An attractive feature of BH3·THF and BH3·SMe2 is the facile reduction of carboxylic acids to primary alcohols. The reduction involves initial formation of a triacylborate with concomitant evolution of 3 H2, followed by fast hydride transfer to the carbonyl carbon to furnish, after workup, the corresponding primary alcohol

Both BH3.THF and BH3.SMe2, allow the selective reduction of a –COOH group in the presence of other functional groups.

A summary of reactivities of BH3·THF toward various functional groups is shown in Table.  Reduction of saturated carboxylic acids with the borane derivative, thexylchloro-borane, provides a direct route to aldehydes without their prior conversion to carboxylic acid derivative. The aldehydes initially formed were isolated either as their bisulfite adducts or as their hydrazones, from which the aldehydes were regenerated.Table: Selectivity in BH3.THF Reductions.

Organoborane: Commercially available BH3·THF and BH3. SMe2 are the reagents of choice for hydroboration of alkenes. Except for a few very hindered double bonds, virtually all alkenes undergo hydroboration. The presence of a functional group may interfere with hydroboration. In such cases, it is often necessary to use a sterically hindered organoborane. Borane is a trifunctional molecule and reacts with alkenes to give three types of organoboranes:1. R3B, trialkylboranes: Found in monomeric form2. R2BH, dialkylboranes: Found in dimeric form3.  RBH2: Found in dimeric form Unhindered alkenes such as monosubstituted alkenes react rapidly with BH3 to produce R3B. While, moderately hindered alkenes and certain cycloalkenes also form R3B. However, control of the stoichiometry and reaction conditions permits the preparation of R2BH.

Generally, the diastereoselectivity in reductions of cyclic ketones with nucleophilic hydrides is determined not only by the steric congestion of the ketone but also by the nature of the nucleophilic reducing agent, as shown by the reduction of 3-methylcyclohexanone with various nucleophilic reducing agents.  Meerwein-Ponndog-Verley (MPV) reduction, involves treatment of a ketone with aluminum triisopropoxide [Al (OCHMe2)3]. This is an equilibration process favoring the more stable stereoisomer, which in the case of an alkyl-substituted cyclohexanone is the equatorial alcohol. 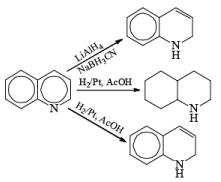