The document DNA Finger Printing, DNA Test and Cloning NEET Notes | EduRev is a part of the NEET Course Biology Class 12.
All you need of NEET at this link: NEET

These differences are called Polymorphism (many forms) and are the key of DNA typing. Polymorphism are most useful to forensic scientist. It consists of variation in the length of DNA at specific loci is called Restricted fragment. It is most important segment for DNA test made up of short repetitive nucleotide sequences, these are called VNTRs (variable number of tandem repeat).

VNTR's also called mini satellites were discovered by Alec Jeffery. Restricted fragment consist of hyper variable repeat region of DNA having a basic repeat sequence of 11-60 bp and flanked on both sites by restriction site.

1 . Extraction – DNA extracted from the cell by cell lysis . If the content of DNA is limited then DNA can be amplified by Polymerase chain reaction (PCR). This process is amplification. 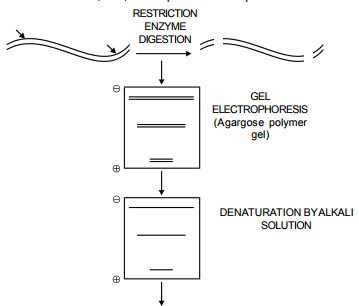 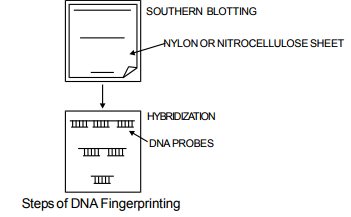 Hae III (Haemophilus  aegyptius) is most commonly used enzyme. It cuts the DNA, every where the bases are arranged in the sequence GGCC. These restricted fragment transferred to Agarose Polymer gel.

4 . Southern transfer / Southern blotting : The gel is fragile. It is necessary to remove the DNA from the gel and permanently attaches it to a solid support.

This is accomplished by the process of Southern blotting. The first step is to denature the DNA in the gel which means that the double-stranded restriction fragments are chemically separated into the single stranded form.

The DNA then is transferred by the process of blotting to a sheet of nylon. The nylon acts like an ink blotter and "blots" up the separated DNA fragments, the restriction fragments, invisible at this stage are irreversibly attached to the nylon membrane the "blot".

This process is called Southern blot by the name of Edward Southern (1970).

5 . Hybridization : To detect VNTR locus on re stricted fragment, we use single stranded Radioactive (P 32 ) DNA probe which have the base pair sequences complimentary to the DNA sequences at the VNTR locus. Commonly we use a combination of at least 4 to 6 separate DNA probes.

Labelled Probes are attached with the VNTR loci of restricted DNA Fragments, this process is called Hybridization.

6 . Autoradiography : Nylon membrane containing radio active probe exposed to X-ray. Specific bands appear on X-ray film. These bands are the areas where the radioactive probe bind with the VNTR.

These allow analyzer to identify a particular person DNA, the occurrence and frequency of a particular genetic pattern contained in this X-ray film. These x-ray film called DNA signature of a person, is specific for each individual.

1 . Paternity tests. The major application of DNA finger printing is in determining family relationships. For identifying the true (biological) father, DNA samples of Child, mother and possible fathers are taken and their DNA finger prints are obtained. The prints of child DNA match to the prints of biological parents.

2 . Identification of the criminal. DNA finger printing has now become useful technique in forensic (crime detecting) science, specially when serious crimes such as murders and rapes are involved. For identifying a criminal, the DNA fingerprints of the suspects from blood or hair or semen picked up from the scene of crime are prepared and compared. The DNA fingerprint of the person matching the one obtained from sample collected from scene of crime can give a clue to the actual criminal.

CLONINGClone is the exact carbon copy or copies produced by a single parent (mother or father) by non-sexual methods and are identical to their parent genetically and morphologically. Clone is a Greek word which means twig (Klon=twig). As all the branches of a tree are similar in morphology and genetical characteristics, in the same way clones are also similar to one another.Cloning is the process of producing many identical organisms (clone), generally used to produce new plants with similar characteristics. Microbes produce clones through asexual reproduction. In higher animals, clones are produced by nuclear transplantation technique in which the nucleus from a somatic cell is transferred into an unfertilized enucleated egg. The world's most famous sheep 'Dolly' was a clone produced by this method.Many plant species show vegetative reproduction. In these plants, the clones produced by a twig (detached shoot) are similar in their genotype as well as in phenotype (except environmental variations). Scientists have been much curious to apply this characteristics of plants on animals also to conserve the desired genotypes of some rare animals by making their clones. In higher animal, showing sexual reproduction, a zygote is formed after fertilization of the egg by spermatozoa. Zygote differs from its parents in genotype. It was revealed by the scientists through several experiments that only the egg and/or zygote has the potential to produce a whole individual from a single cell. J.B. Gurdon (1969) of Oxford University applied this fact while performing an experiment on frog. He destroyed the nucleus of an unfertilized egg of frog by treating with U.V rays and transferred the nucleus of intestinal epithelial cell of tadpole into the egg cell . In this experiment a few of the many transplanted eggs could develop into tadpoles. These developed tadpoles were identical in genotype and phenotype to their parents. This nuclear transplantation technique devised by Gurdon is still being used in cloning practice in some modified manner. A brief introductory history of cloning is given in table.In addition to the fact depicted in table attempts are continuously in progress in this field. In December, 2001 (report published in February, 2002) scientists at University, Texas, successfully produced the first cloned domestic pet named as copy cat (C.C). Further, in Aug. 2005 Woo-Sukhwang of South Korea produced the clone of an Afganian hound (Domestic dog used for hunting).

An Italian scientist Dr. S. Antenori is trying hard to produce human clone. It has triggered serious discussions and debates at global level, focussing on the medical and ethical issues.

Types of Cloning Cloning is an extensive technique, which is divided into following types, on the basis of the experimental material used -(1) Gene cloning (2) Microbial cloning (3) Cell cloning (4) Plant cloning and (5) Animal cloning

Animal cloning Embryonic cell in animals, are deprived of their totipotency by the time they enter into gastrula stage. So animal cloning is some what more difficult than plant cloning. On the basis of aims and end products animal cloning is of two types (i) Reproductive and (ii) Therapeutic.A clone of the whole animal is prepared in reproductive cloning. The techniques which are used in such cloning include blastomere separation, nuclear transplantation and the Honolulu technique.This technique can be used to conserve and increase the number of those animals which are threatened to be extinct in the near future.In nuclear transplantation technique, nucleus is removed from the egg obtained from the female. After then the nucleus of the desired cell (2n) is transferred into the enucleated egg cell which is then allowed to develop into an embryo in suitable conditions. The developing embryo is the clone of the donor cell from which nucleus was obtained for transplantation.

In Honolulu technique ( 1998-Teruhiko Wakayama - cloned mice) there is no fusion of the donor and recipient cells or its nucleus. Instead of ,nucleus from the donor cell which is in G0or G1, stage is substituted into enucleated egg cell (culture medium or chemical both is used in place of electric shock to stimulate development).

Therapeutic cloning technique may prove to be very useful in the field of medical science, particularly when there is a need for the transplantation to replace some damaged and diseased organ or tissue by a healthy organ from a suitable donor. In such condition, if the cells from the patient himself are taken and cultured to form desired organ. The organs developed in such manner( organ cloning) will be easily acceptable by the patient, and there will be no possibility of its rejection as often occurs otherwise.

A number of diseases like will be no possibility of its rejection as often occurs otherwise . A number of diseases like parkinsonia, alzheimer, diabetes and diseases related with kidneys will possibly be cured in future by the application of cloning technique. "Dolly" sheep was produced by using nuclear transfer technique by Dr. Ian Wilmut and his colleagues at Roslin Institute of Scotland in 1997.They used somatic cells from udder (mammary glands) for forming this clone. One udder cell with its nucleus intact was selected because this nucleus carried the mother's genetic information. 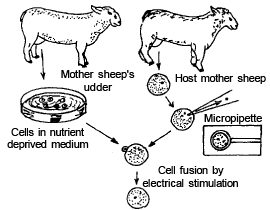 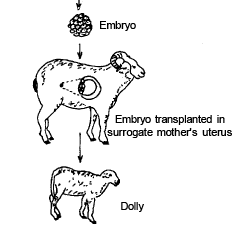 Meanwhile, and unfertilized egg cell was taken from a different sheep. Its nucleus was sucked out and an enucleated egg cell was obtained. After then the udder cell nucleus was fused with the enucleated egg cell under electrical stimulation. Now this egg cell had the mother's nucleus. At last the fused egg was implanted into the uterus of surrogate mother, other than the egg donor where it grew into a lamb. Thus the Dolly was born, as a genetically identical copy of its mother.

1. This technique can be used to improve the breeds of live-stock used in agriculture.

2. Cloning is helpful for providing many useful substances and chemicals required for human body, and also in the cloning of such animals which can be used as a source of organs for transplantation purpose in medical practices.

3. British scientists have been successful in obtaining alpha anti-trypsin from sheep for curing an incurable disease emphysema and clotting factor- ix for curing hemophilia. It has been possible by the use of genetic engineering.

4. Many incurable diseases which are not curable so far, may be cured effectively in near future by applying the processes relating with cloning and genetic engineering.

5. Cloning is useful to increase the number of individuals of those species which are at the edge of extinction, thus helpful in conservation of biodiversity.

At present, the issue of cloning has been a matter of discussion and disputes among the scientists and the sociologists. Many questions are being raised with regards to the ethical, moral, and social aspects of cloning.Doubts have also been there about the health and ageing of clones and the misuse of cloning.Cloning has important role in treatment of serious and non-curable diseases, a view that is favoured by most scientists, however there is no agreement on the issue of human cloning.