What is Dalton's Atomic Theory?

What is matter made up of? What is the smallest indivisible unit of Matter?

Tip:Maharishi Kanad an ancient Indian sage, scientist and philosopher who lived in the 6th to 2nd century(actual dates not available ) first gave the atomic theory and called matter as "padarth" and atom as "parmaanu" He explained the creation and existence of universe by his Atomic before much before John Dalton gave one.

Atom is the basic unit of life. A molecule is a compound made up of 2 or more atoms held by chemical bonds. The mixture is a combination of pure substances in a ratio. Ion is either positively or negatively charged. 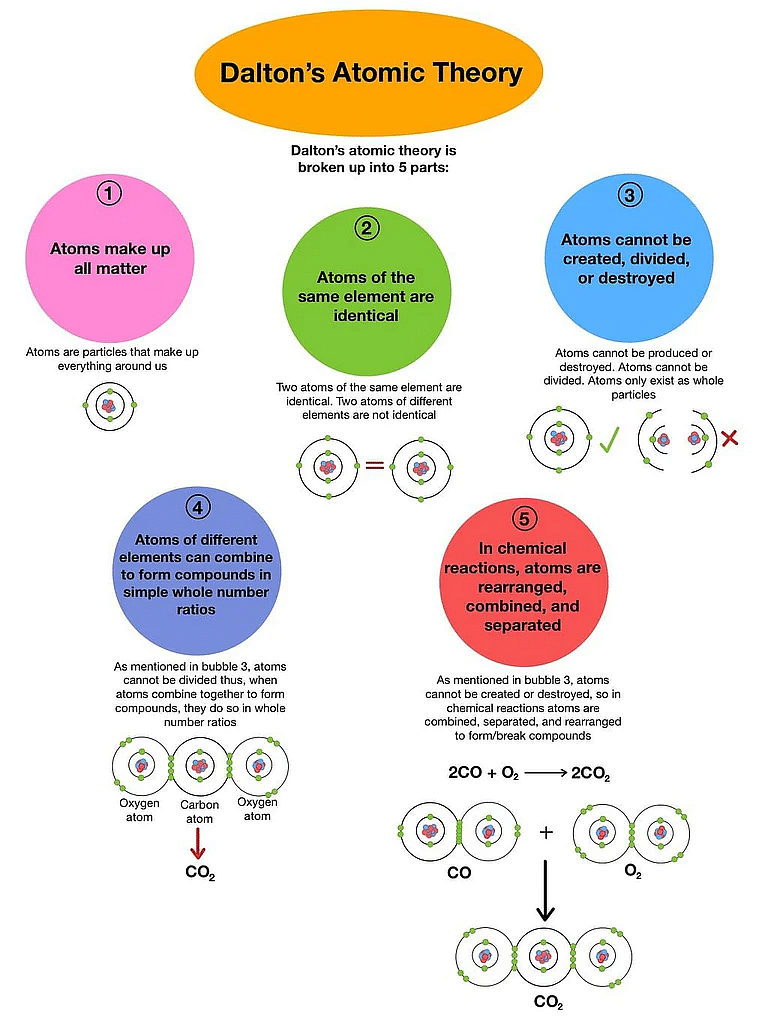 However, this theory is not entirely free of limitations. Let us now look at the drawbacks of this theory.

Example 1: Give the supporting laws for Dalton’s Atomic Theory.

John Dalton based his theory on two laws. They are explained below:

Example 1: Which of the following is not a postulate of Dalton’s Atomic Theory?(a) Matter is made up of extremely small particles called atoms or molecules.(b) Atom is the smallest particle that takes part in a chemical reaction. (c) Atoms combine together in a simple whole-number ratio to form compound atoms.(d) Atoms of two different elements may combine to form two or more compound atoms.

Matter is made up of extremely small particles called atoms (not molecules).

Example 2: Which of the following laws could not be explained by Dalton’s Atomic Theory?(a) Law of constant composition(b) Law of multiple proportions(c) Law of reciprocal proportions(d) Gay Lussac’s law of gaseous volumes

Gay Lussac’s law of gaseous volumes could not be explained by Dalton’s Atomic Theory.