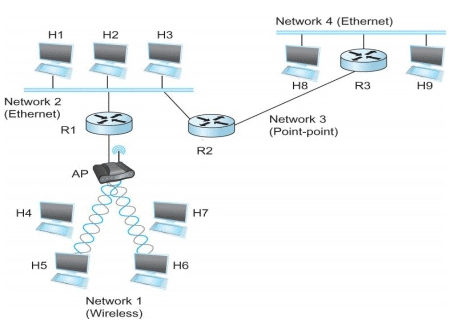 Most host Operating Systems provide a way to manually configure the IP information for the host. Drawbacks of manual configuration

(RARP) is a Link layer networking protocol. RARP is described in internet EngineeringTask ForceETF) publication RFC 903. It has been rendered obsolete by the Bootstrap Protocol (BOOTP) and the modern Dynamic Host Configuration Protocol(DHCP). BOOTP configuration server assigns an IP address to each client from a pool of addresses. BOOTP uses the User Datagram Protocol (UDP) Forwarding: – to select an output port based on destination address and routing table

Routing: –   process by which routing table is built

– A row in the forwarding table contains the mapping from a network number to an outgoing interface and some MAC information, such as Ethernet Address of the next hop

–   Generally contains mapping from network numbers to next hops

– For a simple network, we can calculate all shortest paths and load them into some nonvolatile storage on each node.

–   Such a static approach has several shortcomings

–   It does not deal with node or link failures

–   It does not consider the addition of new nodes or links

–   Need a distributed and dynamic protocol 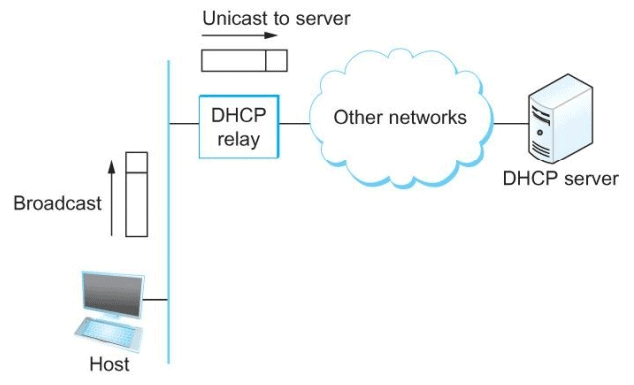 Slightly different circumstances can prevent the network from stabilizing

Use some relatively small number as an approximation of infinity.  For example, the maximum number of hops to get across a certain network is never going to be more than 16. One technique to improve the time to stabilize routing is called split horizon. When a node sends a routing update to its neighbors, it does not send those routes it learned from each neighbor back to that neighbor

For example, if B has the route (E, 2, A) in its table, then it knows it must have learned this route from A, and so whenever B sends a routing update to A, it does not include the route (E, 2) in that update.  In a stronger version of split horizon, called split horizon with poison reverse. B actually sends that back route to A, but it puts negative information in the route to ensure that A will not eventually use B to get to E

For a host with only one interface and only a default router in its forwarding table, this simplifies to

Classless Inter-Domain Routing:  A technique that addresses two scaling concerns in the Internet. The growth of backbone routing table as more and more network numbers need to be stored in them Potential exhaustion of the 32-bit address space

Address assignment efficiency:  Arises because of the IP address structure with class A, B, and C addresses. Forces us to hand out network address space in fixed-size chunks of three very different sizes.  A network with two hosts needs a class C address. Address assignment efficiency = 2/255 = 0.78. A network with 256 hosts needs a class B address

Problem with this solution. Excessive storage requirement at the routers. If a single AS has, say 16 class C network numbers assigned to it, Every Internet backbone router needs 16 entries in its routing tables for that AS. This is true, even if the path to every one of these networks is the same If we had assigned a class B address to the AS.  The same routing information can be stored in one entry

CIDR tries to balance the desire to minimize the number of routes that a router needs to know against the need to hand out addresses efficiently. CIDR uses aggregate routes Uses a single entry in the forwarding table to tell the router how to reach a lot of different networks.  Breaks the rigid boundaries between address classes