The document Data to Statistics Mathematics Notes | EduRev is a part of the Mathematics Course Additional Topics for IIT JAM Mathematics.
All you need of Mathematics at this link: Mathematics

Grouped Data:-Grouped data is data that has been organized into groups known as classes. Grouped data has been 'classified' and thus some level of data analysis has taken place, which means that the data is no longer raw.A data class is group of data which is related by some user defined property. For example, if you were collecting the ages of the people you met as you walked down the street, you could group them into classes as those in their teens, twenties, thirties, forties and so on. Each of those groups is called a class.Each of those classes is of a certain width and this is referred to as the Class Interval or Class Size. This class interval is very important when it comes to drawing Histograms and Frequency diagrams. All the classes may have the same class size or they may have different classes sizes depending on how you group your data. The class interval is always a whole number.Below is an example of grouped data where the classes have the same class interval.

Solution: Below is an example of grouped data where the classes have different class interval. 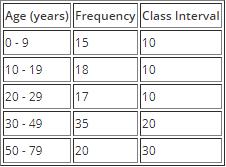 Calculating Class Interval:- Given a set of raw or ungrouped data, how would you group that data into suitable classes that are easy to work with and at the same time meaningful?The first step is to determine how many classes you want to have. Next, you subtract the lowest value in the data set from the highest value in the data set and then you divide by the number of classes that you want to have:

Example 1: Group the following raw data into ten classes.Highest Number = 29Solution: The first step is to identify the highest and lowest number Class interval should always be a whole number and yet in this case we have a decimal number. The solution to this problem is to round off to the nearest whole number.In this example, 2.8 gets rounded up to 3. So now our class width will be 3; meaning that we group the above data into groups of 3 as in the table below.