The document Dealing with Branches Computer Science Engineering (CSE) Notes | EduRev is a part of the IT & Software Course Digital Electronics.
All you need of IT & Software at this link: IT & Software

Dealing with BranchesUntil the instruction is actually executed, it is impossible to determine whether the branch will be taken or not. A variety of approaches have been taken for dealing with conditional branches:• Multiple streams• Prefetch branch target• Loop buffer• Branch prediction• Delayed branch

Multiple Streams A simple pipeline suffers a penalty for a branch instruction because it must choose one of two instructions to fetch next and may make the wrong choice.

A brute-force approach is to replicate the initial portions of the pipeline and allow the pipeline to fetch both instructions, making use of two streams. There are two problems with this approach:• With multiple pipelines there are contention delays for access to the registers and to memory.• Additional branch instructions may enter the pipeline (either stream) before the original branch decision is resolved. Each such instruction needs an additional stream.

Loop Buffer A loop buffer is a small, very-high-speed memory maintained by the instruction fetch stage of the pipeline and containing the n most recently fetched instructions, in sequence. If a branch is to be taken, the hardware first checks whether the branch target is within the buffer. If so, the next instruction is fetched from the buffer.

Figure 3.8 gives an example of a loop buffer 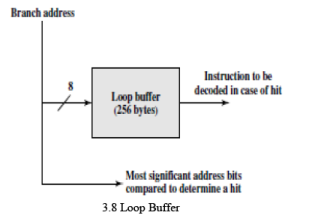 Branch Prediction Various techniques can be used to predict whether a branch will be taken. Among the more common are the following:• Predict never taken• Predict always taken• Predict by opcode• Taken/not taken switch• Branch history table

Delayed Branch It is possible to improve pipeline performance by automatically rearranging instructions within a program, so that branch instructions occur later than actually desired.

Offer running on EduRev: Apply code STAYHOME200 to get INR 200 off on our premium plan EduRev Infinity!
Download EduRev app here for IT & Software preparation.