Numerous methods are available for the determination of beam deflections. These methods include:

where x and y are the coordinates shown in the figure of the elastic curve of the beam under load,

The first integration y'(dy / dx) yields the Slope of the Elastic CurveSecond IntegrationEIy = -∫∫MThe second integration y gives the Deflection of the Beam at any distance x.

(i) Theorems of Area-Moment Method

3. Method of SuperpositionThe method of superposition, in which the applied loading is represented as a series of simple loads for which deflection formulas are available. Then the desired deflection is computed by adding the contributions of the component loads(principle of superposition).

1. Concentrated load at the free end of cantilever beam 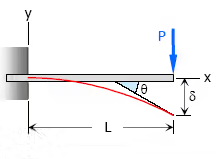 2. Concentrated load at any point on the span of the cantilever beam 3. Uniformly distributed load over the entire length of the cantilever beam

4. Triangular load, full at the fixed end and zero at the free end 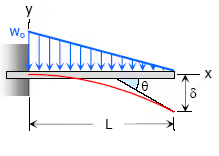 5. Moment load at the free end of the cantilever beam

6. Concentrated load at the midspan of simple beam

7. Uniformly distributed load over the entire span of simple beam 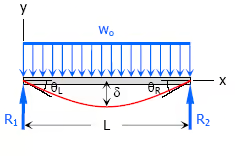 8. Triangle load with zero at one support and full at the other support of simple beam

9. Triangular load with zero at each support and full at the midspan of simple beam